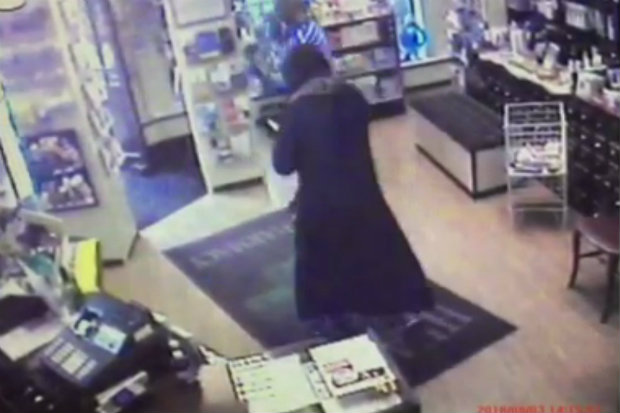 Police in Calderdale are investigating a robbery in which pharmacy staff were held at knifepoint.

Amanda Smith, pharmacist manager at Heath Pharmacy on Free School Lane, Halifax, told C+D she had just opened for the afternoon last Friday (August 3) when a man with a scarf covering his face and holding a “big knife in his hand” burst in and stole controlled drugs and cash.

“He started shouting to open the [controlled] drugs cabinet really aggressively,” Ms Smith said. “I tried to keep him calm, got the keys and went to open it. He took four bottles of methadone that I had measured out for the weekend and seven fentanyl patches.”

The man, who police described as Asian, around 5ft 8ins tall and wearing “traditional Asian dress”, then demanded pharmacy staff fill a bag with diazepam and the contents of the cash register.

“We’ve had a couple of break-ins overnight [before] but nothing like this,” Ms Smith told C+D. “We say to staff [in the event of a robbery] ‘don’t argue just give them what they want’, and we show everyone where the panic button is.

“It just seemed so surreal. When he walked in with a knife [I was] looking at it and thinking ‘is this really happening’?”

I don’t think we could have dealt with it any better,” she added. “All I could think about was keeping him calm.”

Pharmacy dispenser Denise Briscoe was also in the store at the time of the raid. She told C+D that she pressed the panic button and fled the premises, along with checking technician Rachel Mitchell and another member of staff, to raise the alarm.

“I knew something was up straightaway,” Ms Mitchell said. “He had the knife and he charged forward. The whole thing only lasted two minutes, but it felt like forever.”

Local patients have rallied to support the pharmacy staff in the days since the robbery, she said. “A lot of customers are asking about it and if we are alright. We had a lovely card through the letterbox this morning saying, ‘hope you’re ok’.”

Detective inspector Gary Stephenson, of West Yorkshire Police’s Calderdale district criminal investigation department, said: “It is a concern when any prescription medication is stolen, as it can potentially be dangerous if taken other than recommended by healthcare professionals. We would urge anyone offered such drugs to report it to the police as a matter of urgency.

“We would also like to hear from anyone who saw a male matching the suspect’s description in the Savile Park area around the time of this robbery, or with any other information that could help our ongoing investigation.”

Last year, a C+D investigation exclusively revealed the extent and severity of crime that pharmacists and their staff face across the UK Read C+D's in-depth analysis of the pharmacy crime data and view an interactive map of crime data from UK's 45 police authorities here.

CCTV footage from the robbery can be seen below:

Have you experienced a crime in your pharmacy?