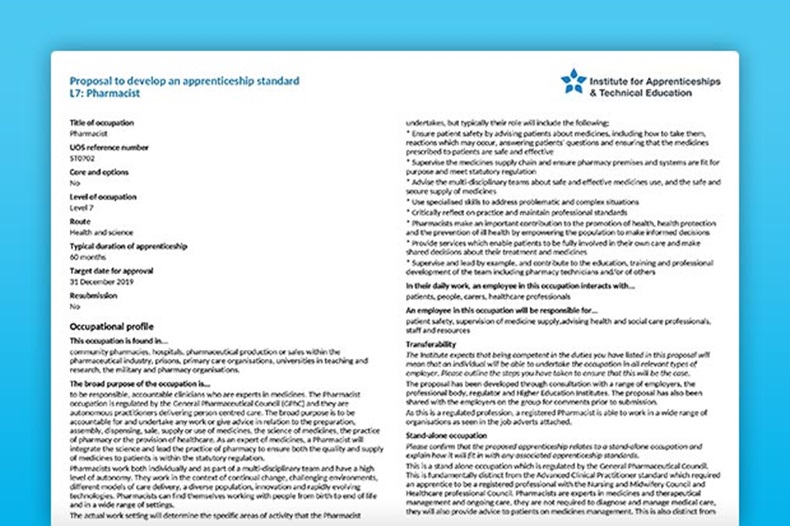 Pharmacists could qualify through a five-year apprenticeship scheme led by employers, according to proposals set out in a consultation which closes on Sunday (April 14).

The Institute for Apprenticeships and Technical Education – an employer-led public body not affiliated with a government department – launched the 10-day consultation, which runs until Sunday (April 14).

Pharmacists would train as apprentices on placements hosted by pharmacy companies.

The proposal was developed following discussions “with a range of employers”, the Royal Pharmaceutical Society, the General Pharmaceutical Council (GPhC) and universities, the institute claimed.

However, the GPhC said its involvement was limited. “We have not contributed to drafting these proposals. We have attended two meetings to explain regulatory requirements in our role as the pharmacy regulator,” it told C+D today.

The consultation is at the first of three stages with the aim of finding out if industry professionals support it.

The consultation response document says it should take “no more than 10 minutes to complete”. It asks seven questions including “do you support the development of the apprenticeship standard set out in the proposal?” and “do you recognise this occupation?”.

“Pharmacists are experts in medicines and therapeutical management and ongoing care, they are not required to diagnose and manage medical care, they will also provide advice to patients on medicines management,” the institute said in the consultation document.

The institute defines apprentices as “a job with training to industry standards”.

They are “employer-led: employers set the standards, create the demand for apprentices to meet their skill needs, fund the apprenticeship and are responsible for employing and training the apprentice”.

Apprentices need “to achieve competence in a skilled occupation, which is transferable and secures long-term earnings power, greater security and the capability to progress in the workplace”.

A “trailblazer group” of employers who are reflective of a sector form the standards of apprenticeships, the Institute for Apprenticeships and Technical Education said in a general definition.

To become a trailblazer group employers need to submit a proposal to the institute.

The standards would be “based upon occupational standards”, it said.

“An occupational standard is a short and concise document that describes what someone who is competent in the occupation does – ‘duties’, and the ‘knowledge, skills and behaviours’ required to carry out the duties competently; along with any qualifications that must be taken and alignment with professional recognition if applicable,” the institute continued.

Apprentices have to take an “independent assessment” at the end of their training to “confirm that they have achieved occupational competence”.

The trailblazer group would develop the assessment “to test competence against your occupational standard”.

The GPhC said: “Any course would need to meet our standards and would need to be accredited by us, and any trainees would need to pass our registration assessment before coming on to the register.”

It is currently unclear how pharmacy apprenticeships will work with pharmacy degrees.

The Pharmacists’ Defence Association (PDA) urged pharmacists to respond to the “surprise” proposals, as a pharmacist apprenticeship would lead to a “reduction in standards and deprofessionalisation”, it claimed.

“The profession has not been widely engaged or consulted as to whether it wants an apprenticeship to be introduced. On that basis alone it should not proceed,” the PDA stressed.

Some CCA members involved in proposals

The Company Chemists’ Association (CCA) said some of its members are part of the Pharmacy Apprenticeship Trailblazer Group behind the proposals, though the organisation is not directly. It represents Boots, Lloydspharmacy, Well, Rowlands and Superdrug, as well as the pharmacy arms of Morrisons, Tesco and Asda.

The trailblazer group involves other pharmacy employers who are not CCA members, as well as “hospital employers and pharmaceutical employers”, it said.

The group has been developing apprenticeship standards for pharmacy assistants and pharmacy technicians “for some time”.

But “the proposal for a pharmacist degree apprenticeship is only in the very explorative stage”, the CCA stressed.

The RPS said it has not contributed to trailblazer “up to now”.

“We were notified by the trailblazer group that they were exploring this recently,” it said.

“We will work with our members on whether [apprenticeships] are suitable as a route to registration as a pharmacist.

“The RPS will be feeding in our views at the appropriate time to make sure the profession's voice is heard.”

The RPS is looking for views from the profession on apprenticeships via email.

“The degree apprenticeship approach is also being taken by other healthcare professions and has been successful in areas such as engineering in improving the number of people able to access the degree.”

Read more about the proposals from an apprenticeship expert.

What do you make of proposals for a pharmacist apprenticeship scheme?