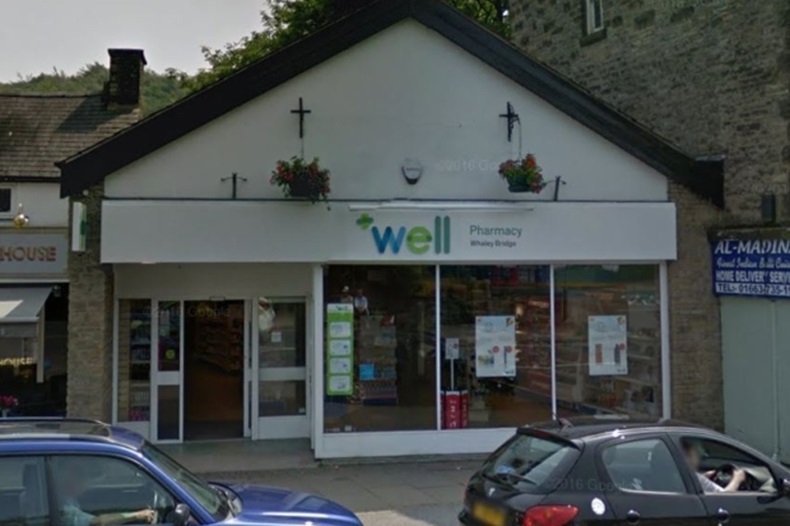 The Well branch on Market Street was closed in August during the evacuation (Credit: © 2019 Google, image capture: June 2016)

NHS England's Dr Bruce Warner has visited a pharmacist to personally thank him for his "heroism" during the evacuation of a Derbyshire town at risk of flooding.

More than 1,500 residents of the town of Whaley Bridge, Derbyshire, were evacuated from their homes in August, due to the risk of the local Toddbrook Reservoir breaching and flooding the surrounding areas.

The Well pharmacy in the town was closed during the evacuation. However, branch manager Raj Modi worked with police to ensure the most vulnerable patients were not affected, including hand-delivering some urgent medicines and sharing his personal number with local radio stations and on social media pages.

It is “clear Raj really cares about his patients and local community, putting his own safety to one side to care for those who needed it most at a very difficult time”, Dr Warner said.

He represents the “values of the NHS” and “he and his whole team deserve to be recognised, not just for their acts during the dam crisis, but for their essential work day in day out”, Dr Warner added.

NHS England’s medical director Stephen Powis said Mr Modi “embodies the best of the NHS, which is there for people come hell or, in this case, high water”.

Pharmacists are “a crucial part” of community health services, he added.

Mr Modi said he has been “very humbled” by the reaction, but “any pharmacist in my position would have done what I did”, he told C+D this morning.

While he might have received the media attention, “it's a team effort”, he stressed.

“My pharmacy team were brilliant. When the police told me about the [branch] being shut, we just acted straight away and opened a second dispensary down the road.”

Helping vulnerable residents of Whaley Bridge “felt like an obvious thing to do for all of us and we're pleased our actions could help so many”, Mr Modi added.

Dr Warner's visit to the pharmacy “went really well” and gave them a chance to discuss the new pharmacy funding contract and various services being piloted in the area, Mr Modi explained.

He also took the opportunity to give Dr Warner a flu vaccination during the visit, he said.

It is clear that Dr Warner is “very pro-pharmacy and he really wants to use pharmacists”, Mr Modi said.

Have you ever had to supply medicines during an emergency?