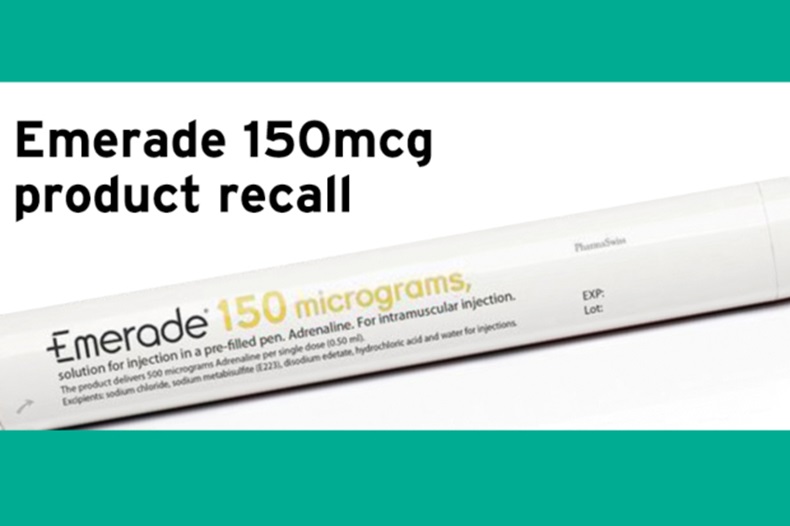 Patients should return their unexpired Emerade 150 micrograms auto-injectors to their pharmacy, as some pens have failed to activate, the MHRA has said.

The Medicines and Healthcare products Regulatory Agency (MHRA) issued the recall yesterday (March 4) after the manufacturer, Pharmaswiss Česka republika – an affiliate of Bausch & Lomb UK – flagged an error in one component of the pens believed to have caused some to not activate.

The MHRA said patients should return their auto-injectors only once they have been supplied an alternative brand – such as EpiPen or Jext – at their local pharmacy.

Pharmacies receiving the Emerade 150mcg pens should quarantine them and return them to the supplier, the MHRA said.

The manufacturing defect also affects the 300 and 500mcg strengths of Emerade adrenaline pens, but these are not being recalled as “there are insufficient supplies of alternatives to provide replacements”, the MHRA added.

Pharmacists should reassure patients who have 300 and 500mcg strengths of Emerade pens that the “majority of pens will still activate”, the MHRA said.

Emerade 150mcg pens – which are used for the emergency treatment of anaphylaxis in children – are being recalled following reports from both patients and the manufacturer that some injectors have failed to activate.

The manufacturer told the MHRA that, following manufacturer-led tests on Emerade auto-injectors recalled from patients in Europe, it found that about 13% of pens need “higher than normal force to activate, implying a higher risk of activation failure than was previously understood”.

The MHRA issued a pharmacy-level recall of all Emerade pens in November last year, after the manufacturer found that a fault in one part of the injectors would prevent pens from activating. It said this problem is more likely to occur when pens are exposed to temperatures higher than 25°C.

“We are continuing to work closely with the MHRA and are continuing to conduct a thorough investigation. Replacement unaffected stock is not available to order at this time”, Bausch & Lomb UK told C+D today (March 5).

“No further supplies of Emerade will be available until the issue has been fully resolved,” it added.

When replacing the Emerade 150mcg auto-injectors with an alternative brand, pharmacists should “ensure they provide training to patients and carers on the correct use of the new pen, the MHRA said.

“Training pens that do not contain adrenaline can also be obtained free of charge from the manufacturers”, it said.

The Department of Health and Social Care issued a supply disruption notice for the Emerade 500mcg device in August last year, which Bausch & Lomb UK said had been caused by manufacturing issues at its Swedish partner company.

Have you received many Emerade 150mg pens so far?

Pharmacies to 'validate' which patients get adrenaline auto-injectors