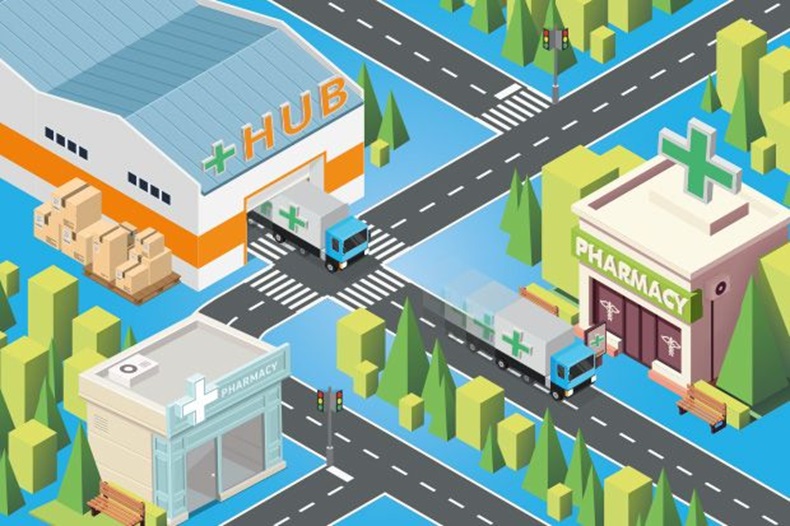 Lloydspharmacy has revaluated the number of branches suitable for its hub-and-spoke model after finding that it only works for “some” pharmacies, C+D has learned.

The multiple had originally planned for 900 of its pharmacies to use one of its three dispensing hubs – in Warrington, Ruislip and Bristol – a McKesson UK spokesperson told C+D last week (October 12).

However, since last year the multiple has reviewed this number because there are branches where the benefits of hub-and-spoke are not “realised by all” due to the pharmacy’s “size, staffing levels, the level of repeat dispensing and mixture of the workload”, the spokesperson added.

Other reasons contributing to the multiple’s decision to reconsider the number of pharmacies using its hubs include a change in GP prescribing habits, “changes to our estate” and “changing customer habits brought about by Echo subscriptions” – Lloydspharmacy’s prescription management app – the spokesperson said. Currently, 560 Lloydspharmacies utilise the hubs.

However, the multiple recently identified an additional 80 pharmacies that could “benefit from sending offsite”. This will see the number of branches using the hubs increase to around 640 in the next 10 weeks, the spokesperson added.

Toby Anderson, CEO at McKesson UK – Lloydspharmacy and AAH's parent company – told C+D in an interview last month (September 10) that “for us at least, hub dispensing is not the solution for all pharmacies”.

“What we would rather do is for the stores that are connected to and are right to use the hubs [to] try and utilise more of our spending volume through [our] hubs. Rather than a little bit across all stores, it works better for us to have a more focused effort for a selected number of stores,” Mr Anderson added.

“Not the answer to all our efficiency challenges”

Mr Anderson told C+D that he thinks the branches that are currently using McKesson UK’s hubs do “really like it”.

“There's a bit of hard work at the beginning. The important thing is making sure that everybody's clear and trained on how [to] adjust [to the new model].

“If you ask pharmacies now, what it would be like to take it away? Most would say no,” he added.

McKesson UK is “open to exploring ” the option of letting non-Lloyds pharmacies use its hub-and-spoke system if regulations around the model change, Mr Anderson said.

But he said that while the dispensing hubs are a “good tool to have in the toolbox” they are “not the final answer to all of our efficiency challenges”.

This technology is “not necessarily the sort of the silver bullet that everyone's looking for. I think it could be part of the solution. But it's definitely not the solution to how we continue to evolve pharmacy in [this] country,” he added.

Read our exclusive interview with Lloydspharmacy CEO Toby Anderson to find out what the multiple is doing to prevent further closures, its experience of the COVID-19 pandemic and more on hub-and-spoke.

What do you make of the hub-and-spoke model?

'Legal changes for hub-and-spoke and mergers will impact pharmacies'