A campaign calling on the government to waive the need for English pharmacies to repay the £370 million in advance COVID-19 funding has gained nearly 40,000 signatures. 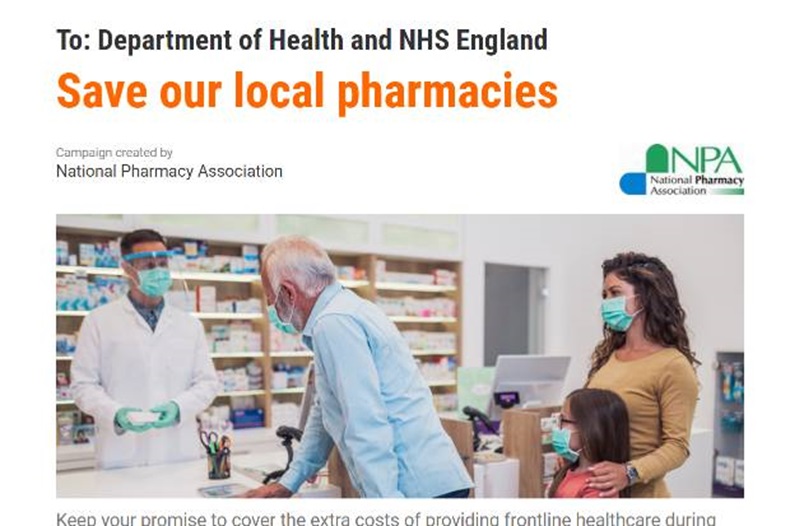 The “save our local pharmacies” campaign was launched by the National Pharmacy Association (NPA) on the campaign platform 38 Degrees last week (December 10) and has garnered 39, 405 signatures at the time of writing.

The petition highlights the work done by pharmacies across the country since March, “playing a vital role in the nation’s response to the COVID-19 pandemic” and helping to ease the burden on primary care and emergency services.

However, the government has not done enough to help community pharmacy meet the challenges presented by COVID-19, the petition states. One third of “family-owned pharmacies in England” are already in deficit, with some being forced to close, the NPA said.

“Many more family-owned pharmacies in England could soon be forced to shut their doors unless the government acts,” it added.

“The first step” in preventing further community pharmacy closures is to ensure pharmacies are allowed to keep the £370m in “advance funding” the sector this year received to help it cope with the additional pressures and challenges imposed by the COVID-19 pandemic, the petition states.

“This money was spent by pharmacies to provide vital healthcare and the government must keep its promise to cover these extra cost”, according to the petition, which also outlines that pharmacies faced “crippling extra costs of staying open during the pandemic”.

Campaign organisation 38 Degrees stressed the crucial role pharmacies have played during the pandemic. Campaign manager Cathy Warren said: “Community pharmacies are a critically important part of our healthcare system. During the pandemic they’ve been a lifeline providing vital healthcare for people up and down the country.

“No one wants to see their local pharmacy close its doors because of a lack of financial support. That’s why thousands of members of the public are coming together to call on the government to give community pharmacies the cash injection they desperately need.”

NPA chair Andrew Lane called on community pharmacists and the general public to sign the petition to underline the seriousness of the issue to the government.

"It’s great that such a high profile citizens group has taken this cause on, because it gives the general public an opportunity to have their say on a matter of importance to their daily lives and the lives of their loved ones,” Mr Lane said.

The NPA also wants “pharmacists and many others working in and around the community pharmacy sector to sign the petition,” he added.

"This is a simple way to make your feelings known about how pharmacies should be supported. A petition by itself is rarely enough to guarantee a change for the better, but it does remind the powers that be that people across the country really care about the future of this vital healthcare network,” Mr Lane said.

Previous calls for £370m to be written off

The campaign comes after a report commissioned by the NPA and compiled by accountancy firm Ernst & Young predicated that under current funding 72% of community pharmacies will be in debt by 2024. The report, published in September, also projected a £497m deficit for the sector by 2024.

The NPA campaign echoes previous calls for the government to write off the £370m advanced to the sector during the pandemic. Some eight out of 10 community pharmacy contractors responding to an all-party pharmacy group (APPG) survey last month (November 17-30) said the sum had not been enough to manage the crisis.

The APPG earlier this week (December 14) urged the government not to ask the sector to pay the money back.

In October, the Pharmaceutical Services Negotiating Committee asked for the £370m advance payment “to be written off against the costs of COVID-19 to contractors for a particular period of time”.

This is being “carefully considered” by the Department of Health and Social Care, a spokesperson for the department said last month (November 12).

Data released by the NHS Business Services Authority (NHSBSA last month (November 19) showed that England currently has the lowest number of pharmacies since 2015/2016, driven by a 63% increase in community pharmacy closures.

Have you signed this petition?