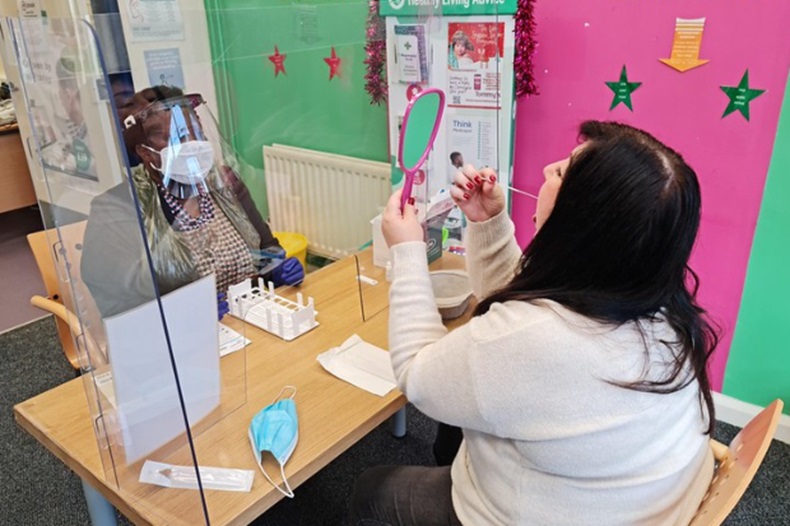 Pharmacies in Dudley have this week started offering free COVID-19 tests for asymptomatic residents as part of a national pilot scheme.

There are currently 23 independent pharmacies participating in the scheme, which sees residents without symptoms receive rapid lateral flow antigen tests for COVID-19.

Michelle Dyoss, vice chair of Dudley local pharmaceutical committee (LPC) – through which community pharmacies in the borough are delivering the service – told C+D earlier this week (December 16) that there will be “more [pharmacies] participating after Christmas, so we could be up to 40.”

The free tests can be booked online and patients swab their nose and throat themselves, “with the person trained at the pharmacy supervising”, before putting the swab into a test tube that “the pharmacy takes over”, Ms Dyoss explained.

The test result is communicated to the patient via text or email in 20-30 minutes.

In a statement earlier this week (December 14) Dudley Council, which introduced the scheme, encouraged residents to get tested, stating that: “The tests will play a huge part in breaking the chain of infection so it’s important that people use them”.

"[This pilot] is extremely important. Our pharmacies are really enthusiastic and want to provide the service because they are protecting residents in the community,” Ms Dyoss said of community pharmacy’s role in the initiative.

“Making the test more accessible for the community”

"Because of the press release that went out on Monday, pharmacies are getting calls. I have just spoken to one pharmacist and he's had 20 calls just this morning. So it's going to be very popular, which is great,” Ms Dyoss added.

Initially, “the worry [was] whether patients will come forward to get tested” but based on the early response from the community, “I don’t think we'll have that concern anymore,” she said. “I think over the Christmas period in particular, people may want to be tested so they know they are safe to spend time with loved ones."

The LPC is also encouraging pharmacy staff to get tested. “They are frontline workers, so they get tested twice weekly as part of the pilot,” said Ms Dyoss.

One of the pharmacies participating in the pilot is Jhoots Pharmacy. Area manager for Dudley Leigham Reynolds told C+D earlier this week (December 16) that there has been high demand for tests since the start of the pandemic in March and this service will help cater to that demand and ease pressure on hospitals.

"It's making the test more accessible for the community. When people go into the local chemist, while picking up their medication, they can also have a test done,” Mr Reynolds said. Since the start of the pandemic, with GPs largely “closing their doors”, pharmacies have also seen “huge footfall and extra demand, so by providing this extra service, you are picking up the footfall”, he added.

Last month, Boots staff in Liverpool trained 2,000 members of the army on “swabbing and safety technique” as part of a city-wide COVID-19 pilot announced by the prime minister on November 3.

The Dudley pilot launches as NHS England and Improvement (NHSE&I) confirmed on Wednesday (December 16) that community pharmacy contractors would this week be able to start ordering lateral flow antigen test for “asymptomatic patient-facing staff” – following an invitation to do so from Primary Care Services England.

Contractors will be able to order one box, each containing 25 lateral flow tests, for each eligible employee. Closing dates for orders is December 30, with deliveries expected to begin “from early January”, NHSE&I said in a letter to contractors.

This follows an announcement in November of an upcoming rollout of COVID-19 testing for asymptomatic staff working in community pharmacies in England.

What do you make of this pilot?