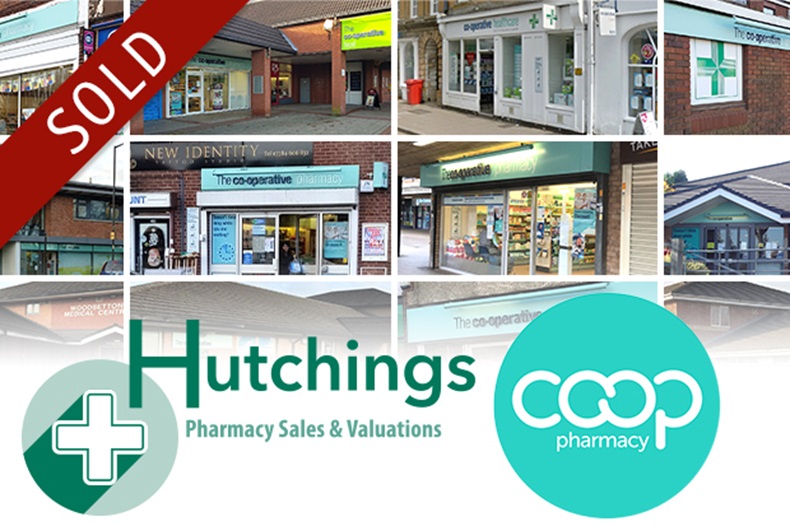 Hutchings Consultants oversaw the sale of 22 branches to various buyers

The Midcounties Co-operative group has so far sold 28 of its 30 branches for an undisclosed sum, it has told C+D.*

The group is set to complete the sale of one more branch in May, while it will retain one bricks-and-mortar pharmacy from which it will offer its digital services, a spokesperson told C+D today (April 29).

“This is part of a strategic decision made by the society to focus on its digital healthcare offering through the Your Co-op Pharmacy website, in order to ensure that the society can meet the healthcare needs of all its members, regardless of their location,” they added.

Pharmacy broker Hutchings Consultants completed the sale of 22 of the group’s 30 branches. It told C+D that “staff retention was a prerequisite as buyers were selected”, as The Midcounties Co-operative had made clear it wanted to safeguard the existing pharmacy teams.

It is not clear who the other agents involved in the sale of the remaining seven pharmacies are.

Touchwood Pharmacy acquired seven of the 22 branches sold through Hutchings Consultants, which are sited across the West Midlands, Oxfordshire, and Gloucestershire and are either part of a medical centre or community-based pharmacies.

The purchase of the seven Midcounties Co-op branches takes Touchwood Pharmacy to a total of 22 branches, according to director Farook Ahmed.

“The new staff have been fantastic, and we are happy to have inherited such a great team,” Mr Ahmed added.

The remaining 15 Midcounties branches on sale were acquired by several existing independent owners who already have branches close by, a Hutchings Consultants spokesperson told C+D.

A “great deal of activity”

Hutchings Consultants director Scott Hayton said there is “currently a great deal of activity in the market at all levels, driven by a growing demand among buyers to acquire, which extends to group opportunities such as The Midcounties Co-operative”.

“Buyers are still selective in terms of their requirements, but where synergies with existing units and growth can be identified within the target business, terms for a deal can likely be agreed swiftly,” Mr Hayton added.

Hutchings Consultants registered a 45% increase in new buyer registrations during the first lockdown in March 2020, which continued throughout the year, it said in a new year update published in January.

In 2019, C+D revealed that The Midcounties Co-operative group had listed 22 of its pharmacies on a broker website to assess their value. At the time, the group told C+D it was planning to retain eight branches located within Co-op food stores.

C+D has approached the group to ask if it still plans to retain the remaining eight pharmacies.

*The story was updated at 3.45pm on April 29 to reflect The Midcounties Co-operative's comments.