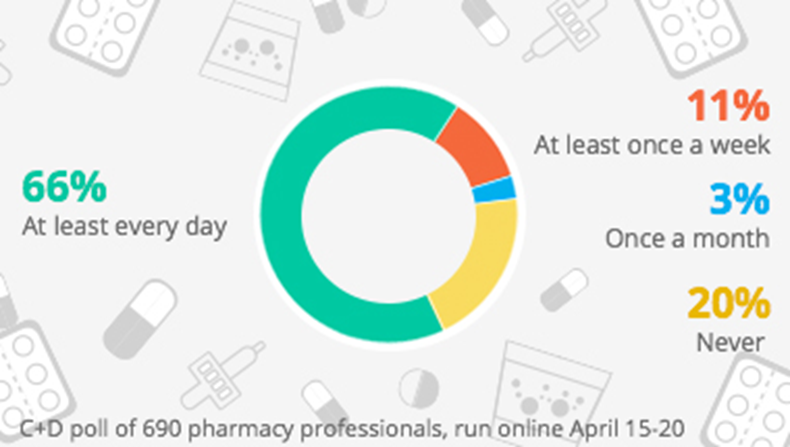 How often do you feel pressured to provide an MUR, regardless of whether it will benefit the patient?

Two in three readers say they feel under pressure to provide a medicines use review at least once a day, according to a poll of C+D readers

Two in three pharmacy staff say they feel under pressure to provide a medicines use review (MURs) at least once a day, according to a poll of C+D readers.

Some 66% of 888 community pharmacy professionals said that they feel pressured by their employer to provide an MUR more than daily, regardless of whether it would benefit the patient. The poll ran online on the C+D website from April 15.

The poll also revealed that 40% of respondents feel pressured more than once a day, with just over 10% reporting it occurs once a week.

However, 20% said they never felt pressured to provide an MUR.

C+D’s poll came after allegations made by the Guardian earlier this month, which suggested managers encourage pharmacists to abuse MURs for financial gain. Boots told C+D at the time it “doesn’t recognise" the newspaper’s claims, and later said it takes pharmacists being put under pressure “very seriously”.

General Pharmaceutical Council (GPhC) inspectors have only criticised one Boots pharmacy in relation to its targets or incentives, the multiple stressed last week (April 24). Boots “took immediate action to address the issues raised” by the GPhC, it added.

Pharmacists who took part in C+D’s Twitter debate discussed the scale of the pressure staff face to meet targets for MURs. Some gave examples of how they are urged to carry out MURs in the workplace – revealing both employee pharmacists and locums are under pressure.

#MURabuse MURs r potentially great service, what I don't like is being badgered via email etc to complete x amount in a week

One supermarket used to pay £1.50 per hour less for shifts if you didn't do MURs #MURabuse

This is the latest in a series of articles exploring the issue of MUR abuse, folllowing on from our Twitter debate. We'll be sharing more exclusive data on the profession's view on MURs, and coverage of the debate, throughout the week.

Work pressures affect MUR quality for one in six readers