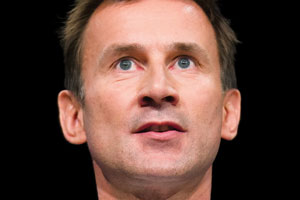 PracticeJeremy Hunt revealed to House of Commons that sector would be allowed access to such information, with proper protections in place – a move welcomed by the RPS and PSNC

Pharmacists will be getting access to patient records, health secretary Jeremy Hunt has announced.

In the first indication that the government plans to involve the pharmacy sector in its plans for sharing electronic health records, Mr Hunt told the House of Commons on Wednesday (October 30) that pharmacist access "could make a very big difference" as long as there were proper protections in place for patients.

It would ensure pharmacists could give people "the correct medicines and know about people's allergies and things like that", he said.

Mr Hunt did not provide any details on when pharmacists would be given access or how the system would work. But his comments came after years of lobbying from pharmacy groups including the NPA and PSNC who have continually argued that access would improve patient safety and save pharmacists' time.

Mr Hunt said he would be "more than happy" to meet him and his local pharmacists and that he was looking forward to the discussion.

The Royal Pharmaceutical Society said it was "delighted" with Mr Hunt's announcement because access to information about patients was key to reducing medicine errors, improving adherence and delivering safe care to patients.

"In the evenings, at weekends and during holiday periods, pharmacists often get requests for medication when patients have run out," said Dave Branford, chair of the RPS English Pharmacy Board.

"Patients themselves do not always have accurate information about their medication and expect the pharmacist to be able to access their personal health records. Allowing such access would facilitate supplies of the right medicines in such circumstances."

"If this can be achieved, PSNC believes community pharmacies will be able to take on a much greater role in patient care, which would benefit patients, enabling them to access more care closer to their homes, as well as easing burdens elsewhere in the NHS," he added.

The government promised in November 2012 that all patients would have access to their own health records online by 2015, which Mr Hunt reaffirmed in January.

A C+D poll carried out in May this year revealed that almost three quarters of 87 respondents believed that patients would be happy for pharmacists to access their records if it improved the care they received.