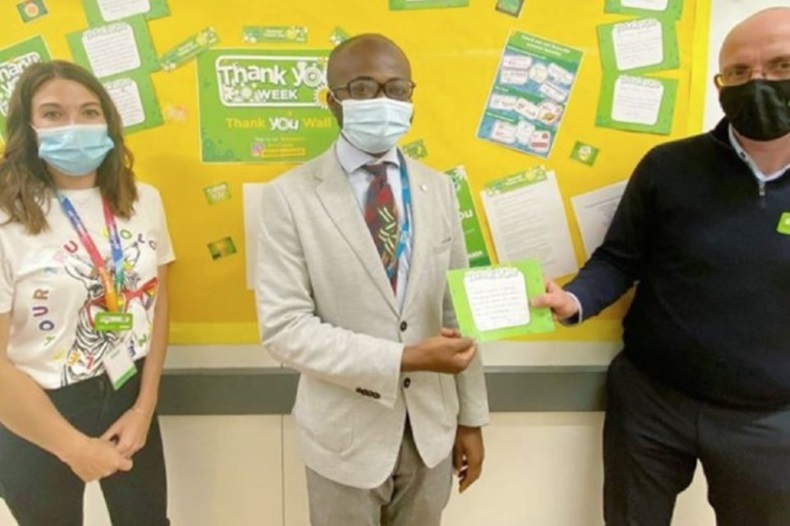 Pharmacist Leo Duah-Gyawu (pictured, centre) acted fast to get his colleague the help she needed

A Gloucester pharmacist has been thanked for his “quick-thinking” and for potentially saving his colleague’s life after he correctly identified her as having a heart attack.

Ms Beard had sought his advice after she felt “pains going down both sides of her neck, arms and round her chest” while at work, Asda said today (July 26).

Mr Duah-Gyawu said he took Ms Beard’s blood pressure “a couple of times…[because] she didn’t look good when she came to see me”. Finding her blood pressure to be “very high”, he insisted on calling for an ambulance, the supermarket explained.

Although a “modest” Mr Duah-Gyawu said he was just doing his job, Ms Beard said his actions could have “saved my life”.

“If I hadn't seen Leo I probably would have just gone home and had a lie down. I don't know what would have happened then – Leo could have possibly saved my life,” she said.

“I was just sat on checkouts when I felt these pains that were really uncomfortable. I really wasn't feeling too good, so I thought I'd better go and see Leo, ” she explained.

Paramedics took Ms Beard to Gloucestershire Royal Hospital, where she was told she had suffered from a heart attack and had a clot at the bottom of the left side her heart, which she is now taking medication for, according to Asda.

Ms Beard is now recovering at home after a two-week stay at Cheltenham General Hospital.

Asda's pharmacy superintendent Faisal Tuddy said: “I'm incredibly proud of the work that our pharmacists do and a situation like this just shows how valuable it is to have access to the right health care advice. Pharmacists are like superheroes – they have so much expertise. ”

Have you or a colleague gone 'above and beyond' in the past 12 months? Enter the C+D Awards today for your chance to win a coveted trophy. Details below

Have you or a colleague gone 'above and beyond' in the past year? Enter the C+D Awards