The owner of Thomas Bell Pharmacy in Cumbria has praised the “outpouring of support” from the community after his pharmacy was vandalised with anti-vax graffiti. 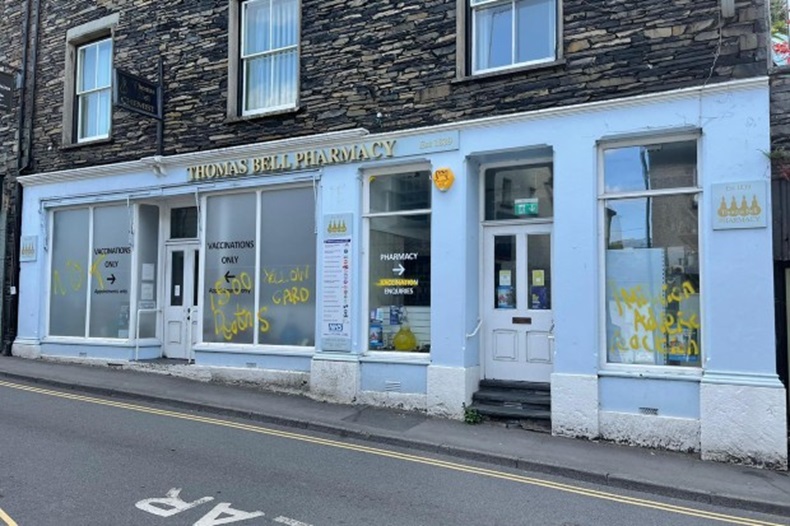 Ravi Voruganti was first alerted to anti-vax statements such as “1,500 deaths” and “1 million adverse reactions” having been graffitied on the front of his pharmacy by a text message and pictures from a customer on Sunday (July 25) morning, he told C+D yesterday (July 26).

“That started the ball rolling with reporting to the police and trying to find out how we remove the graffiti, because we haven't done anything like that before,” Mr Voruganti said.

The pharmacy in Ambleside, Cumbria has been offering COVID-19 vaccinations since the end of March and apart from a couple of people who “wanted to make a scene”, everyone has been very receptive to the husband and wife team offering the service, Mr Voruganti told C+D.

“Although I think in the north west we've done the smallest volume [of vaccinations], we've still punched above our weight in terms of floor space, and the accommodation, etc. But more importantly, I think a lot of people have felt much more comfortable here,” he added.

​Despite the initial “upset” and “feeling really gutted” that the pharmacy had been targeted, Mr Voruganti said the “outpouring of support” from patients, local businesses and the community has been “phenomenal”.

“We've had letters, cards, three or four bunches of flowers dropped off,” he said, even offers of money to help “get it sorted”.

The local window cleaner was “great” in offering to come out to remove the graffiti, but some members of the community beat him to it, Mr Voruganti said.

“People were just disgusted. The customers and community took it more personally than us,” he added.

With Cumbria Police now on the case (see statement below) the Thomas Bell Pharmacy team are looking forward to moving on from the incident.

“We respect people; anti-vaxxers and their opinion. There's got to be [respect] in a democracy and healthy debate is really important,” Mr Voruganti said.

“But it's just not right picking on the little kid in the playground – the small, independent pharmacy. We’re the minnows of the COVID-19 vaccination world with a smaller site in the north west.

“Luckily, the outpouring of support has completely offset [the incident],” he concluded.

In a statement, Cumbria Police said it is investigating the incident of criminal damage and is calling for information.

“The suspect is described as a woman in her late 40s wearing a blue skirt and red top. It is believed she attended the area in a red coloured car.

“Anyone with information relating to this incident can report online at www.cumbria.police.uk/reportit, quoting incident number 89 of 25th July 2021. You can also phone on 101. Alternatively, you can contact Crimestoppers, anonymously, on 0800 555 111.”

Has your pharmacy been affected by crime in the past 12 months?