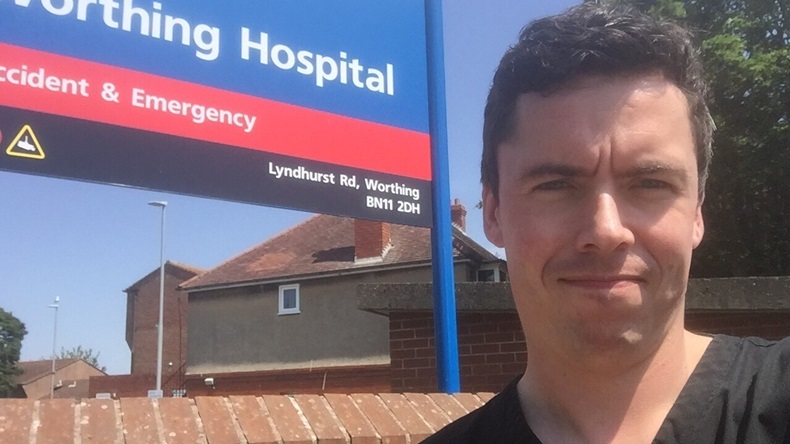 Jamie Richardson: "It's important if you do have a problem that you stop practising and tell someone"

It’s taken Jamie Richardson nearly a decade to practise once again as a hospital pharmacist, after battling drug addiction and being struck off the register. Here he relives his journey in the hope others in a similar situation might seek help sooner

In 2012, Jamie Richardson was a hospital pharmacist with an unfortunate secret.

After being prescribed codeine for a back injury, he became addicted to opiates. When the prescription ran out, he turned to taking medication from his work to counteract the withdrawal. Soon this spiralled, and he was using an illegal supply of heroin.

Let go for gross misconduct and struck off the General Pharmaceutical Council (GPhC) register, the road to recovery has been a long and hard one. However, after years of treatment, in June Mr Richardson was readmitted to the GPhC register and, just this month, he was offered a job as a lead clinical trials pharmacist at the hospital trust that had dismissed him nearly a decade ago.

In a candid interview with C+D, Mr Richardson has told of his ordeal and return to the profession, in the hope that that by telling his story, others in a similar situation will seek help sooner and avoid what he went through.

In November 2012, Mr Richardson was suspended from his role as a mental health pharmacist at University Hospitals Sussex NHS Foundation Trust.

“I took medicines without authorisation – I stole them basically,” he tells C+D. “[In] the year before that I had a worsening opiate addiction. At that point, I'd been using heroin for a while. And I took medicines from work while I was in withdrawal.”

During his suspension, the hospital trust raised a concern with the GPhC. Feeling “increasingly backed into a corner”, Mr Richardson reached out to the Pharmacists’ Defence Association, which put him in contact with the profession’s charity, Pharmacist Support. They agreed to pay for his first stint in rehab at Clouds House in Wiltshire.

“I'm so lucky they did that and I'm very grateful to them,” he says. Unfortunately, after six weeks’ treatment, Mr Richardson relapsed and returned to rehab for a second time in June 2013, this time at the secondary residential rehab facility at Prinsted rehabilitation centre in Surrey.

He left rehab for the second time in August 2013, but by November that year – a year after his suspension – he had relapsed again. By this time, he had admitted to the trust that he had taken the medication and had been officially dismissed.

“They were really kind about it, very understanding,” he tells C+D. “They only treated it as a health problem. And they were just more regretful that I didn't say something earlier, because they could have supported me and helped me.

“That's one thing I've learned: although there is still a stigma, I think with our regulatory body and with the NHS it's very much now viewed as a health problem. And if you come forward and want to take steps to address it, people are prepared to support you and help you through that.”

At this point, Mr Richardson saw being struck off the GPhC register as “a certainty”, and, caught in “active addiction”, continued using heroin to the end of the year.

Without a job, Mr Richardson’s one joy was the birth of his daughter in 2013, who he has been able to spend a lot of time with over the past eight years, he says.

“Everything just felt like it was falling apart,” he explains. “I knew I had a very bad problem at that stage.”

The blinkers of addiction

As a medical professional, a charge could be made that one should know better when it comes to substance misuse. However, Mr Richardson comments that “when you are in active addiction, your level of denial is profound”.

“Had I objectively been looking at someone else behaving that way and taking that quantity, I'd be like: ‘you've got a really bad problem’. But when it's you, you don't see it as clearly.”

While Mr Richardson was in rehab, he says he received treatment alongside another pharmacist suffering from alcoholism and a doctor who had a cocaine problem.

After his second relapse, Mr Richardson still wanted to get clean and so he approached his local Substance Misuse Service team and asked to be put on opiate replacement therapy.

The methadone script helped him begin to reduce the amount of heroin he was using, and, at the start of 2016, he stopped using illegal drugs altogether. The methadone was then tapered and last year he stopped taking opiate replacement.

Although he had recovered from his addiction, Mr Richardson still had a mountain to climb getting back into work. Though his attempts to become a chemistry teacher were unsuccessful, during the application process he asked Helena Bird, a former colleague, for a reference.

“I got back in contact with Helena, and she offered to let me come back on a voluntary basis, which was I'm so grateful for,” Mr Richardson explains. “I’d say Helena has done more for me than anyone with [regards to] getting back onto the register – she’s been amazing.”

He returned as an unpaid pharmacy assistant in the hope that this would give him the experience he needed to prove to the GPhC fitness-to-practise committee that he was ready to return to pharmacy.

“Some of the staff that I had worked directly with in the mental health hospital where the incidents took place had actually come back to the trust to work,” he says. “I didn't realise at the time that they had to give statements to the trust and the GPhC. So, I was completely open.

“I think they worried that […] because they had to give a statement that I disliked them. That wasn't the case at all. I was extremely apologetic for what they had to go through.”

Asked if he had experienced a stigma from colleagues when he returned, Mr Richardson is emphatic: “None whatsoever. Everyone has been absolutely amazing here.”

The next step for Mr Richardson came when the COVID-19 pandemic hit, when his hospital was short-staffed, and they brought him on as a pharmacy assistant in a paid capacity.

In the meantime, he had been building a portfolio to submit to the GPhC – a submission that forms part of a person’s application to be readmitted to the register.

“Being in the hospitals was a brilliant opportunity to [gain] pieces of learning, and how things have changed while I've been out of the profession.”

In December 2020, Mr Richardson submitted his portfolio to the GPhC and a fitness-to-practise hearing was scheduled for May this year.

“The fact that I could come back to the trust that dismissed me […] counted a lot towards my application,” Mr Richardson notes.

The fitness-to-practise hearing was “very daunting”. Held over Zoom, Mr Richardson says being able to see the committee’s body language would have made the experience better, but having the distance actually made things easier.

“A lot of it's a blur now because I was very nervous at the time,” he tells C+D, adding that the committee was “very accommodating”.

Conditional to his readmission to the register is that he complete hair strand testing over the next 18 months, and Mr Richardson has agreed not to use opiates of any form, including over-the-counter products. The GPhC will continue to receive reports from his workplace supervisor and his GP, with whom he meets regularly, he explains.

“They've been extremely fair,” he comments. “It still allows me to get on with my career, but [it also] allows them to reassure themselves that I'm staying on the right track.”

Mr Richardson returned to the register in June and, the day before he spoke to C+D last month (July 6), was offered a lead pharmacist role at the hospital trust.

“I feel so lucky,” he says. “I'm really fortunate that people have given me a chance and taken a risk.”

The importance of coming forward

Asked if his experience of addiction had changed his views about dispensing addictive medicines, Mr Richardson comments: “There are things available over the counter that are probably not entirely appropriate. You can still buy co-dydramol and co-codamol, although they're weaker. It's still somewhat of a gateway in essence.

“It's heightened my awareness of how long we give people things for [or] whether we need to give them opiates – even weak ones – in the first place.”

Mr Richardson’s road to recovery has taken the best part of a decade, but he hopes others in a similar position will come forward sooner.

“It's really important if you do have a problem that you stop practising and tell someone,” he says. “It's no longer viewed as a moral shortcoming or a disciplinary matter. Nowadays, it's viewed more as a health problem, and there is a way to carry on with your career.”