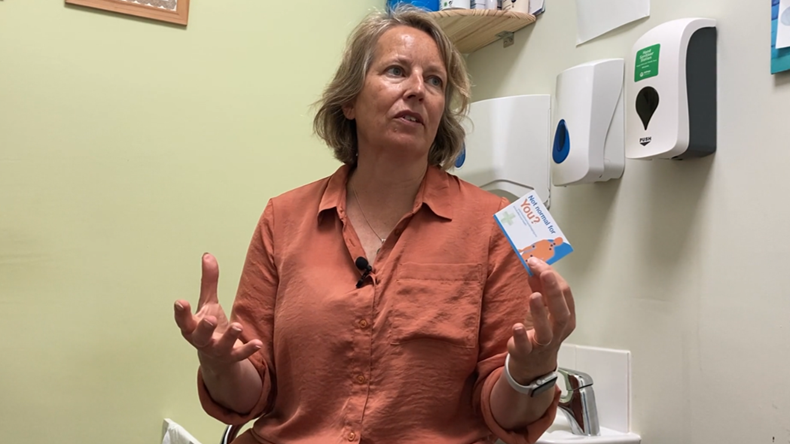 Pharmacist Jackie Lewis, who pioneered the training programme, showcasing the Not Normal For You? symptom card.

As part of the “Not Normal For You?” pilot programme – which ran from January to October 2019 and was funded by the NPA and its charitable arm, the Health Education Foundation – pharmacy staff across 10 pharmacies were trained to spot “red flag” cancer symptoms in walk-in patients.

Staff would write those symptoms, if any were spotted, down on a dedicated, branded card, and persuade the patient to book an appointment to see a GP.

The programme was pioneered by Exmouth-based pharmacist Jackie Lewis, who won community pharmacist of the year award at the C+D Awards 2020 for her work. Ms Lewis told C+D that the programme has been left “unpatented”, so anyone can “pick it up”, although she could not continue it beyond the initial pilot.

“We’ve made it so simple, [we are] really looking for people to take it on,” Ms Lewis said.

“I’d like someone to say, ‘Let’s do it, let’s roll it out [nationally]’,” she added. Asked who she would like to take up the charge, Ms Lewis pointed to the Pharmaceutical Services Negotiating Committee (PSNC) and Health Education England (HEE).

C+D asked PSNC if it would support “Not Normal For You?” being rolled out nationally.

A spokesperson said: “Specific training and development to support pharmacy teams to spot red-flag cancer symptoms may usefully augment the training all pharmacy staff that provide health advice to patients have to undertake.

“That would assist them in providing the support for self-care and signposting essential services.”

A spokesperson for HEE explained that the organisation’s remit pertained specifically to students and directed C+D to NHS England and NHS Improvement (NHSE&I), who had not responded to a request for comment by the time this article was published.

NPA: Programme in line with vision to unleash role of pharmacies

A spokesperson for the NPA told C+D that the programme “would be in line with the vision” the body had set out in its How We Can Help plan to unleash the potential of community pharmacy.

Health Education Foundation chair Dr Ian Cubbin added that the organisation was “delighted to have sponsored this pilot programme, which shows how pharmacies are an integral part of the wider health service.

“When speaking to stakeholders, we cite this as an example of what community pharmacy can offer to patients.”

Pharmacists need to be equipped to step up cancer care