Pharmacist Sukhy Somal and her team go the extra mile – sometimes literally – to ensure patients are not left without medicines. She tells C+D what makes her an award-winning manager 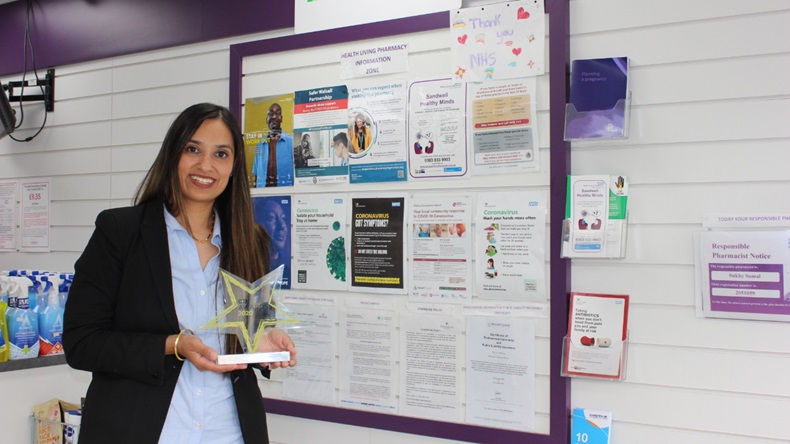 Leadership is a skill that can be learned, or so many leadership coaches preach on LinkedIn. But there are people like Sukhy Somal – pharmacist, manager and co-owner of PharmaCare Pharmacy in Walsall, West Midlands – who seem to have a natural affinity for it.

She comes across as a bubbly person when she greets me in her pharmacy on a June morning. In a matter of seconds, she firmly but gently guides her team outside of the premises for a group photo. 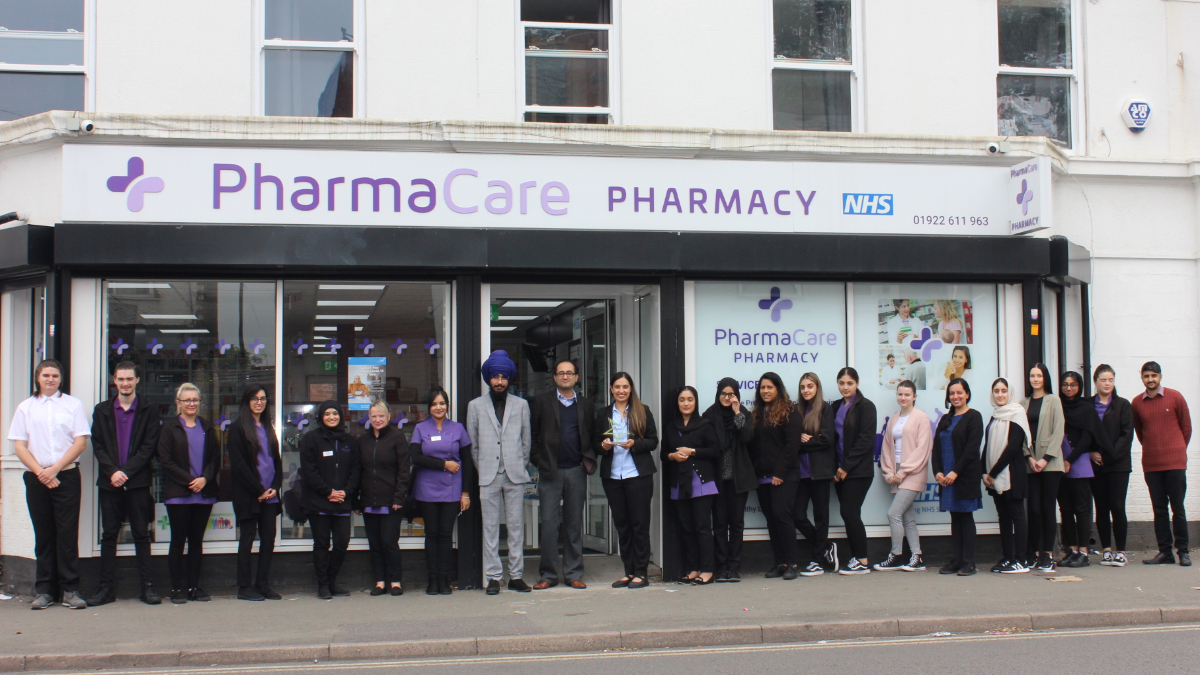 On being crowned Manager of the Year at the C+D Awards 2020, she tells C+D that she feels it is the team who won the award for her. “The credit goes to them, I would have not won without them,” she says modestly.

However, her extensive managerial experience, her passion for and commitment to the job make her an obvious winner of the C+D award.

Ms Somal has extensive experience in managing pharmacy teams. Having qualified as a pharmacist in 2000, she started at Boots, where she landed her first manager position.

She later moved to Lloydspharmacy, where she became “one of the youngest area managers at that time” and oversaw 24 pharmacies for seven years. After a Lloydspharmacy restructure, she became professional development manager at the Midcounties Co-operative group, a position she made her own over another seven-year stint.

That is when her interest for the care home world sparked, as she was working to source care homes to be served by the group’s branches. “I just learned so much. I did a few volunteer days, just working in care homes, understanding what they do... it's a different world, but I really enjoyed it. I felt like I could give back, and I would get [a sense of] fulfilment as I was making a difference,” Ms Somal says.

"The credit goes to the team. I would not have won [the C+D Award] without them."

In 2014, “when the kids were a bit older”, she made the leap into pharmacy ownership and opened her pharmacy with her husband, Ranj. He conveniently takes care of the administrative side of the business, leaving Ms Somal free to manage it, she says.

The PharmaCare Pharmacy team receives a training session every morning. “Communication is absolutely key but there is sometimes an assumption that everybody knows what they are doing, and everybody knows what’s going on. [But] people get frustrated with each other when they don't know what's going on,” she says.

One day, she decided to gather her team in the morning to talk about anything they might want to share, and she has since used those daily meetings to ensure the team learns something new every day. 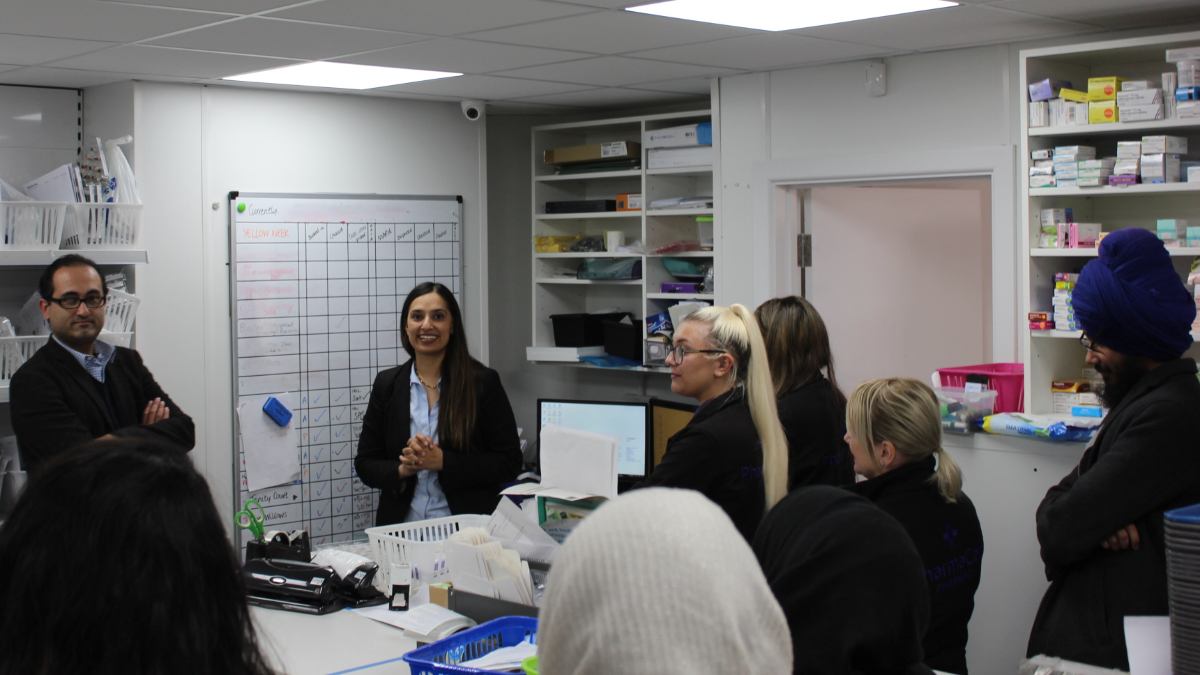 “But it's not just me talking to the team; they contribute too,” Ms Somal says. “Sometimes they will write the agenda, or they will say: ‘we want to cover this’. And then it feels like it’s their meeting, not mine”.

The daily meetings continued even during the pandemic, when they evolved into a safe space where employees could share how they were feeling. "I absolutely love pharmacy and giving back," she says.

“We all had our moments. When you do someone’s medication over a long time, they become an extension of your own family and when suddenly you lose people through COVID-19, it just hits you,” Ms Somal says.

“We all knew people affected by COVID-19 and we would just share our thoughts and understand that we were helping people during this difficult time,” she adds.

Ms Somal also ensured no one felt pressured to go to work if they needed to self-isolate, as some would feel as if “they were going to let them team down” by not showing up to work.

“It was right [to make] it really clear,” Ms Somal says. The collective efforts invested in making the premises COVID-19 safe also meant that the pharmacy never had “staff outbreaks”, she says.

Never leaving patients without their medicines

Ms Somal didn’t used to have an interest in care homes, she tells C+D. “But when you spend time in care homes, you realise how much they do, how important the medication side is and getting it right – that just sparked my interest,” she adds.

“If anybody ever asked me why I did pharmacy, this is the kind of thing I did pharmacy for, where I go home, and I think, ‘Okay, I made a difference today.’"

She loves her job and always goes the extra mile – sometimes literally as she assists patients outside Walsall, too – to ensure customers get the medicine they need, especially when they have palliative care needs.

Her pharmacy is on a palliative care rota, which means Ms Somal is sometimes on call outside normal opening hours to provide palliative care medicines to Walsall residents.

The service is commissioned by the Walsall clinical commissioning group (CCG) and is therefore remunerated when provided to patients within the CCG’s boundaries. “But we cover the whole of the West Midlands, so if the patient is out of Walsall, then we still do it free of charge,” Ms Somal says.

Earlier this year, she received a call for end-of-life medication at midnight. “I came to the pharmacy, met the nurse at the agreed time and dispensed the medication. I always know who's coming to meet me, what time – it's all secure. But it just means that that patient, whether in a care home or in their own home, doesn't suffer, that they're not in pain, they've got the medication they need to be comfortable,” she says.

“If anybody ever asked me why I did pharmacy, this is the kind of thing I did pharmacy for, where I go home, and I think, ‘okay, I made a difference today’,” she adds.

Ms Somal also proactively responds to medicine shortages. When a medicine is out of stock, her team gets in touch with the local doctors with a list of available asubstitutions when asking for an alternative prescription, she explains.

“I would say over 90% of the time, we get a prescription for what we've suggested, which doesn't leave the customer without medication.

“I don't expect customers to go from one pharmacy, to another pharmacy, and to the next to be told the same thing. That's not good customer service. We need to go out of our way and put the customer first. These are little things that [have] helped to grow our business.” 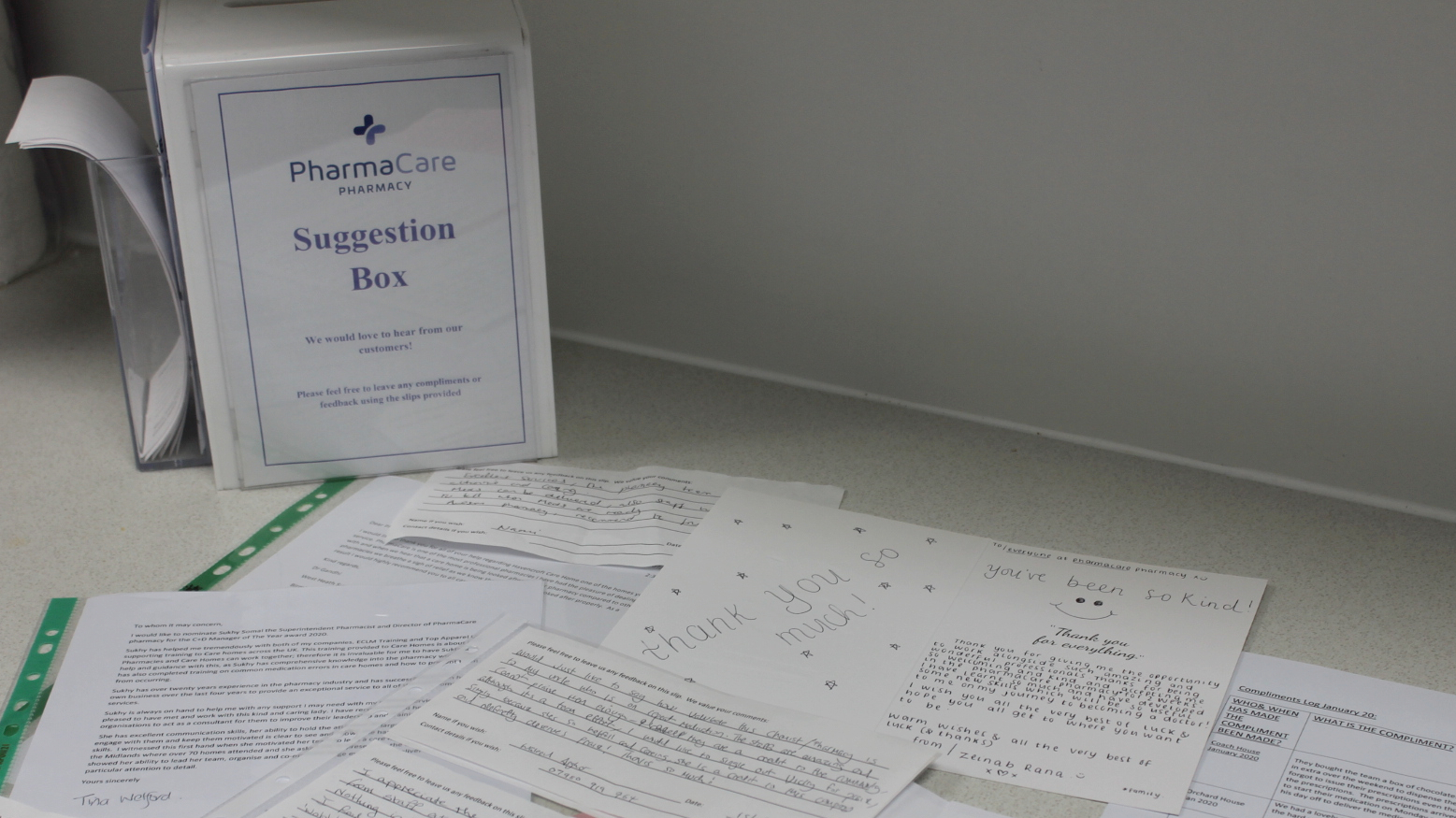 Giving back to the community at large

Ms Somal certainly puts the ‘community’ into community pharmacy, looking after patients’ health even outside of the pharmacy.

She led on a few “offsite” events, which saw her team spend a weekend at a Gurdwara doing health checks. In another event, she worked alongside Macmillan nurses to raise cancer awareness.

These events raise “the profile of health care professionals in partnership with doctors as well and various health groups”, Ms Somal says. 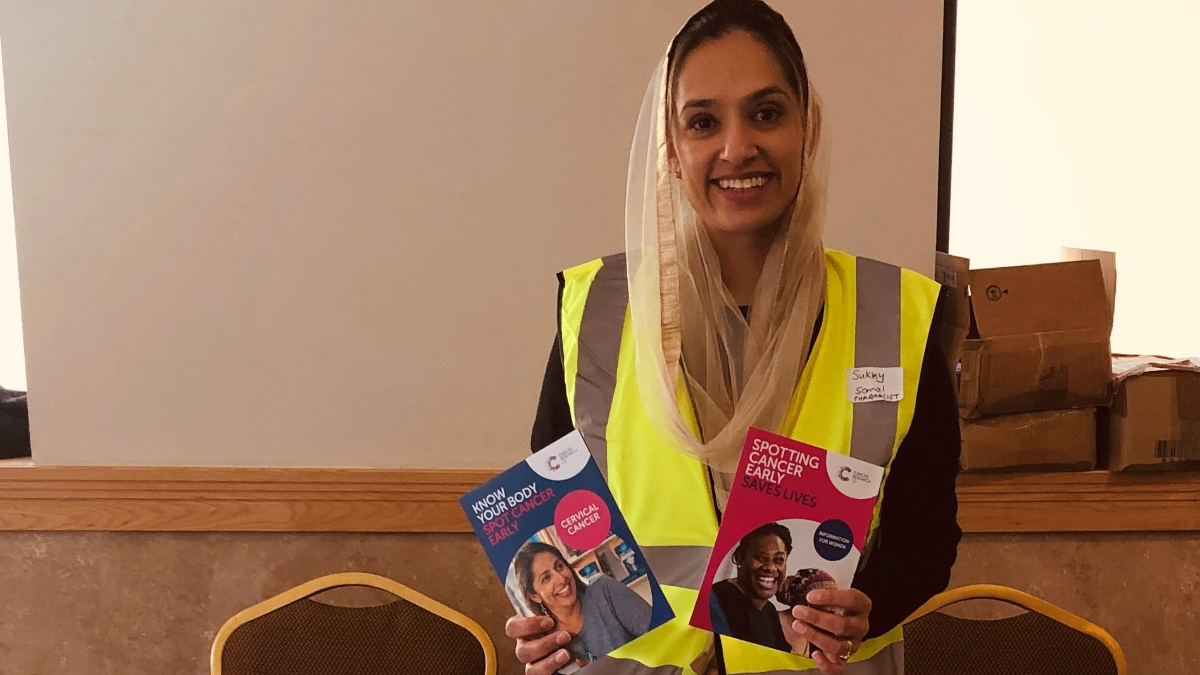 Ms Somal wears many hats, but she doesn’t see her job as merely work. “It's just what I do. I think when you think of it like that, you want to do more,” she says.

With many plans and projects in her leadership, this pharmacy manager is truly committed to improving the sector for the benefit of all.

As the primary care network (PCN) pharmacy lead for all PCNs in Walsall, she is committed to raising community pharmacy’s profile within the healthcare system. “I wish pharmacy had a stronger voice and we looked after each other as a whole. What is good for [one] pharmacy is good for all of us,” she says. 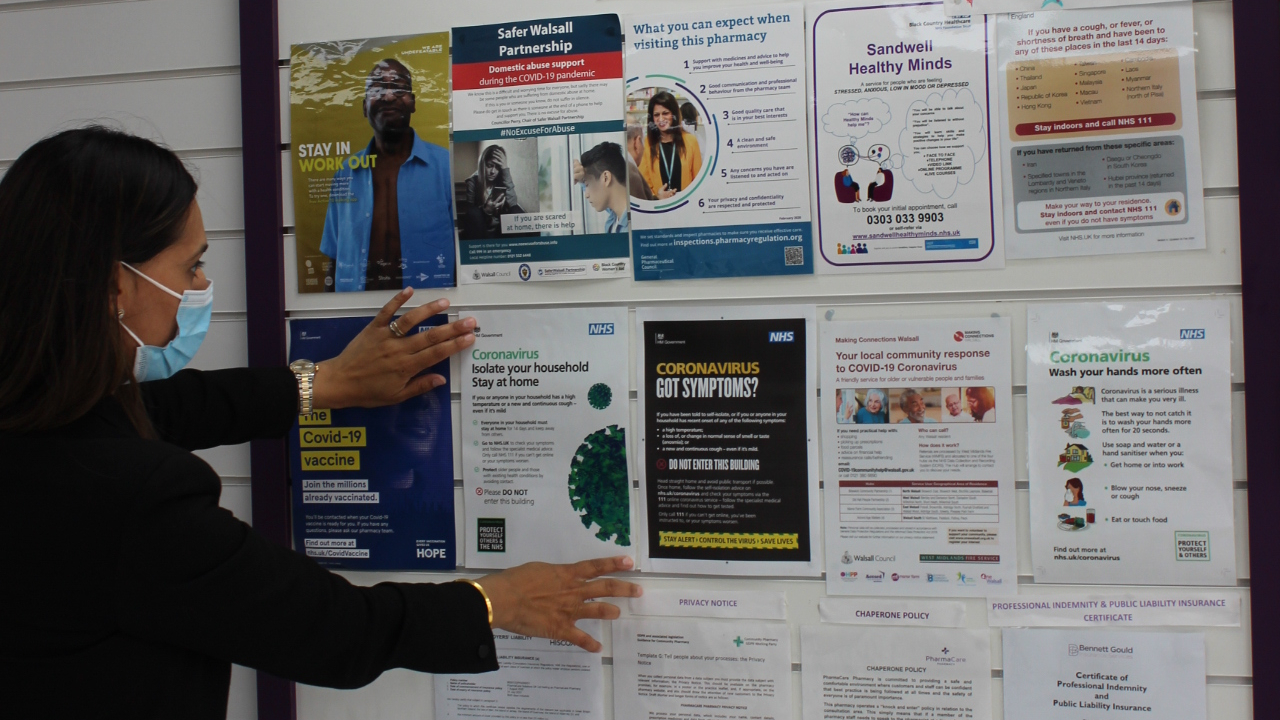 What makes a COVID Hero? An award-winning pharmacist shares her wisdom