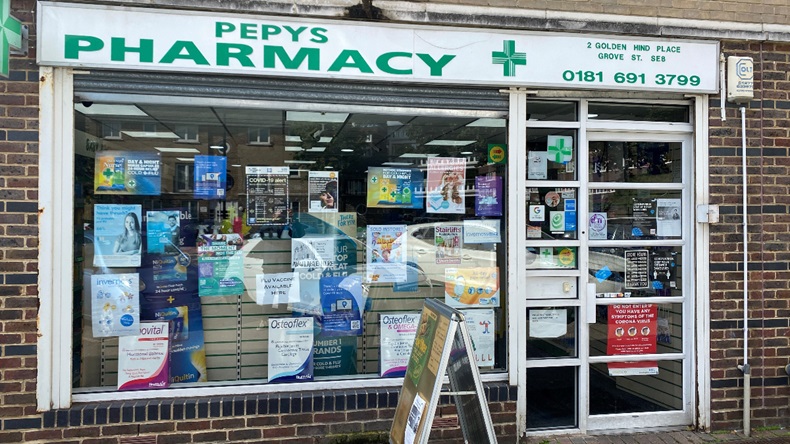 Pharmacist Toseef Akhter: "Everyone was shaken. It was harrowing to see"

A Deptford pharmacist has praised his pharmacy technician’s “heroic act”, after a patient reportedly attempted to self-harm inside the pharmacy.

After his request was refused (see more below), the patient reportedly “spilled an unknown substance on themselves” while inside the pharmacy, according to a report logged with the London Fire Brigade.

With the suspicion that the liquid substance could have been petrol, a fire engine from Greenwich Fire Station was sent to the premises, a London Fire Brigade spokesperson explained to C+D.

Police were also called to reports of a man “attempting to self-harm” at the pharmacy in Golden Hind Place, a Metropolitan police spokesperson confirmed to C+D last week (September 24).

“Officers and the London Ambulance Service attended, and the man was taken to hospital as a precaution; he was left in the care of medical professionals,” the spokesperson added.

Explaining the lead up to the event, Mr Akhter said the patient was “very agitated coming in”. The man first visited the pharmacy in the morning before returning in the afternoon, according to the superintendent pharmacist.

“The last dose he collected was on September 8. As he had missed his dose on September 10, it was not possible to supply his [new] request. But when he was told this, he said that someone had told him to come in on Monday, which no one would have done,” Mr Akhter claimed.

After Mr Akhter advised the man to call the health and social care charity Change, Grow, Live (CGL), the patient left the dispensary but returned later that afternoon. Mr Akhter claimed the patient was “visibly distressed” and confirmed he had not yet rung CGL.

But while on the phone with CGL himself, Mr Akhter told C+D he noticed the man proceed to take a spray bottle out from a white carrier bag and spray the hood of his jacket. He then took the spray top off the bottle and poured the remaining content over his head, leading some to spill onto the carpet and seat, Mr Akhter claimed.

When the patient allegedly reached towards his pocket, Mr Kargbo “ran over” to restrain the patient.

“We called the emergency services straight away. The police responded very quickly. My colleague stayed with the gentleman and essentially held his wrists to ensure that he could not reach for his pocket,” Mr Akhter said.

He added: “Everyone was shaken. It was harrowing to see. It’s not something you come to work to [deal with].”

Mr Akhter said he has since seen the patient who has apologised.

“I understand that there are drug issues and there are potential mental health issues as well,” the superintendent pharmacist said.

“I just wanted to highlight the dangers we face in the pharmacy and the heroic act by one of my staff.”

Earlier this month, the Company Chemists’ Association, the Association of Independent Multiple pharmacies and the National Pharmacy Association told C+D they are taking measures to ensure greater protection for pharmacists and pharmacy staff facing increased levels of violence at work.

Have you experienced a crime in your pharmacy in the past 12 months?