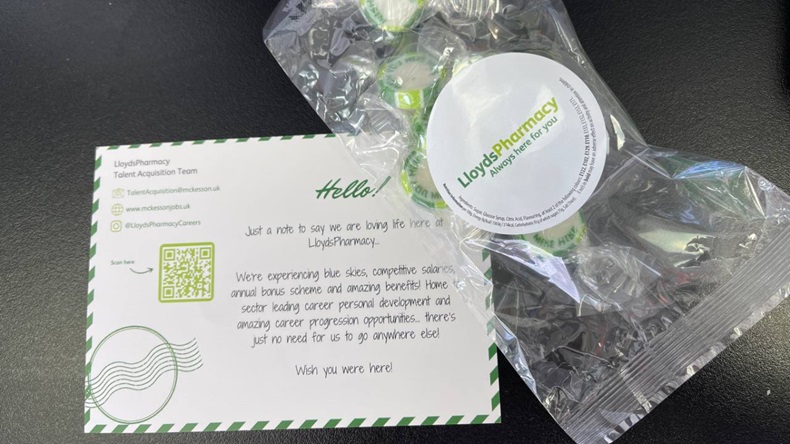 Lloydspharmacy: “The recruitment of pharmacists is highly competitive”

Lloydspharmacy has sent sweets and a card to pharmacists currently working for competitors in a bid to attract new employees.

On the card, which was shared on Twitter today (September 30), the Lloydspharmacy Talent Acquisition Team wrote: “Just a note to say we are loving life here at Lloydspharmacy.

“Wish you were here!”

A Lloydspharmacy spokesperson confirmed to C+D today that the cards were addressed to pharmacists and were sent to publicly available pharmacy addresses.

According to the Twitter post, the card and sweets were sent to pharmacies including branches of Well Pharmacy and Rowlands.

Pharmacists are in high demand due to a rise in vacancies and the increasing demand for primary care network pharmacists, the spokesperson said.

“The recruitment of pharmacists is highly competitive,” they added.

“Employers, like us, are adopting a number of different approaches to attract new employees, including directly contacting the best talent in the market where appropriate,” the spokesperson.

“While our own pharmacists have also been approached directly by other employers, we believe that Lloydspharmacy is a great place to work, with competitive salaries and leading career development pathways,” the spokesperson concluded.

Two months ago, the multiple shared a post on LinkedIn in which it said it was offering a £6,000 relocation bonus “for a number of our qualified pharmacist vacancies”.

Sky News reported in July that McKesson – Lloydspharmacy’s parent company – was reportedly in talks with three prospective bidders, Aurelius Group, Epiris and HIG Europe, for the sale of its UK business.

McKesson told C+D at the time that it would not comment on press speculation.

Rowlands: “We recruit on the basis of talent”

Commenting on Lloydspharmacy’s latest headhunting approach, a spokesperson for Rowlands told C+D today: “We recruit on the basis of talent, not a sweet tooth. Our colleagues are healthcare professionals who have exciting career opportunities at Rowlands.”

In June, the Community Pharmacy Workforce Development Group (CPWDG) published a report that exposed a full-time equivalent pharmacist vacancy rate of 9% across England based on the findings of a survey it had carried out in July 2020.

PDA: “Employers are failing to secure the hours they need”

“Nevertheless, this mailing has raised the debate about the attractiveness of employment for community pharmacists.

“Despite record numbers on the register, some employers are failing to secure the hours they need from pharmacists, not just because the pharmacists are portfolio working, or switching to alternative roles within pharmacy practice, but increasingly because some are choosing to work outside of pharmacy for some or all of their time rather than accept the conditions on offer,” he added.

“No amount of ‘funky’ recruitment marketing is going to address the genuine concerns many pharmacists have about the employment offer available at many businesses,” Mr Day said.

He said that the PDA is in pay talks with Boots and is due to commence talks with Lloydspharmacy on the same topic this winter.

“In both cases, [we] will be seeking pay systems based on principles of fairness, equality, transparency, respect and recognition as well as working for wider improvements to conditions,” Mr Day added.

Lloydspharmacy: We only adopt ‘part-closure policy’ where pharmacist cannot be secured