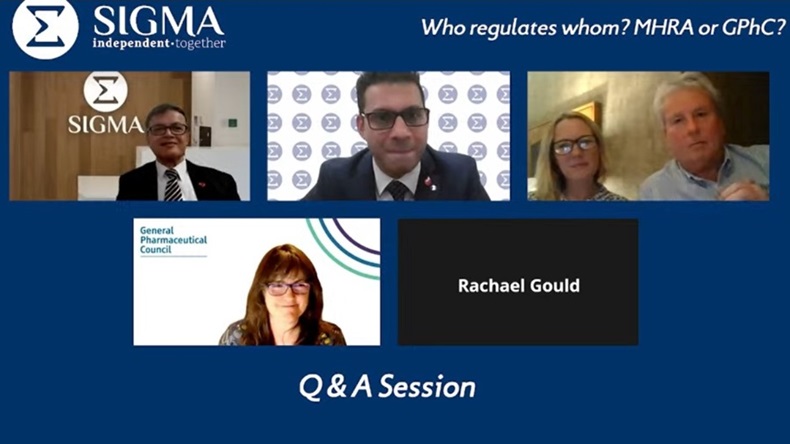 Claire Bryce-Smith: “We are continuing to work with wholesalers on intelligence led work”

Responding to a question from C+D about how the regulator is continuing to investigate some pharmacies’ supply of codeine-containing products, Claire Bryce-Smith said that the GPhC is “continuing to work with wholesalers” to carry out intelligence-led work identifying pharmacies that have been purchasing large quantities of codeine linctus.

Ms Bryce-Smith, who is the GPhC's director of insight, intelligence and inspection, warned that “just taking enforcement action is not enough” at a Sigma Pharmaceuticals webinar last Wednesday (November 10).

The GPhC is working “closely” with the Medicines and Healthcare products Regulatory Agency to seek information from wholesalers about pharmacies’ codeine linctus buying habits, she said.

It follows several months of work by the regulator to curb the "high purchase numbers of codeine linctus" from some pharmacies – including telling 10 online pharmacies to stop supplying the drug.

In July, the GPhC announced it had taken enforcement action against 36 pharmacies and a pharmacy professional over the past year, following investigations into their “unusually high sales of codeine linctus”.

Ms Bryce-Smith revealed on the night of the webinar that the GPhC had been forced to take further enforcement action against a pharmacy earlier that day, following concerns over its supply of codeine linctus.

The enforcement notice served to the pharmacy, seen by C+D, specifies that it had been “buying unusually large quantities of codeine linctus”.

Codeine linctus – a pharmacy (P) medicine – “is known to be liable to misuse and addiction without adequate safeguards and monitoring”, according to the regulator.

Increase in information shared with LPCs

Ms Bryce-Smith pointed out that the GPhC is sharing what it learns from its investigations into the sale of codeine linctus with local pharmaceutical committees.

“We've also been very much targeting certain areas of the country, or where we've actually been finding these issues, as well,” she told delegates.

However, a GPhC spokesperson told C+D that the regulator has “not identified any patterns that suggest the issue is geographically specific”.

They added: “The inspectors have given presentations about the emerging issues we’ve identified about supply of codeine linctus, the enforcement action we’ve taken, and the insights we have gained from inspections, to help raise awareness of this issue among pharmacy owners, contractors and pharmacy professionals.”

Regulators must invest “in educating the public”

When asked about the regulation of online pharmacies last Wednesday, Ms Bryce-Smith said: “We have recognised that perhaps, with all of these changes to online service delivery, there hasn't really been the same amount of investment by anybody in educating the public.”

While the GPhC has a list of “top tips for patients” on its website to help the public “make more informed choices” when accessing medicines online, “we have also ourselves recognised that that's not enough,” Ms Bryce-Smith added.

She continued: “We've started to reach out to some charities, and we've been doing presentations for charities, particularly those supporting people who may be abusing medicines or misusing medicines and vulnerable.

“We're coming across, unfortunately, a lot of occasions where vulnerable people are managing to access medicines that they perhaps shouldn’t be. [There is] more work to be done, I would say.”

In April, the GPhC told C+D that fitness-to-practice cases were “ongoing” following the death by “excess consumption of codeine” of former practice nurse, Katie Emma Corrigan.

A coroner’s report determined that she had continued to source codeine-based products, antidepressants and beta-blockers from “a number of” online pharmacies, after her GP had decided to stop prescribing her codeine or other opiates in April 2018.

In a poll conducted by C+D earlier this year, pharmacy professionals voted overwhelmingly in support of the reclassification of codeine linctus from P to a prescription-only medicine.