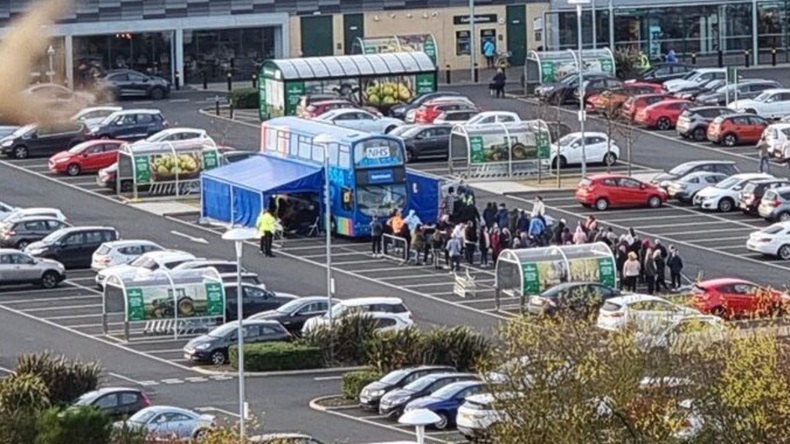 A team of pharmacists working at Knights Pharmacy have administered more than 1,000 COVID-19 jabs in their first four bus trips across County Durham, the chain's superintendent Pete Horrocks has told C+D.

The bus carrying three Knights pharmacists, including Mr Horrocks, made its first stop in Newton Aycliffe on September 2.

It has since journeyed to three more locations – Stanley, Consett and Dalton Park – throughout November, where the Knights team administered both COVID-19 and flu vaccines.

While stationed in the Morrison’s car park at the Dalton Park retail outlet last week (November 11), pharmacists gave out 482 COVID-19 and 32 flu jabs. This brings the total vaccines the team has administered to 1,097 COVID-19 and 63 flu vaccines respectively.

Kate Huddart, the CCG's head of medicines optimisation, said that the initiative “has been going really well in County Durham”.

“The support we have received from Knights Pharmacy and our other primary care network teams has been invaluable”, she added. “Taking the vaccination bus even closer to where people live enables us to reach many more people who may have found it difficult to get to a clinic so far and ensure that no one is left behind.”

More dates could be scheduled

The CCG sent out its first vaccination bus in May 2021. It later approached Knights Pharmacy to collaborate on the project, Mr Horrocks told C+D last week (November 9).

He believes this is due to a “successful clinic” that the independent chain launched with a local GP practice in January, which “demonstrated collaborative working from the beginning”.

“They [the CCG] hire the bus, we staff it”, Mr Horrocks explained.

The CCG told C+D it had sought Knights’ involvement “to help support the bus by adding additional vaccination capacity and supply to the local vaccination programme”.

Knights Pharmacy is “looking to get some future dates [for the vaccine bus] scheduled over the coming weeks”, Mr Horrocks told C+D.

The independent pharmacy chain has obtained special authorisation to run each offsite event.

Each location is chosen according “data provided by Durham County Council Public Health teams” indicating areas with “a low uptake of the vaccinations”, the CCG said.

In May, Mr Horrocks was personally invited to attend a thank-you reception for NHS staff, hosted by Prime Minister Boris Johnson, in recognition of his efforts in the COVID-19 response.

Are you/your pharmacy involved in the COVID-19 vaccination programme?