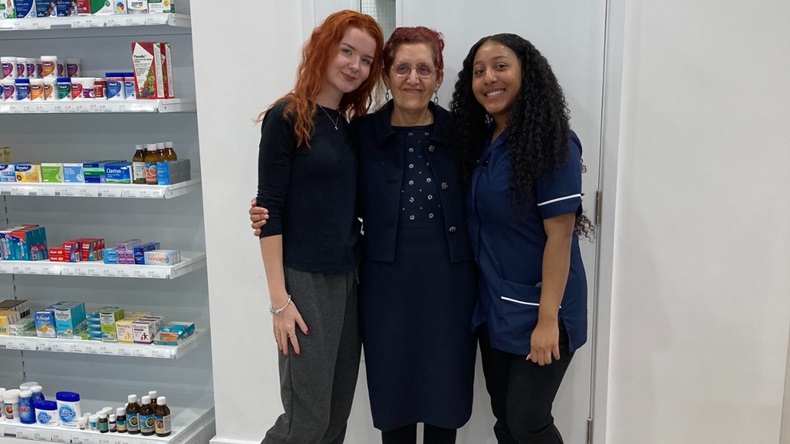 Shenu with her colleagues Lucinda and Shanay in Wheatley Pharmacy, Oxfordshire

Shenu Barclay has had an eventful 45-year career in community pharmacy. She reflects on her highs and lows and tells C+D how she chose to mark the professional milestone

When Shenu Barclay was wondering how to celebrate 45 years of working in community pharmacy, her friends suggested she “throw a big party”. Instead, she wanted to mark this milestone by doing “good deeds”. So, she chose to take part in a series of fundraising activities, all themed on the number 45, to help various causes – from the homeless and hungry to refugees and cancer patients.

Putting the needs of others first is typical of how this Coventry-based locum pharmacist lives life – which is always to the full. During Shenu’s 45 years in pharmacy, she has saved lives, been held at gunpoint, and served medicines to celebrities. She has auditioned for TV programmes Blind Date and What’s My Line?

She’s earned pharmacy accolades and been feted by her professional peers. And all the while, Shenu has been accumulating a wealth of knowledge and skills – enriching a career she loves, but didn’t choose.

“My sisters decided my career”

Born in Eldoret, a small village in Kenya in 1952, Shenu wanted to be a secretary when she grew up. But her family had other plans for her.

“In the Asian culture at that time, one's future career was determined by the elders of the family,” she tells C+D. “My three sisters were teachers – they were used to guiding and mentoring people about their careers – and they decided I should be a pharmacist.”

Shenu admits at that time she “didn't know what being a pharmacist meant”.

“But then I found out more about it, and it sounded a fascinating career to me. So that’s how I came to choose pharmacy.”

In 1972, she chose to study for a degree in pharmacy at Brighton Polytechnic – her home country didn’t offer that option – and she liked the idea of being close to London. Initially, one of her sisters stayed with her “to help me settle in, as I was the baby of the family”, she explains.

“It was difficult at first, being far away from my family, and England was so cold after Kenya. But then I made friends, and eventually I got used to the Western way of life,” she says.

After qualifying as a pharmacist in 1976, Shenu continued to work where she had done her pre-registration training – Boots pharmacy in London’s Piccadilly Circus. “We used to get a lot of famous people visiting the pharmacy, anyone from singer Mick Jagger of the Rolling Stones to Labour politician Tony Benn, and a few Arabian princesses. So, it was a starry sort of start to my career,” she says.

In 1977, she decided to try locuming, wanting to “experience working in different areas of London”. She also tried pharmacy management for three years but decided to return to locum work because she preferred the variety. “No one day is the same, and I enjoy engaging with different communities,” she says. Working in a variety of areas means she sometimes has the opportunity to use her language skills – she speaks three Asian languages, as well as one African language and basic French.

“If a gun is pointed at you, you need to be sensible”

Some areas she has worked in have high levels of crime. During her time locuming in London, she recalls being held at gunpoint while a gang robbed the pharmacy of controlled drugs. “A man in a balaclava was pointing a gun at me, shouting at me to open the cupboard where the drugs were.

"I didn't resist because if a gun is pointed at you, you need to be sensible. After the gang had taken the drugs and left, I called the police. The doctor in the neighbouring surgery offered me tranquilisers, but I said: ‘No, I’ll recover at my own pace’.”

Another traumatic incident – one that forced her to leave her home in the city after living there for 30 years – was the 2005 terror attack on London. “I will never forget that day,” Shenu recalls. “I narrowly missed travelling on the London bus that was bombed outside the headquarters of the British Medical Association. My mother and sister were living in Coventry, so I decided to move there.”

Since then, she has locumed in multiple pharmacies in Coventry and surrounding areas, in rural villages in Oxfordshire, and in Cheltenham and Northamptonshire. She has become particularly fond of her patients, and they of her.

“Once, when there was a lot of heavy snow, I couldn’t get a train to Cheltenham, so I took a taxi to work. All my clients were delighted I had made the effort to do their prescriptions, despite the atrocious weather. And they remember that I’m the lady who comes from Coventry who went that extra mile. They’re a very appreciative community,” she says.

Patient appreciation is one of the many rewards of a career in pharmacy, she says. “It’s also rewarding when I diagnose conditions accurately, signpost to the GP or emergency services and get feedback that the doctor has agreed with my judgement,” says Shenu.

She recalls one customer “insisting that I should give him a bottle of cough mixture for his cough”. Shenu insisted on asking a few more questions, and discovered the patient was also experiencing shortness of breath, as well as being a smoker. “I told him it could be chronic obstructive pulmonary disease, and that he should see a doctor.

“Later, the patient told me his doctor had sent him to hospital to test for lung damage and that I’d saved his life.”

Shenu’s commitment to patient care has been formally recognised through the Feet First pharmacy award, an invite to the NHS anniversary garden party at Buckingham Palace, and by reaching the semi-finals of the ‘I Love my Pharmacist’ competition in 2015.

Her hobby as an avid ‘comper’ – she enters around 45-50 competitions a year – has also brought numerous rewards, a fair few coming from C+D. “From the start of my career, I’ve entered various competitions. I’ve won many prizes over the years, including bottles of champagne, a photo shoot, and an evening in the West End of London hob-nobbing with celebrities.” 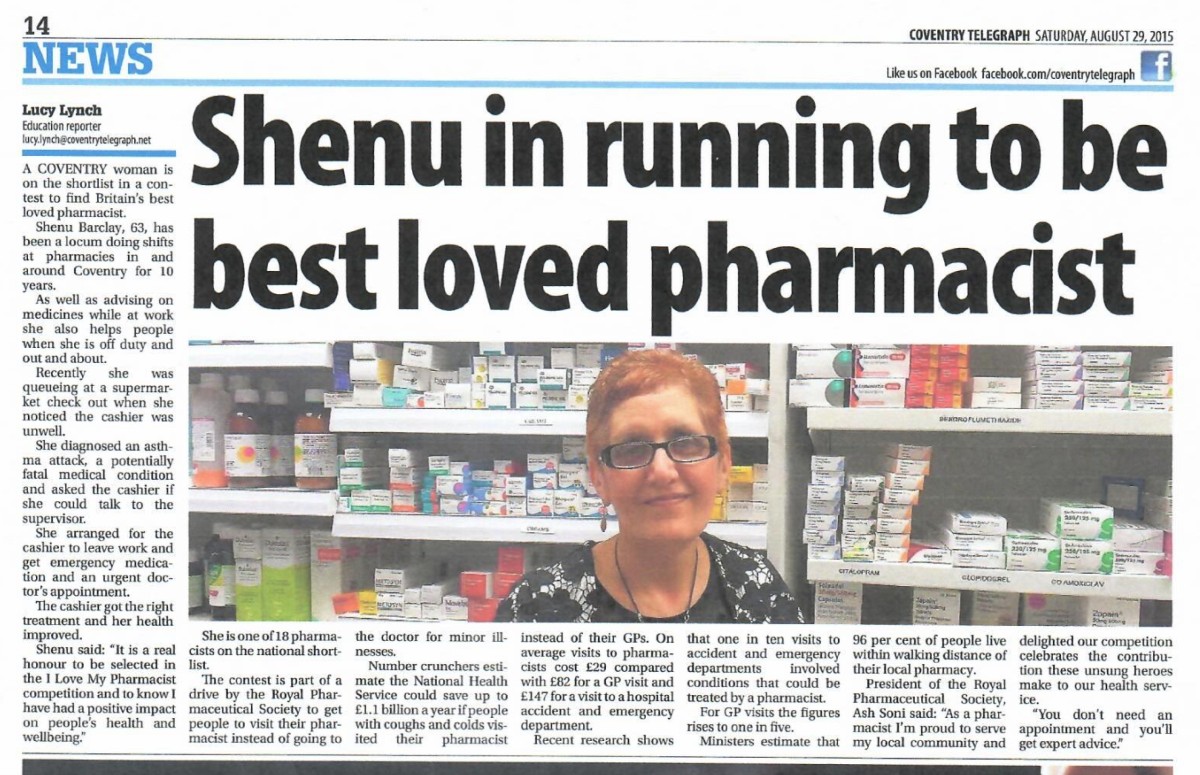 During her 45 years in pharmacy, Shenu has witnessed many changes to pharmacy practice. Digital technology has had a “dramatic” impact on the profession, she believes. “When I started in pharmacy, we were dealing with handwritten prescriptions. Now electronic prescribing is saving time and improving accuracy.”

At the start of her career, she says pharmacy’s focus was “to give medicines to patients and say, ‘Take this now’. But we now have patient-centred care, we work in partnership with the patient, and it’s a shared decision-making process”.

Pharmacists now have a “major role in promoting public health”, she says, such as supporting patients with weight issues or smoking cessation, and she sees the future of pharmacy as focusing on “empowering people to look after their health”.

Shenu envisages that pharmacists will play a “prominent part” in primary care networks. And she predicts they will increasingly offer remote patient consultations by phone or video – an approach that has become more common since the pandemic.

Working during the pandemic has been “extremely difficult”, says Shenu. “Workload has increased dramatically with scripts, and patients, pharmacists and delivery drivers have had to self-isolate.

“This has led to working behind closed doors to catch up with workload, altered trading hours, and the use of agency drivers and voluntary ‘community champions’ to support patients.”

Shenu has found the pandemic challenging on a personal level, having developed long COVID, and is now having to manage the resulting fatigue, “but I accept it as a part of life”, she says.

45 years of helping others

Recognising the hardship of others during the pandemic, she chose her 45th year of pharmacy to give to others rather than celebrating herself. “It seemed cruel to hold a party when people were suffering,” she says.

Helping others is important to Shenu – “I have a social conscience,” she says – and this includes supporting her fellow pharmacists, “who are undergoing a difficult time with pharmacy closures”.

Working in isolation is also an issue for pharmacy, she believes. “We can’t work in silos. We need to work as equal partners with doctors and nurses, rather than competitively.”

The profession also needs to “constantly update our training, because things are changing fast, and when customers want answers, we need to have that knowledge at our fingertips”, she says.

Her advice for the next generation of pharmacists is “don’t be shy” about highlighting any new, successful services. “If you’ve got something to shout about then share it with others. Share it with C+D. Talk about the positives and drawbacks of your work so that others can learn from you.

“Pharmacists need to promote themselves better and showcase what they do. We need to take every opportunity we can to show just how capable we are.”

She also urges pharmacists to make the most of “every opportunity that comes their way”. “If you have the chance to become a prescriber or a pharmacist with a special interest, then go for it, because you’ll regret it if you don’t,” she advises.

After 45 years in pharmacy, Shenu has no regrets. She plans to continue living life to the full. “I want to keep my brain and body active for as long as possible. There will come a time when I’ll retire. But not yet,” she quips.

What's your favourite thing about working in community pharmacy? Share your stories and career highlights on the C+D Community

C+D Awards 2021: Paydens scoops two trophies and your Above and Beyond winner revealed