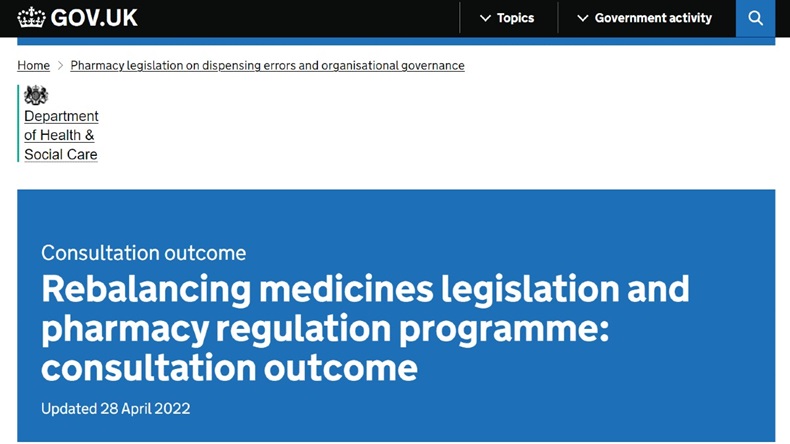 Just 13.3% of respondents agreed with moving the power to regulators

Following parliamentary approval, legislation will be amended to give regulators – rather than ministers – the power to decide when a responsible pharmacist can be in charge of more than one pharmacy, the DH has concluded following a consultation.

A raft of proposals aimed at “clarifying” the role of superintendent and responsible pharmacists was set out by the Department of Health and Social Care (DH) programme board tasked with “rebalancing” medicines legislation and pharmacy regulation in 2018.

Among the proposals, the board suggested “retaining [the] general rule that a pharmacist can only be the responsible pharmacist (RP) for one pharmacy at the same time”. However, it proposed to pass regulators the “power to specify an exception” to this rule.

In its response to the consultation published today (April 28), the DH concluded that it “will amend legislation such that the pharmacy regulators rather than ministers may use an existing power under the Medicines Act 1968 to set out an exception to the general rule that a RP may only be in charge of one pharmacy at a time”.

This is despite just 13.3% of respondents to the consultation agreeing with the proposal.

However, the pharmacy regulators would have to consult on the proposed changes to their powers, “offering the opportunity for scrutiny and comment”, before making any new rules.

“Supervision will be the subject of further consideration”

Those who disagreed with the proposal “repeatedly” cited concerns about remote supervision and fears over patient safety, the DH noted.

However, it stressed that: “The current legislation and RP regulations already enable the RP to be absent from the pharmacy, albeit for a limited period. The consultation did not raise proposals in relation to remote supervision.”

Supervision will be subject to further discussion under the cross-sector supervision practice group, it added.

“Nothing within this draft order would impact upon the requirement for there to be a pharmacist, or someone working under their supervision, to carry out the sale or supply of a medicine not subject to general sale in a registered pharmacy – as outlined in regulation 220 of the Human Medicines Regulations 2012,” the DH stressed.

Critics of the proposal said that provisions allowing RPs to supervise more than one pharmacy “should be removed entirely”, as “there is no situation where it would be necessary for the exception to the general rule to be made”.

RPs may not be able to properly fulfil their duties if they were to take on the role for more than one pharmacy at a time – especially at premises where they were not physically present – they suggested.

Should the exemption be approved, critics said it “should be made clear that [it] would apply in only certain exceptional circumstances” and “would not occur regularly”.

Some respondents also suggested that the GPhC and PSNI consult further on these powers, should they be made a reality.

Refresher: The role of the responsible pharmacist

Pharmacies can supply meds without responsible pharmacist in emergency