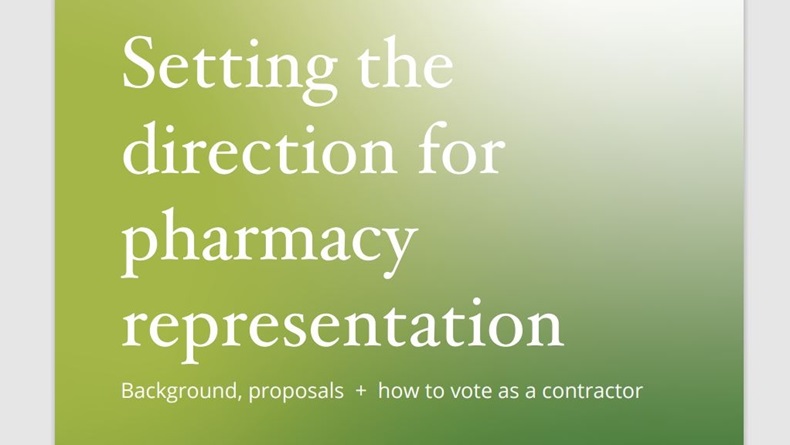 As voting on the Review Steering Group’s (RSG) proposals to overhaul pharmacy representation in England gets underway, C+D speaks to RSG members about the most important recommendations. So, what could change look like?

The report, published last month, set out 37 proposals to address how the Pharmaceutical Services Negotiating Committee (PSNC) and local pharmaceutical committees (LPCs) should best respond to the recommendations outlined in the Wright Review, an independent report that advocated a dramatic overhaul of community pharmacy contractor representation in 2020.

Among the raft of proposals – a result of 15 months of discussion – sit four key themes: ensuring stronger governance within PSNC; better alignment with the NHS; appropriate resourcing; and stronger collaboration.

“They have consensus across the community pharmacy sector,” the report says. “A ‘yes’ vote, will set a clear mandate for change.”

Voting on the proposals opens today (May 27) and will remain open for a further three weeks until June 17, during which contractors can cast their vote, one vote per contract held.

C+D spoke to RSG members Stephen Thomas, superintendent pharmacist at Rowlands Pharmacy, and Mark Burdon, an independent contractor in Newcastle and director of the Burdon Pharmacy Group, to shed light on the review’s most significant proposals, the reaction to them, and how they believe the recommendations can shape how the sector is seen.

Here’s everything you need to know ahead of the vote.

Key to the recommendations outlined, lies a central proposal – adjusting how the contractor levy is split between LPCs and PSNC.

LPCs should redistribute 13% of its funding towards the national negotiating body, the report suggests, to ensure PSNC is "appropriately resourced". This proposal to “rebalance” local and national funding by £750,000 per year is in line with the “lower estimate” recommended by the Wright Review.

“PSNC is preparing for negotiations about what happens after the current five-year Community Pharmacy Contractual Framework (CPCF) deal ends,” the report adds. “Protection of this core funding is increasingly difficult as public finances tighten, but it is critical to the future success and development of community pharmacies.”

Sufficient resources for PSNC will “improve the output from [PSNC’s] negotiations”, Mr Thomas tells C+D. “Part of that is the input that you put into it.”

“It’s still going to have to be a very efficient organisation to enable that to happen, even with the percentage increase the proposals are recommending.”

Mr Burdon agrees. Annually, “PSNC receives a little less than £3.5 million”, he says. “It covers the whole of the sector in an enormous amount of different ways.”

It is vital PSNC has “more resource to be able to do that”, he adds.

“We've had flat funding for the last six or seven years, which has been unhelpful, but it was necessary in light of some of the external factors, which I'm sure everybody's aware of,” he tells C+D.

“I think it's high time that we saw more money put into PSNC, to support its work.”

Which proposal caused “quite a lot of controversy”?

According to the proposals, “introducing independent governance as part of reformed governance structures” will ensure the sector is “better listening to the voice of contractors”.

It recommends membership for all PSNC and LPC committees be limited to 12 years – with three terms of four years – but this will only be implemented from April 2023.

“That caused quite a lot of controversy, I have to say,” Mr Thomas admits.

“There was a real debate about whether to go with that recommendation or not. I think for most people, though, it came down to the position where actually if you'd been [with] an organisation for 12 years, it's possibly time that some new blood came in.”

Under the proposals, improvements in oversight, internal processes and external transparency should also be delivered, through a governance framework for PSNC and LPCs to include: a code of conduct for all members; local and national key performance indicators; and expectations regarding transparency and communication.

In an effort to reduce variation between LPCs, improve their efficiency and focus their activities, the report also recommends reducing LPC committee sizes to a range of 10-12 members while maintaining local proportional representation.

“There is evidence to suggest that smaller boards, smaller groups of people are actually more effective at what they do,” Mr Thomas tells C+D. “We had a look at the different LPC committee structures and some of them have in excess of 20 members.”

“There is an opportunity to have a good, hard look at those committees and say, actually, are we being as effective as we could be, are we getting the engagement from all members?” he adds.

It is the RSG’s proposals around governance that Mr Thomas also believes are the RSG’s most significant recommendations.

“Getting a unified governance structure across LPCs and PSNC will be hugely beneficial for the way both LPCs and PSNC interact, but also the way they act in carrying out their functions.

“Money is always a good thing. I’d be very happy to see more flow into PSNC. But I think the whole governance point is one of the key things.”

Mr Burdon agrees: “We're very aware of the NHS structures and how they've developed over the last few years and they’re likely to change over the next few years. So, it's inevitable that there'll be some amount of change coming down the line for community pharmacy as well. If we get the governance right now, it allows us to put ourselves in the right place.”

Under the proposals, LPCs will also be supported “to become more efficient and to review their boundaries in line with NHS integrated care system changes, subject to the view of local contractors and NHS England and NHS Improvement (NHSE&I)”, the RSG said.

“By renaming ourselves Community Pharmacy England, it does exactly what it says on the tin. I think that's really important to try and help the understanding of what the negotiator is and does,” Mr Thomas tells C+D.

But will a switch up in branding impact how NHSE&I views the community pharmacy sector?

“Initially it probably won't make a huge amount of difference, because the people that we're dealing with, metaphorically on the other side of the table, are going to be the same. They're going to see the transition from PSNC to CPE,” he says.

But PSNC does have “a huge amount of external engagement”, he adds.

“The first thing you have to do at the moment is explain who PSNC is and what it does. I think Community Pharmacy England will make that a more straightforward conversation. So, will it make an awful lot of difference as negotiator with government bodies? Possibly not. Will it make a bigger difference with people external to that? I think it probably will.”

“This is one solution for everybody”

There are, however, notable proposal exclusions.

In a statement released last week (May 19), the National Pharmacy Association announced it was advising its members “with some degree of reluctance to support an affirmative vote, because the benefits marginally outweigh the several valid arguments for a ‘no’ vote”.

“Swift improvements to the governance of PSNC and LPCs, including clear accountability and a much higher degree of transparency,” is vital, the NPA added. “This should include incorporation of PSNC as a limited company so it is at least held accountable to the tried and trusted accountabilities of company law”.

But what do RSG members make of the reaction?

“I think it's been quite positive,” Mr Burdon admits. “There was – and quite rightly and understandably – a great deal of concern among certain quarters. Some people were expecting this to be really prescriptive and set out in tablets of stone, what would happen. They were worried about what would happen to them and their jobs and their positions.”

Does he feel these proposals go far enough? “For me, it was about getting the unanimity across all of community pharmacy. That is vital. Introducing anything that's divisive, would be unhelpful,” he responds diplomatically.

“An accusation that's often levelled against us is that there's too many [pharmacy] bodies, that we don't speak as one voice. But I think when you when you drill down, we actually do,” he adds.

“Of course, some people will say, ‘you didn't cover my issue’, or ‘you didn’t manage to get far enough on that particular issue’. That's because this is one solution for everybody and community pharmacy is much better served by working together as one, than being divided, fragmented.”

Further information on how contractors can cast their votes can be found here. Voting will close on June 17.