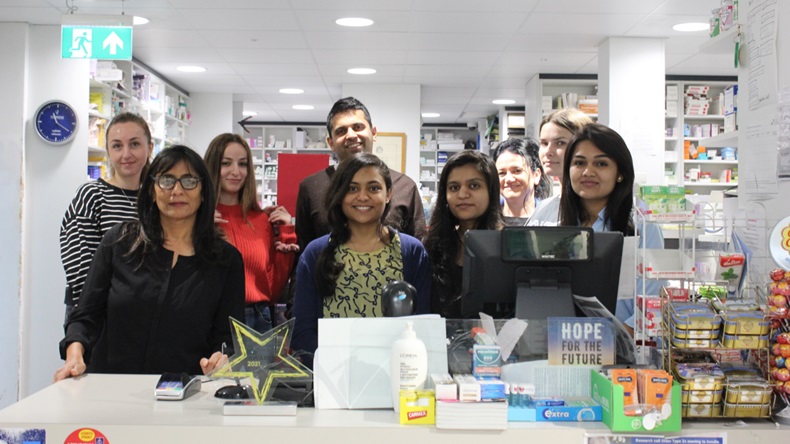 Funding cuts, medicine shortages, and the hurdles to attract staff are issues experienced by many community pharmacies across the UK, with some contractors disconsolately forecasting many more rainy days.

But Mitesh Desai, CEO at Landys Chemist in Finchley Road, north London appears very calm as he patiently serves a customer during a busy Friday morning in May, while the rest of the team efficiently handles other patients’ requests.

The winner of C+D’s Independent Pharmacy of the Year Award 2021 later tells C+D that while his pharmacy is no stranger to the pressures the sector is facing, he is never stressed.

“If anyone feels stressed, it means that we’re not doing something right,” he adds.

How can such a busy high street pharmacy, offering a smorgasbord of services on top of running a successful online business, give out such a zen energy?

A 40-year-old pharmacy and its e-commerce business

Landys Chemist is a bricks-and-mortar pharmacy, which Mitesh’s dad bought in 1982 from its previous owner, Tony Landy.

While Mitesh's two sisters both followed in their dad’s footsteps in becoming pharmacists and are today also part of the family-run business, Mitesh (pictured below) studied economics at university and initially spent a few years working for investment banks. 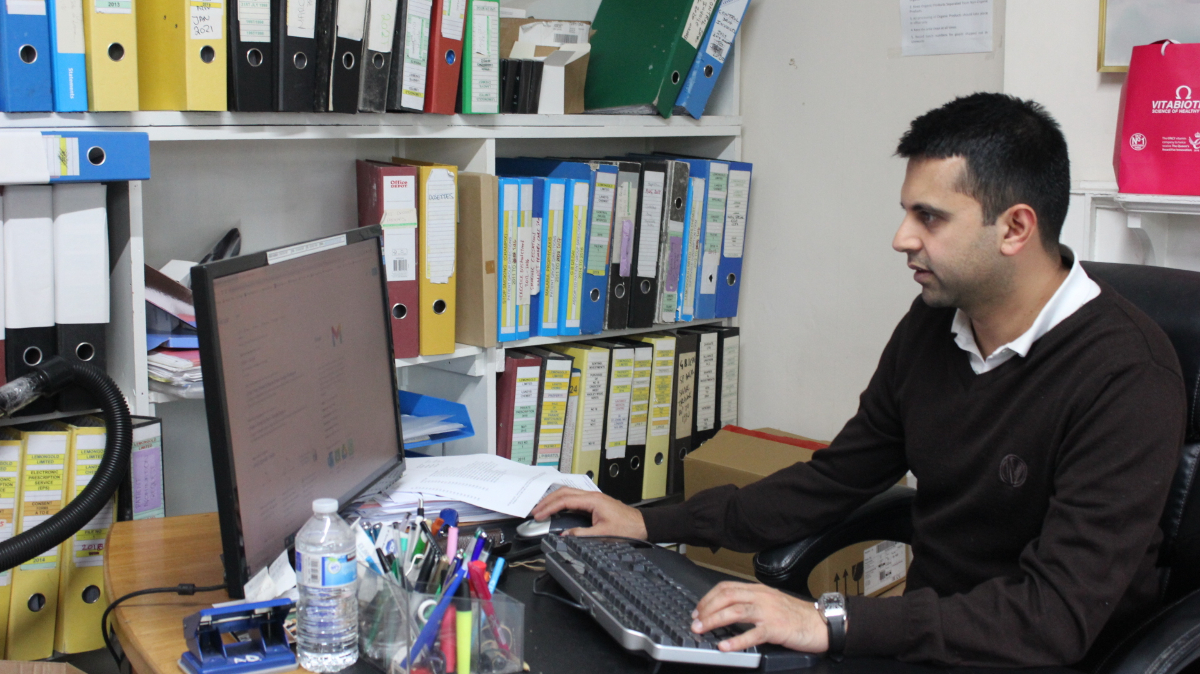 But working for financial institutions left him tired and eager to work with his relatives, so he joined the family business in 2012.

Mitesh’s business acumen came in handy when, about 10 years ago, he saw an opportunity to further develop the business – this time, beyond its local community.

It was no easy feat convincing his parents to venture online, he says.

“With parents, the older they get, the more cautious they are. When you say, ‘Oh, I want to spend some money, with no guarantees whatsoever, no certainty of a return’, of course to them that sounds like a terrible idea.

But, “in a way, it’s never been more important. Even older people are becoming more and more digital”, he adds. Eventually, Mitesh was able to settle his parents’ nerves.

“Now they see that it makes so much sense. There’ll almost certainly be more funding cuts to come for pharmacy on top of what’s already happened, which means more and more pharmacies are going to close down, which also means fewer and fewer people are going to have the access they need to healthcare,” he says.

Having an online business means the pharmacy is better able to assist customers with their requests and avoids losing them to competition.

While Mitesh has steadily been building the online pharmacy platform over the past 10 years, he admits “things went bananas” when the COVID-19 pandemic hit, to the point where the pharmacy had to suspend online ordering for a few days to catch up with demand.

“I returned from honeymoon at the beginning of March, and we’d gotten [maybe] 1,000 orders overnight and it was like that every single day. We were so unprepared for it; we didn't have the staffing... there was no point in keeping collecting orders. The last thing you want is to not be able to fulfil [them].

“We basically used four or five days to kind of catch up, figure out a new plan, get more staff, and then we restarted.”

Landys Chemist ships around 3,000-4,000 orders a week now, but at the height of the pandemic this rocketed to nearly 6,500, which Mitesh admits was not sustainable.

Keeping the online pharmacy packed with plenty of different brands – including “50 or 60 different vitamins” – has helped keep customers coming back to Landys Chemist over other outlets, Mitesh explains.

In praise of competition

It is Mitesh’s views on his business's competition that has been a key factor in the success of this friendly neighbourhood pharmacy.

With Landys Chemist neighbouring three health food stores and two other pharmacies, there was an urgent need to stand out. The pharmacy responded to this by completing some refurbishment works before the pandemic and by building an extension to the dispensary to boost efficiency.

“Competition can be so productive. Because when you don’t have competition, what do you do? You get lazy,” Mitesh says.

The Desais’ buoyant view of competition fosters collaboration with other parts of the healthcare sector. Indeed, Landys Chemist has great professional relationships with local doctors – in particular, Mitesh’s father and sister regularly meet up with the main surgery in the area once a quarter, to chat about what’s going on and which challenges the GPs are facing.

“It can be a very informal [chat], but it’s also very productive. If you see everything as competition, and you see competition as threat, then you’re always going to have issues,” Mitesh adds.

“So many pharmacists, probably all the ones who complain about competition, are only focused on one part of their business, which is just giving out scripts… but there’s opportunity in other places,” Mitesh argues.

He strongly believes that healthcare is a “holistic business”. 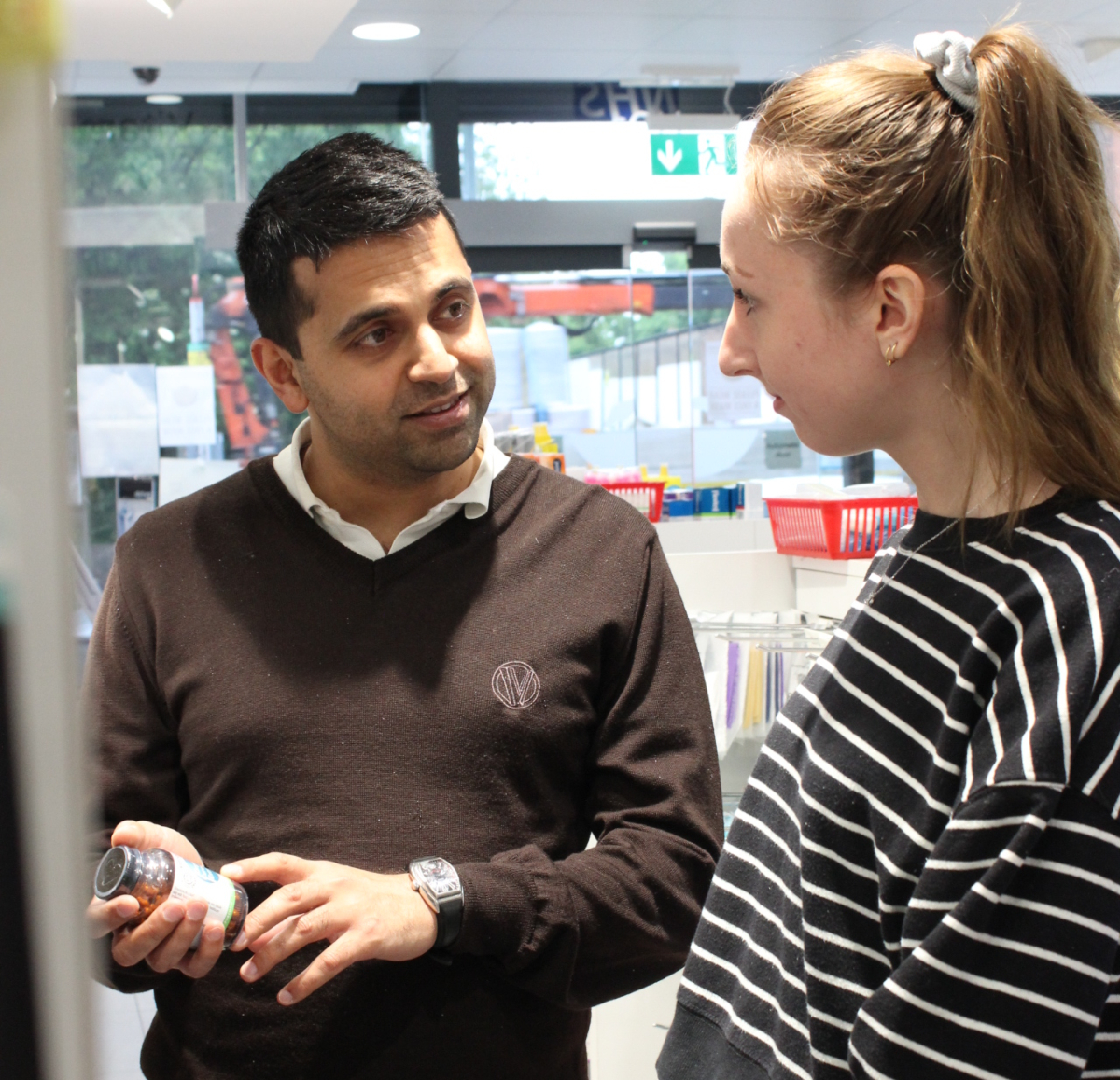 “Customers want a lot more than just for their script to be given out – they want advice, they want help. They want to be told how to live healthier lives,” he adds.

Among the services offered by the pharmacy, patients can also choose to speak with a trained nutritionist, one of whom is Mitesh himself.

“We are not a pharmacy, we are a wellness business,” Mitesh stresses. As such, the business makes people feel better in different ways: by offering clinical advice; medication; natural or homeopathic solutions… even perfume to make people feel “well and happy”.

“There are so many different ways to engage in wellness and I think to just be a pharmacy now, you’re really limiting your scope,” he adds.

Mitesh is very keen to pass on his knowledge to the rest of the team, too, which he does by hosting workshops. “Every single week, we [offer] a targeted training programme where we’ll pick one specific product, and then we’ll talk about it in detail and give loads of key selling points and loads of great ideas of when and how to recommend it,” he says.

Training the workforce of the future

While work goes on to innovate the business both online and within the 73-year-old premises, the pharmacy also keeps close ties with schools and universities to offer plenty of work placement opportunities.

The team regularly takes school goers under its wings for a couple of weeks or so, to “show them a business” rather than just have them “stand on the counter and serve some customers, because what do they really gain from that?”, Mitesh says.

The pharmacy also attracts pharmacy students and Mitesh proudly reveals that one of their current pharmacists completed her pre-registration training at Landys Chemist.

“We like to support young people on their journey; we like to show them not just how to be pharmacists, but also how to potentially run their own businesses one day,” he adds.

With talks of pharmacist shortages and contractors lamenting difficulties in hiring pharmacists, Mitesh believes that it is important that pharmacy students get the first-hand experience of working in a community pharmacy.

A University College London pharmacy student currently works at Landys Chemist. By giving her the real-world experience of working in the sector, Mitesh hopes she may think twice about searching for “the highest paying job” or joining the NHS.

“It’s a very different experience being an NHS pharmacist to being [in] community. However, having worked here for a couple of years, she’s going to be thinking: ‘Oh, actually, I love that vibe. I like meeting new people. I like that every day is fast paced, it’s different.’”

At the heart of Landys Chemist’s ethos, there is a feeling of responsibility for the next generation from an environmental perspective, too.

Mitesh has always had an “eco-conscious mindset”, he tells C+D, but the pharmacy’s journey to become plastic-free was a “gradual thing”, which started about four years ago.

“We would have these massive rolls of bubble wrap coming in…they were literally my size, big fat things. I just looked at them and thought: ‘This is disgusting. We are just sending it out to customers who then just chuck it away’,” he says.

He knew his staff had to stop ordering bubble wrap cold turkey, which they’ve replaced with perforated packing paper – while they are also using paper to fill voids in boxes. 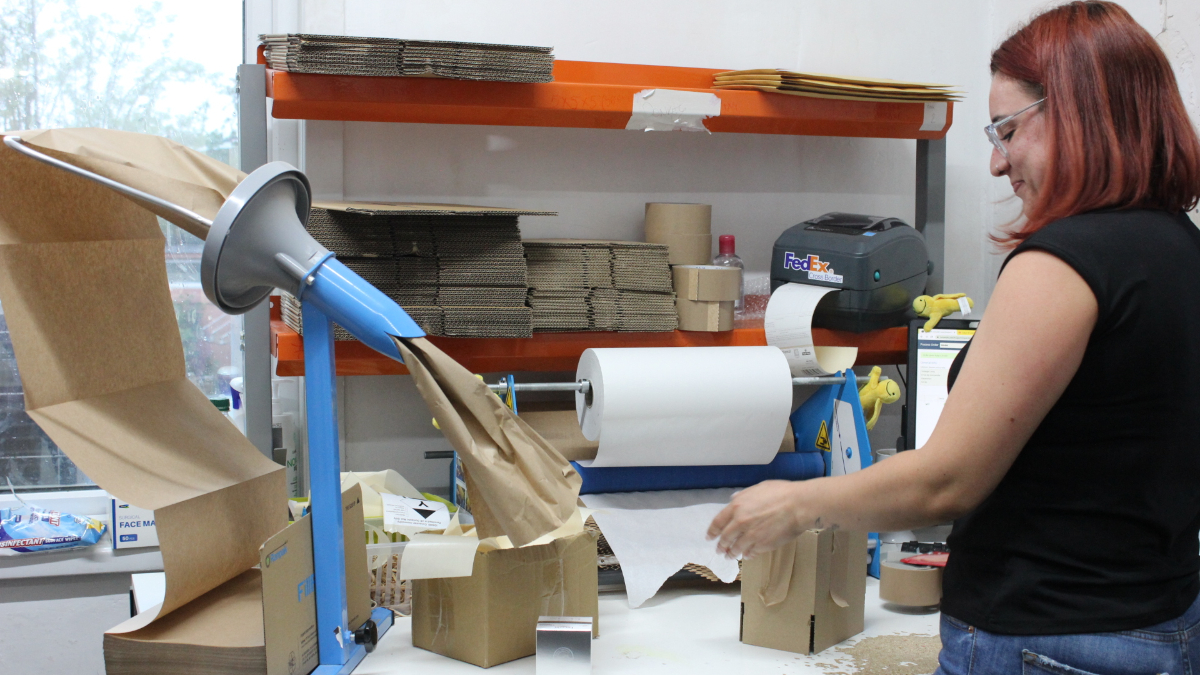 Mitesh and his team even went one step further and are now ordering paper Sellotape to seal their boxes.

Customers love and praise the pharmacy’s move to ditch plastics, but the truth is these eco-friendly materials cost money, Mitesh says.

“I’m actively choosing to pay [around] three times more myself than I have to… but to some extent, I’m really doing it for myself, because this is the world that we live in.

“If your business doesn’t make enough money to allow you to do this, then your business is not worth it. If you’re having to cut costs to that extent, to try and be competitive or to try and make margin… it’s just not worthwhile,” he says.

The power of family

Working with relatives might sound like a nightmare for some people, but it seems to be working wonders for Landys Chemist.

In fact, the pharmacy not only scooped the C+D Award – which Mitesh tells C+D was a very special accolade – but Landys Chemist was also nominated for a couple of family business awards, one of which it won.

“It reflects what we feel as a family about this business and how we work towards it, and also how we try to make our staff feel like they’re part of the family too,” he says. 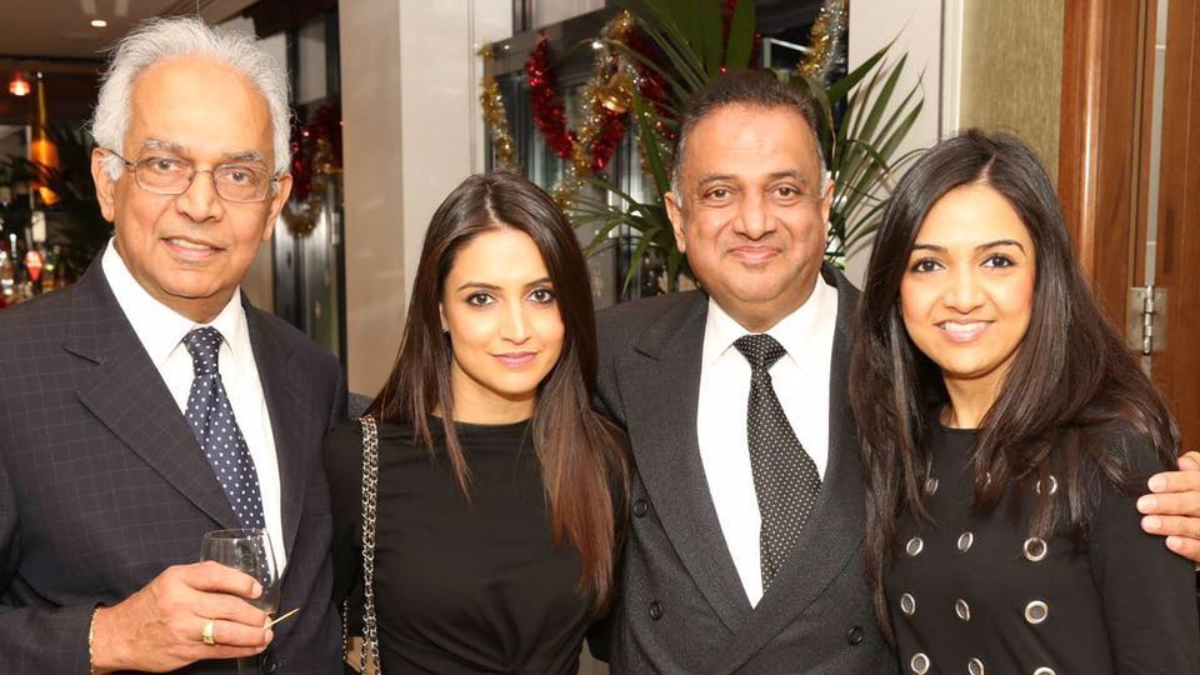 Winning a C+D Award has helped to “distinguish us among other independent pharmacies”, Mitesh says, which is ever more important in this competitive business market.

But with exciting initiatives already on the go, we’re certain this won’t be the last time Landys Chemist is hailed as a leading independent pharmacy. Watch this space.

Could your pharmacy be crowned as a C+D Award winner? Check out all the categories for the 2022 awards and enter today