As former HM Treasury minister Steve Barclay is appointed health secretary, C+D looks back at his voting record and opinions on the pharmacy sector. 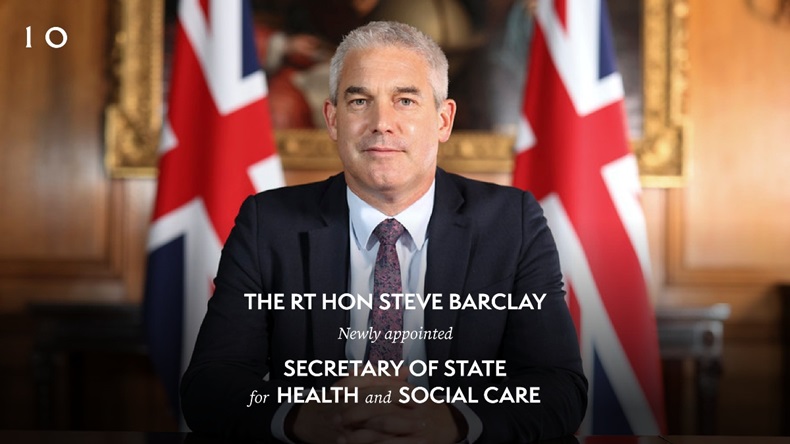 Source: 10 Downing Street Steve Barclay: "This government is investing more than ever before in our NHS"

His appointment follows a number of resignations from cabinet ministers over the last 24-hours, with the North East Cambridgeshire MP replacing Sajid Javid (July 5), after Mr Javid stood down from the role.

In a statement released yesterday evening, Mr Barclay said it was “an honour” to be appointed health secretary.

“Our NHS and social care staff have showed us time and again – throughout the pandemic and beyond – what it means to work with compassion and dedication to transform lives,” he said.

The government, he added “is investing more than ever before in our NHS and care services to beat the COVID-19 backlogs, recruit 50,000 more nurses, reform social care and ensure patients across the country can access the care they need”.

Mr Barclay was a vocal leave campaigner and served as secretary of state for exiting the European Union (EU) from 2018 to 2020, when the UK left the EU.

He then became chief secretary to the Treasury between 2020 and 2021. Most recently, he has served as the Chancellor of the Duchy of Lancaster and chief of staff in Downing Street, after a shake-up following the Partygate scandal earlier this year.

Mr Barclay begins his role at a crucial time for the pharmacy sector, after previous incumbent Mr Javid announced his intentions to reform primary care – starting with pharmacy – at the NHS ConfedExpo in Liverpool just last month.

A couple of weeks ago, pharmacy minister Maria Caulfield told C+D that an announcement on the government’s planned pharmacy overhaul is only “weeks away”.

Read more: Pharmacists ‘must be at heart’ of prevention as Javid ushers in reforms

But in his Treasury role, Mr Barclay faced significant criticism from pharmacy bodies for failing to provide pharmacies with COVID-19 costs relief and inadequately funding the sector.

He reiterated the monetary commitment of the Community Pharmacy Contractual Framework, in response to questions from MPs throughout 2020, and in April 2021 he also declared that “the government has put in place a comprehensive package of support for community pharmacy during the pandemic”.

Mr Barclay was also a member of the government’s UK Vaccine Taskforce, which was held responsible for delaying funding for the COVID-19 vaccination programme.

While the first COVID-19 vaccine was administered on December 8, 2020, the taskforce’s report was only published on February 12, 2021, officially approving money for vaccination resources. By this time, close to a million people had received their first vaccine.

Pharmacy should be “first port of call”

Mr Barclay is not new to the Department of Health and Social Care (DH), having previously served as a health minister – from January to November 2018 – under former health secretaries Jeremy Hunt and Matt Hancock.

During this time, he complimented the value pharmacies provide when discussing NHS efficiencies.

There is a “valuable role played by pharmacies”, he told MPs during a House of Commons debate in October 2018.

“We want to ensure that rather than people’s first port of call being a GP, they access the NHS and pharmacies at the appropriate time,” he added.

Earlier in the year, after the closure of a walk-in centre in Lincolnshire, he also advised that the “use of local pharmacy walk-in facilities would better meet the health needs of the local population”.

Voted in favour of pharmacy cuts

Since entering parliament in 2010, he has always sided with the government on votes regarding health issues, which included voting in support of the government’s 2012 overhaul of the NHS.

More recently, in October 2019, Mr Barclay voted in favour of a Queen’s Speech that called for continued empowerment for GPs to commission services, a strong Care Quality Commission, and not to reverse a decision to seek to cut admin costs, for example by abolishing primary care trusts.

He was also among the 305 MPs who voted in favour of cutting pharmacy funding in England, following a parliamentary debate in November 2016. Only one Conservative MP voted against the cuts.

“Pharmacy must be appropriately funded”

Following his appointment, the Pharmaceutical Services Negotiating Committee (PSNC), Royal Pharmaceutical Society (RPS) in England and the National Pharmacy Association (NPA) revealed in separate statements that they were looking forward to working with the new health secretary.

“The NPA will of course be in contact with Mr Barclay to offer the hand of partnership for improving access, addressing health inequalities and delivering excellent patient care,” NPA director of corporate affairs Gareth Jones said.

The body “maintained a close and constructive dialogue with Mr Javid and we hope that will continue with his successor”, he added.

Meanwhile, PSNC chief executive Janet Morrison argued that the sector could do “so much more, but only with appropriate funding”.

“We look forward to working with Mr Barclay, the pharmacy minister and their colleagues to further dialogue about the future role and funding of community pharmacy.”

Commenting on the work achieved under Mr Javid’s leadership, chair of RPS in England Thorrun Govind said, that he “recognised the vital role of community pharmacy and the potential of a ‘Pharmacy First’ to support patient access to care”.

“I would urge the new health secretary to see this through to completion,” she added.

With the publication of the NHS long-term plan and government’s workforce plan also expected later this year, “these must support a more ambitious approach to advancing the clinical role of pharmacists across the NHS, to better meet changing patient demand, backed by investment in pharmacy education and training”, she added.