Pharmacist trainees gathered to protest outside the General Pharmaceutical Council’s (GPhC) office in Canary Wharf, east London, in light of the chaotic June 2022 registration assessment. Here are C+D’s key takeaways from that day 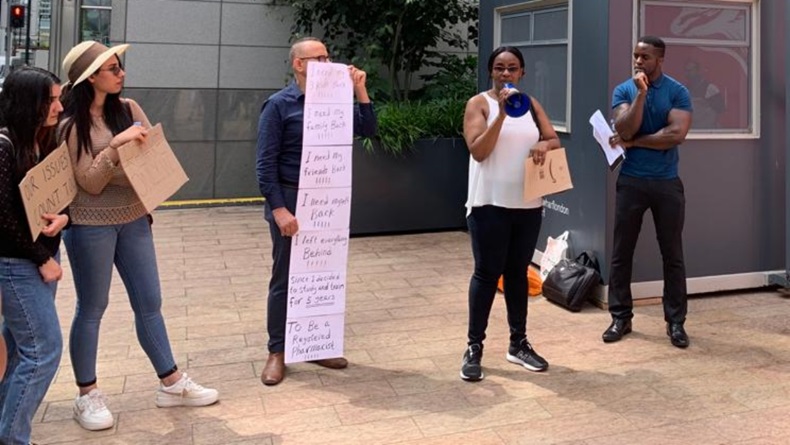 Earlier this week, a group of pharmacist trainees gathered just down the road from the GPhC’s headquarters, under the scorching July sun.

Many had taken time off work or travelled from different cities. They carried signs proclaiming: “Our issues count too!” and “Fair treatment for all”.

The group patiently waited for the protest organiser, pharmacist tutor Marvin Munzu, who was scheduled to meet with GPhC representatives along with three trainee delegates, to discuss trainees’ concerns following the chaotic registration assessment on June 29.

When Mr Munzu finally emerged some time after 11am, he was greeted by a triumphant cheer. He first addressed the crowd, giving them a rundown of what was discussed at the meeting and the groups’ objectives in staging the protest.

Armed with a megaphone, trainees then individually addressed the crowd, recounting their experiences on the day and the emotional turmoil that had followed since.

So what are the key takeaways from that day?

Addressing protesters gathered outside 25 Canada Square, Mr Munzu said: “When the time comes, everyone is going to remember that you guys came down here and that’s why there is change.”

“This will go down in history as the first demonstration for fairness and equality by any trainee pharmacist group,” he stated.

The protest and the failings of the registration assessment are “a national issue”, he continued, adding that “this country needs pharmacists”, especially as patients face an ever-rising NHS backlog and difficulties securing appointments with general practitioners. 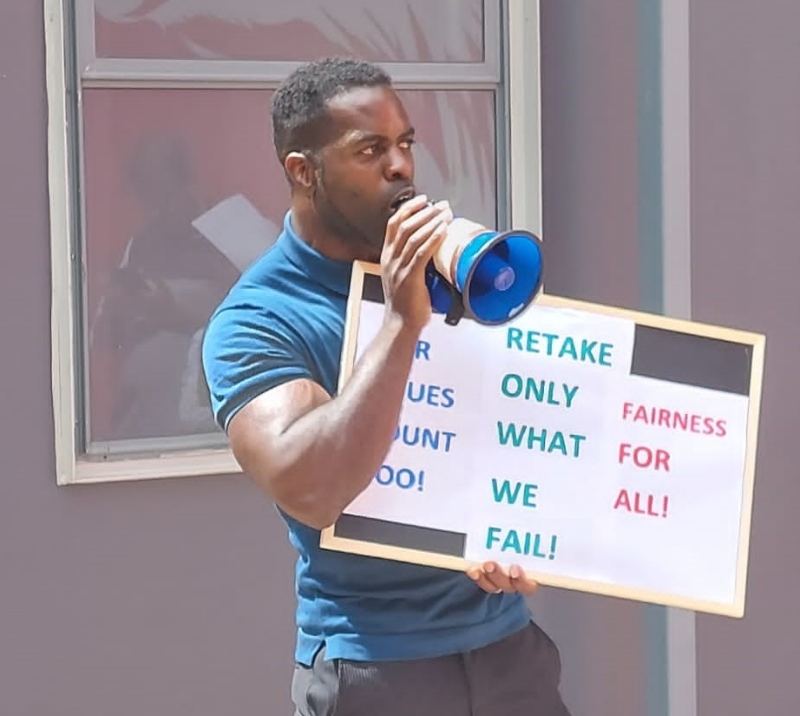 Though the meeting was initially scheduled to last 30 minutes, delegates remained in the GPhC offices for just over an hour.

The GPhC was “willing to listen” to the delegates, Mr Munzu told the trainees gathered on Canada Square.

The meeting “went a lot better than expected”, he told C+D at the end of the protest. “The GPhC has been very supportive in organising this protest with us, and also organising the meeting.”

The delegates shared their experiences on the day of the exam and put to the GPhC a list of requests compiled between exam candidates in the weeks after the exam, making it clear to the regulator that issues were not isolated to the single exam centre in Nottingham.

“They were quite receptive, it was a very positive meeting, and now we just have to wait for the outcome."

3. Will the GPhC address protesters’ requests?

Trainee pharmacists came to the protest with three main asks:

Mr Munzu could not confirm whether the GPhC would grant these following the meeting.

“I think they’re going to think about them and I’m hoping that they will grant them,” he said.

“They did share a lot of things with us that show they are committed to doing something” about the fallout following the exam, Mr Munzu added, and he said he left the meeting feeling hopeful.

Mr Rudkin told C+D yesterday (July 14) that the council would discuss trainees’ requests, “and will be in touch with the delegation to update them on our response”.

4. Meeting was for “all trainees”

Mr Munzu stated it had been “a very difficult period for all” trainees who sat the registration assessment last month.

“We came down here not just for a few trainees, we had to represent all the trainees in the country."

Mr Munzu and the delegates presented as many trainee comments and requests from exam candidates as possible to Mr Rudkin and Mr Voce, he said.

He urged trainees who were not able to attend the protest not to “give up”.

Speaking to C+D last week, many exam candidates shared that they had found the calculations paper very challenging.

Mr Munzu echoed these sentiments when addressing the crowd.

“In my years of training pre-reg students, I’ve never had so many trainees complain about a calculations paper as they did this year,” he said. “Never.”

“In my opinion,” he added, “the calculations paper had an added difficulty to it.”

Delegates asked the GPhC to review the calculations paper in light of trainees’ claims and suggested the regulator lowers the pass mark, Mr Munzu informed the protesters following the meeting. They also asked the regulator to consider the eight-year limit for sitting the registration assessment, especially as many trainees might not feel ready to re-sit the exam in November.

One trainee present at the protest said: “I actually think difficulty might not be the right word,” calling the calculations paper a “misrepresentation”.

A number of trainees also shared they were stumped by the calculations paper, stating it did not reflect the preparative material they had used.

Catch up with C+D’s coverage of the protest.

GPhC confirms which exam candidates will be offered provisional registration