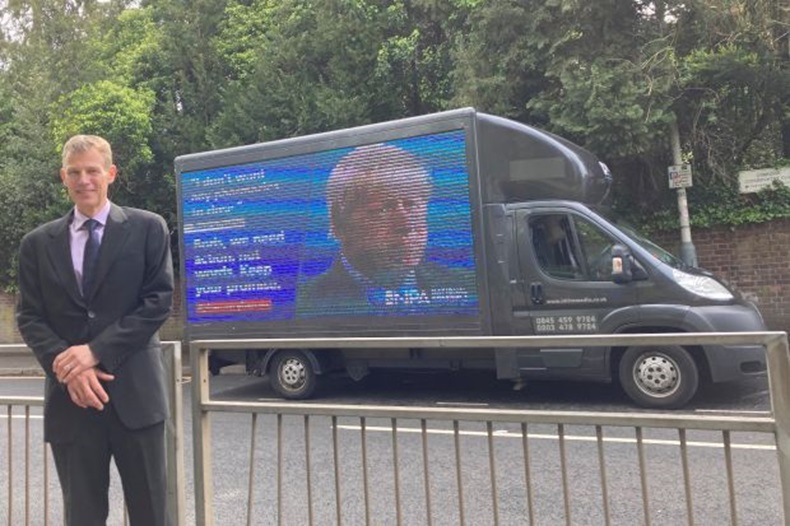 C+D joined the NPA as it drove a van from Boris Johnson’s London constituency to Westminster campaigning for the government to cover pharmacy’s COVID-related costs.

Adorned with images of Prime Minister Boris Johnson and slogans including “#BorisKeepYourPromise” – inspired by Mr Johnson’s pledge in February that community pharmacies would be reimbursed “as soon as possible” for COVID-related costs – the van is the latest stage of the National Pharmacy Association’s (NPA) campaign to get the government to write off the sector’s £370 million advance payment.

C+D followed the van on its journey from the Conservative Club in Uxbridge to the Houses of Parliament yesterday (May 18), and spoke to some of the people involved in the campaign:

For subtitles, select CC on the YouTube tool bar

“Drop in the ocean” for the government

In an exclusive interview with C+D, NPA chair Andrew Lane said the advance payment was “a drop in the ocean” compared to other government bailouts given during the pandemic. The Pharmaceutical Services Negotiating Committee (PSNC) estimates the sector’s COVID costs bill now exceeds £450m.

On April 28, PSNC announced the 2021/22 contract negotiations had begun, but stressed that it was “unlikely” to make any final decision “until we have clarity on COVID costs”.

Asked about this statement, Mr Lane responded: “We would like the COVID costs paid for before any discussions on funding go forward.”

Previously, the NPA had enlisted the help of pharmacies in key constituencies – including those of the chancellor Rishi Sunak, pharmacy minister Jo Churchill and health secretary Matt Hancock – for a targeted ad campaign.

Yesterday, Mr Lane claimed that the NPA had received feedback from several of those ministers, and said “we believe they were upset”.

C+D also spoke to Vivek Aggarwal, the manager of Puri Pharmacy in Mr Johnson’s Uxbridge and South Ruislip constituency, who stressed the importance of the campaign, not just for his pharmacy – which he said “will not be viable any longer” if further funding pressures come to pass – but for the NHS as a whole.

Pharmacies have been “central in providing continuity of care” during the pandemic, he said, and if they were to close due to funding issues then “the NHS is really, really going to suffer”.

One of his regular patients, Yvonne Powers, told C+D she had written to Mr Johnson after hearing about the NPA’s campaign. She was reportedly told that she was “misinformed”, and that there was “no way” the government was going to let chemists close.

Has your pharmacy joined the NPA's COVID loans campaign?