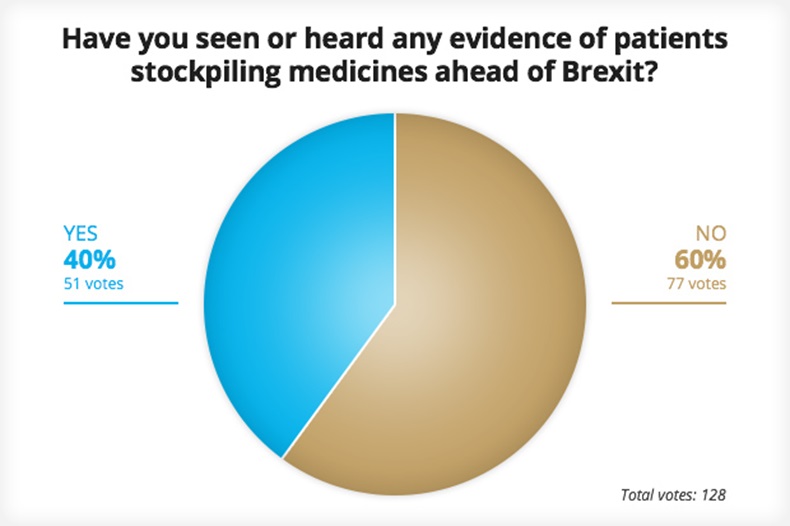 Four in 10 pharmacists and staff who responded to a C+D poll have seen evidence of patients stockpiling medicines ahead of Brexit – as the majority continue to see no signs of it.

Fifty one of 128 respondents to the poll – which ran on the C+D website from January 22 to March 18 – said they had either seen or had evidence of patients doing this, although 77 (60%) said they have not witnessed stockpiling in the run-up to Britain leaving the EU.

The Department of Health and Social Care (DH) said healthcare providers should advise patients that “the government has plans in place to ensure a continued supply of medicines to patients from the moment we leave the EU. Patients will not need to and should not seek to store additional medicines at home”.

However, medicines stockpiling has been highlighted in the national media, and a survey this month from finance provider Premium Credit of 1,158 consumers revealed that 17% have started stockpiling either food, drink or medicines. Of these, 63% confessed they were storing extra medicines.

Olivier Picard, owner of Newdays Pharmacy in Berkshire, told C+D yesterday (March 18) that patients are generally sensible on this issue, but said fears over Brexit shortages are influencing behaviour.

“Most patients do not stockpile medicines,” he stressed. “That said, last week a lady came to order her repeat prescription only a couple of weeks after receiving the last supply. She told us that she was ordering early in case we weren’t able to get her medication after Brexit.

“Only today, another patient asked me whether there are any supply issues with insulin, because he was worried that as a type 1 diabetic he may not be able to get his prescription fulfilled promptly after Brexit,” Mr Picard explained.

Kate Adjei, manager at Nories Pharmacy in Horsham, West Sussex, said she had not seen patients stockpiling drugs, but agreed the uncertainty over Brexit has created anxiety, which pharmacists are doing their best to allay.

“A few people have mentioned putting their repeat requests for medication in a week earlier to help build up their reserves, but it hasn’t been excessive,” she told C+D.

“People trust us – most of the time – to get their medication and we keep them updated about the current shortage.

“Rather, what is happening on a weekly basis is people coming into the pharmacy to ask us how Brexit will affect the supply of the medication they are taking. To those questions and concerns we simply can’t answer, but we will always try our best,” she added.

Mr Picard welcomed the new shortages powers, which will allow pharmacists to dispense an alternative in accordance with a “serious shortage protocol” that could be announced by the government – rather than the prescription and without contacting the GP – in the event of a national medicines shortage.

The powers are “good news”, he said, “because it should make it easier to ensure patients get their medicines in a timely fashion”.

Have you seen any evidence of patients stockpiling?

‘How Brexit uncertainty is affecting my online pharmacy’

Our patients are not stockpiling medicines, contractors tell C+D

Contractors: Shortages of naproxen are 'killing us'