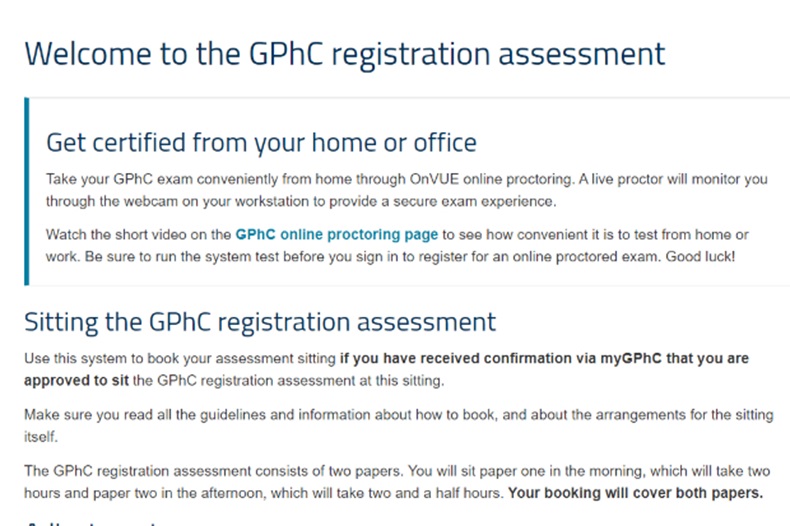 The apology comes after some candidates looking to sit the March registration assessment in two weeks’ time were either wrongly booked into afternoon sittings, or told to travel hundreds of miles to find a test centre with space.

“Making life more stressful for any candidates, particularly at this difficult time, is the last thing we want to do,” Mr Rudkin said in a statement yesterday (March 2). Resolving these booking issues remains the GPhC’s “top priority”, he said.

The regulator is “making good progress” to address these problems, according to Mr Rudkin, who said that the GPhC has worked with the test centre provider Pearson VUE to “identify additional capacity, particularly for candidates in Scotland”.

When candidates were invited to book a slot for the March registration exam last week (February 25), some based in Scotland were reportedly told they would have to travel to test centres in Wales, Newcastle, Carlisle and the Isle of Mann to sit the assessment, as there were no available places in the country.

The GPhC is “currently working to finalise arrangements” for additional exam places and “aims to be in touch with relevant candidates very soon,” Mr Rudkin added.

Last month, candidates residing in countries with a time difference to the UK of two hours or more were told they will be able to sit the March assessment remotely at home, after initially being told their exam would be cancelled partly due to the risk of the questions being shared among candidates sitting in different time zones.

Some overseas candidates were expecting to receive confirmation that they would be able to sit the assessment remotely last week.

Mr Rudkin said in his update yesterday – two weeks before the exam – that Pearson VUE has booked places for both remote and overseas sitters and that those candidates should expect a confirmation email from the exam provider.

Pearson VUE is also seeking to reallocate candidates who had booked to sit the exam in the afternoon “due to a technical error… to a morning sitting”, Mr Rudkin said. The GPhC previously confirmed that the exam for UK-based candidates will take place in the morning only.

In a statement to C+D today, Pearson VUE said that “a limited number of bookings – 60 out of over 2,700” were affected by the “technical issue” last Friday (February 26).

“Pearson VUE worked closely with [the] GPhC to reschedule exams for candidates with incorrect afternoon bookings and apologises for any inconvenience or confusion caused.

“Over 3,000 candidates have now successfully booked their test appointments at either a test centre or with Pearson VUE's online proctoring solution, OnVUE,” the provider added.

“We are continuing to work closely with the GPhC to resolve any remaining scheduling issues for candidates.’’

The Pharmacists’ Defence Association (PDA) said in a statement earlier this week (March 1) that, in consideration of the challenges experienced by this cohort of candidates to date, “it is no longer reasonable or realistic to say that sitting the registration assessment this March should count as one of the limited number of attempts candidates have to pass the exam”.

A GPhC spokesperson told C+D today: "We are in regular contact with the PDA in relation to the registration assessment and carefully consider all of their feedback and suggestions in this area".

The PDA added that the GPhC’s decisions to postpone the 2020 registration assessments and move to an online version for the first time this year “need scrutiny, and we know concerns have been raised with the Professional Standards Authority (PSA) the body that regulates health regulators”.

Read why pharmacist Thorrun Govind believes it is difficult to excuse the ongoing problems with the March registration assessment.

Will you sit the GPhC registration exam in March?

‘Excusing the problems with the GPhC registration exam is difficult’