Nearly half of readers will reduce their staff as a result of the government’s planned 6% cut to pharmacy funding in England, a C+D poll has revealed.

Forty-eight percent of 549 readers said they will “have to reduce the number of staff we employ” because of the cuts, which will see the global sum slashed by at least £170 million in October.

Almost a fifth of readers said the drop in funding would leave their pharmacy “unviable” and at risk of closure, according to the poll, published on the C+D website between December 21 and January 13.

A quarter of readers said they will have to reduce the services they offer patients as a result of the cut, while less than one in 10 said they expect the cuts to have “no significant impact”.

What will the biggest impact of the £170 million cut to English pharmacy funding will be to your business? 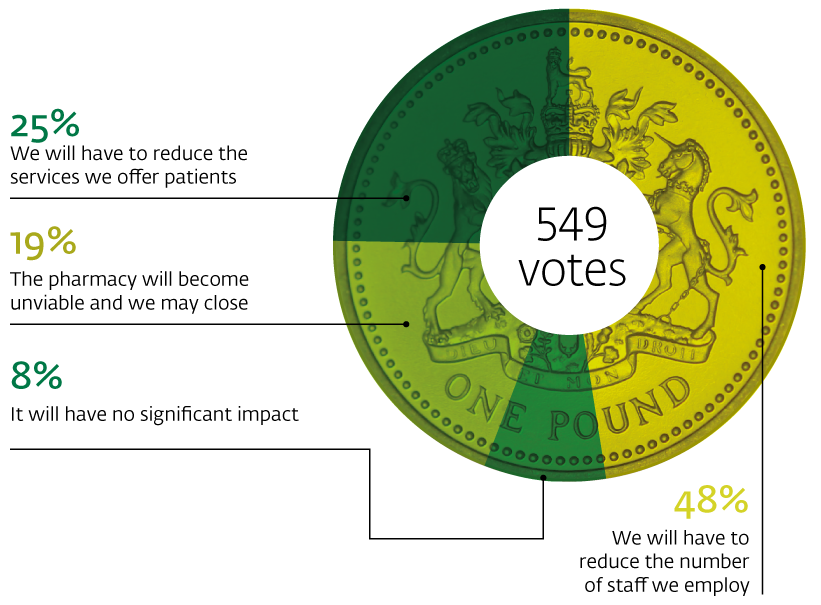 Kent contractor Amish Patel said he has already begun to make savings in preparation for the drop in funding.

“I may even look at limiting patients to one [free] delivery a month. I have a full time member of staff leaving soon – I will not replace her,” he posted on Twitter.

Rekha Shah, chief executive officer of LPC consortium Pharmacy London, warned that contractors are having difficulty planning for the cut. “It works well for the NHS but many contractors feel hard done by,” she said.

Pharmacist John Munday warned that contractors will lose out if they fail to pay their staff reasonable rates as a result of the cuts, because their “great teams” may look to elsewhere for employment.

What effect will the cuts have on your pharmacy?

Posted on Thu, 14/01/2016 - 10:51
Whether you're a director of a multiple, an independent contractor, an employee or a locum there is no way that a cut in remuneration is something to be gloated about. The money filters down. How it filters down varies between companies, but the only sure thing is that if there's less to start with then there will be less making it's way down to employees/locums. I work for a business that employs two pharmacists and pays well over the average and that is why we keep our staff. We all hope to make a decent living out of owning a business, otherwise there would be no point in taking on the inherent risks. I was a locum during the fallow year and I know what we were being paid then and what some locums were demanding. Was this any more moral than what some contractors are doing now? Putting all of this aside, as a pharmacist or technician you should be irritated that whilst everyone is being encouraged to use us to relieve pressure on the system we are being clearly told by the actions of the DH that we are not valued at all. I am aware that some of the posters on here are tongue in cheek wind up merchants, but if you compare the comments here to what is written on GP websites, they may look pompous at times but we look childish.

Posted on Thu, 14/01/2016 - 11:10
nat Mitchell Companies will pay the least amount of money they can get away with to their locums - even if the government increased funding for pharmacy, why wud any sane business man increase locum fees when some polish pharmacist will be willing to work for less - thanks to the immigration policy of successive governments, over supply will kill locum rates - plz stop this pathetic nonsense....

Posted on Mon, 18/01/2016 - 14:01
You're clearly someone with severely limited education as you cannot even spell, leave aside putting a coherent sentence together! Your comments are all the same regardless of which story you're commenting on. If you hate contractors that much, why are you even on this site??! You clearly do not possess the intellect to be debating on pharmacy as your comments show that you clearly don't even understand the basics.

Posted on Fri, 15/01/2016 - 17:23
Sami, since you are probably not a pharmacist owner,or a locum pharmacist or seem to understand how a retail business works,I'm just wondering what you are basing your comments on.

Posted on Thu, 14/01/2016 - 10:03
MEDLEY locums havent had a payrise for years - dont expect any sympathy for the cuts ..not happy sell up....due to the policy of the liblabcon governments on immigration, pharmacists are willing to have reduced fees to run a Pharmacy..... so please stop this cock and bull...

Posted on Thu, 14/01/2016 - 06:35
The idea that staff costs will be targeted should not be a surprise. To maintain a business as viable, your costs have to run below your income therefore if your income falls, do the costs have to fall. Reducing staff costs is one part of this. Other areas which are likely to be affected are the "freebies" - delivery services being the most obvious. I suspect some contractors will limit the number to each patient, or possibly introduce a charge. Other areas might be providing unnecessary CDS trays. Where ever the cuts come, there are some difficult decisions ahead

Posted on Wed, 13/01/2016 - 18:40
No one will close down..this is more lies from contractors........ I will just ask for more discount from our buyers IE COLORAMA WAYMADE..... Please dont believe this scaremongering from contractors.

Posted on Wed, 13/01/2016 - 22:23
More discount just gets clawed back - do t you understand the system ? Unless everyone fraudulently hides discount from NHS - and will people remember not every contractor is boots - who are vertically integrated and make profit at all levels

Posted on Wed, 13/01/2016 - 21:51
I don't watch their lips. Most are liars. They're still making plenty money for the time being. Community pharmacy is still shit though.

Posted on Wed, 13/01/2016 - 16:46
Another article with the fictional issue of contractors closing. Most years since the inception of Category M contractors have been saying any reductions in reimbursement prices will cause multiple closures. Yet so far none. Simply contractors are over paid, and have benefited from the huge reductions in Pharmacist wages.

Posted on Wed, 13/01/2016 - 17:26
Actually you're wrong. It's why the government are now squeezing till the pips squeak. But I applaud your honesty in not trying to dispute the fact.

Posted on Thu, 14/01/2016 - 09:51
Not if the Boots down the road were offering the same service and you lost a load of business. Can't wait for London Locum and you to end up in a home in the future so you can walk 3 miles to the nearest Boots to wait a couple of hours for an unqualified trainee to look for your order, wait for the Skype link to the pharmacist at HQ to authorise and then realise it's still stuck at the hub as the branded generic that the CCG insists on is not available due to being over quota.

Posted on Sat, 16/01/2016 - 09:24
You must be a very caring pharmacist, wishing for people to end up in a home. In fact i might report you to the editor seeing as snitching I seems to be the order of the day.You keep on offering those free services and see where it all ends up. You're nowhere near the bottom yet in case you're wondering. And I hope you live to a ripe old age in your own BIG house.

Posted on Wed, 13/01/2016 - 17:55
Exactly. Do you think the government weren't watching everybody running around like lemmings delivering services for free. And they're still watching now.....

Posted on Wed, 13/01/2016 - 17:44
And engagement with additional services would be overwhelming instead of patchy. Together with a collapse in resale values. Contractors have made fictional claims about their imminent demise for the last 10 years simultaneously increaing both margin and net profit.

Posted on Wed, 13/01/2016 - 17:26
Actually you're wrong. It's why the government are now squeezing till the pips squeak. But I applaud your honesty in not trying to dispute the fact.

Posted on Wed, 13/01/2016 - 17:25
Actaully not. It's why the government are now squeezing till the pips squeak. But I applaud your honesty in not trying to dispute the fact.

Posted on Thu, 14/01/2016 - 09:45
On the basis that I was still at school in the 1980s, I don't see any relevance to the situation I find myself in now 30-odd years later. That great satan of the "contractors" will be different from what they were then. Also, given that the majority - just - of pharmacies are still independent/small chain, I cannot see many of those in yachts owned by owners as they don't have the wherewithal of the Lloyd Boot et al.

Posted on Wed, 13/01/2016 - 15:47
I hope everyone signed the petition “Stop cuts to pharmacy funding and support pharmacy services that save NHS money”. If not please visit the following website. https://petition.parliament.uk/petitions/116943 It may be wise to inform all your staff of the possible implications and participate. We realistically need to get to 100,000 signatures which should not be difficult if everyone participates.

Posted on Thu, 14/01/2016 - 09:55
No Harry, you should sign the petition to help support the small/independents who can offer better quality and service than the big chains or the industry rapidly becomes a profit led duopoly. Go on, you'll thank yourself for it when you're older.

Posted on Thu, 14/01/2016 - 16:29
The devil is in the detail. The cuts always fall on the weakest (inc Employee pharmacists and Locums). The PSNC has ensured that and they will ensure that the corporations that form the majority vote within the PSNC have their way. Do you know anything about the structure and voting rights within the PSNC and LPC's ?????????