Regulators and pharmacy bodies are calling on pharmacies to consider how social distancing can be achieved at their premises.

Where a distance of at least two metres cannot be achieved, pharmacies should close their doors and control entry to the premises, “so that two metres of distance can be maintained”, the pharmacy bodies said.

They stressed that pharmacy teams should have access to personal protective equipment (PPE) “for specific instances where it is a necessary addition to social distancing measures, for example when working in small dispensaries”.

“GPs and dentists were told very early on that they could close their doors and let people in one at a time. We're at the front line even more than GPs and we get this advice three weeks late.

“Why did it take them three weeks to come out with this statement?” askedMr Patel.

Kent local pharmaceutical committee (LPC) CEO Shilpa Shah told C+D today that pharmacies in her area had reported that it was “too difficult” to achieve social distancing.

“This pandemic has shown to us that services are the first thing that drops everywhere because you can't maintain social distancing,” she said.

“When you're handing out medication, you cannot always maintain a two-metre distance”, Ms Shah said.

While many multiples have the resources to install Perspex screens in their branches, independents might struggle to introduce them, which is why Ms Shah said the installation and costs should be paid for nationally.

Mr Patel installed some protective screens on the counters at his pharmacy. He also introduced posters reminding patients to keep at a distance from one another, which he devised in collaboration with pharmacies in his area.

A yellow line on the floor, two metres away from the counter that patients are not allowed to cross, was also introduced. However, due to patients overstepping it, the pharmacy is now using a table as a physical barrier, to help patients keep a safe distance away from the pharmacy team. 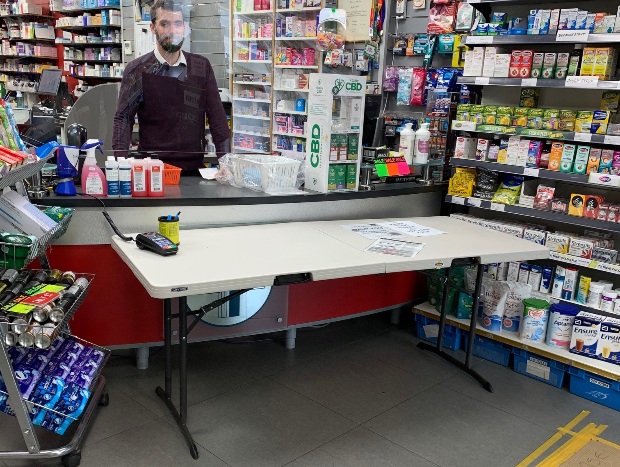 COVID-19: PDA urges government to supply PPE for pharmacy teams
27/03/2020 | 6 | News
8 Comments
Question:
What do you make of the statement on social distancing?

Good luck enforcing it in the broom cupboard dispensaries out there with no PPE.

Ahhh a GPhc specialism 'protecting the public'. Inspectors should converge en masse to make sure the 2 metre spacing is being obeyed to the letter.

Well said Kevin. This is a BIG Slap on the face for Pharmacies just after making a big thing about the Prime Minister THANKING us profusely for the INDISPENSIBEALITY of the sector.

I just hope the powers may be press it harder to make this extra cash remain extra and not a loan.

I think we've been doing social distancing for a while now.

There is a funding update regarding COVID -

NO NEW MONEY!!!!! so in other words, GPs money no object, anything you want we will pay for, Pharmacy? get stuffed, we will loan you some from the rest of the years pay,ments, get on with it....

this  is like an adjourned death sentence. the death is guaranteed but not at the moment as you are required to face the virus on the govenments' behalf. if the virus does not kill you then they will make your business unviable later in the year for sure.

Are we going to see an issue in several months time from this advance payment?