Pillbox Chemists disputed the "misrepresentative" data, and claimed the GPhC had released it "without any context"

Kamsons Pharmacy topped the results with a 100% pass rate, while Pillbox Chemists ranked last, according to the GPhC

English chain Kamsons Pharmacy topped the list of providers with 12 or more trainees who sat June’s registration exam, with 100% of its 15 students passing, according to the GPhC. Well came second, with 21 of its 24 trainees passing – 88% – and Superdrug followed with 85%.

The two largest multiples, Boots and Lloydspharmacy, had pass rates of 80% and 73% respectively.

Kamsons Pharmacy put its success down to a “holistic training programme, a love of patients and good peer support”, it told C+D.

Pillbox Chemists Ltd had lowest pass rate, with only seven of its 13 students – 54% – passing the exam, according to the GPhC data. But the company disputed the figure, and told C+D that eight students had passed, giving them a pass rate of 62%.

It criticised the GPhC for publishing the data "without any context". "A snapshot of these results is misrepresentative of the true facts of both our programme as well as pre-registration training as a whole," it said.

The GPhC told C+D it stood by the figures, which it published in response to a request from a registrant, but said it is "more than happy" to discuss them directly with the company.

Day Lewis – which came second from last with 59% – also disputed the GPhC's data.

“We take the third largest number of pre-reg students – we do not cherry pick," Mr Patel said. The company has introduced “additional coaching and support” for any students that fail the exam, he added.

Khalid Khan, pre-registration co-ordinator of Imaan Ltd – which came third from bottom with 64%* – told C+D that this year’s assessment was “flawed”, as shown by the lowest overall pass rate for five years.

“The GPhC is changing the assessment process, and it’s a step in the right direction. I’m quite optimistic for the process in the future,” he added.

In total, the 11 pharmacy businesses had an average pass rate of 75%. Community pharmacies with less than 12 trainees fared worse than the larger companies, with just 69% of pre-regs passing their registration exam, the GPhC said.

Hospital trusts did better than their community counterparts overall. Those with 12 or more trainees had a 91% average pass rate, and those with fewer than 12 had a pass rate of 90%.

See the full results in the table below. 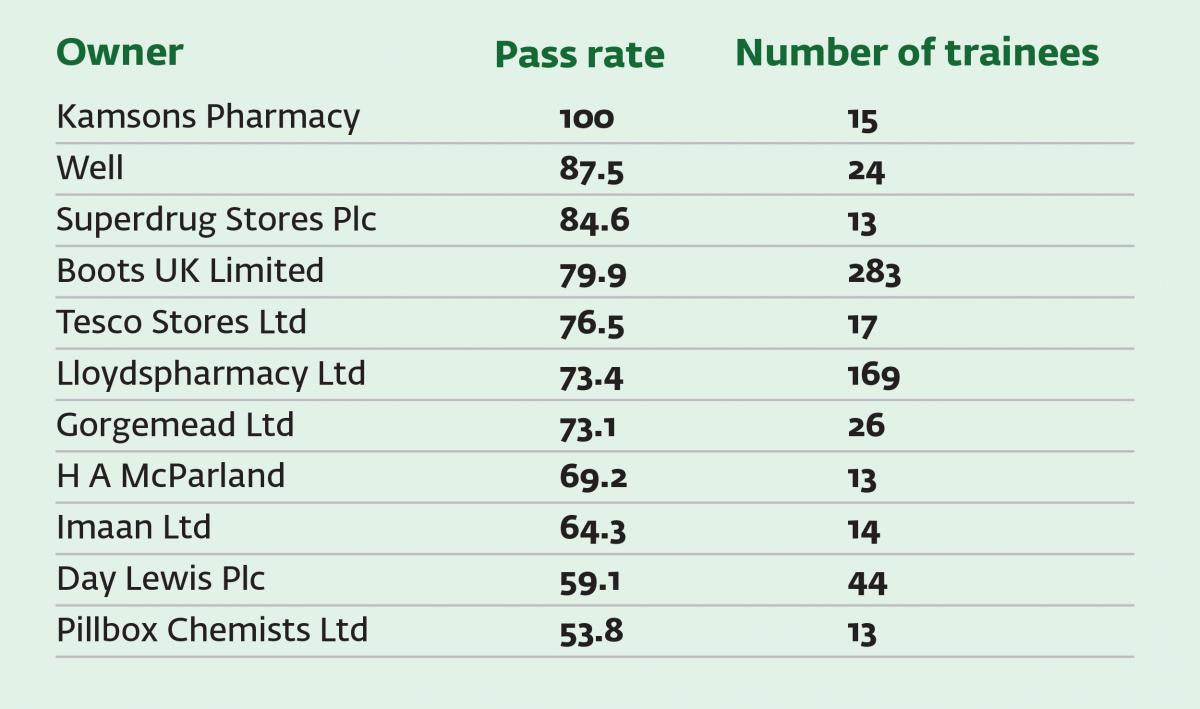 Source: The GPhC, October 15, 2015. Please note that Imaan Ltd has since provided convincing evidence to C+D to show its overall pass rate was in fact 74%, not 64%

Posted on Thu, 22/10/2015 - 10:55
These results may be skewed slightly by the fact that the larger multiples like Boots and Lloyds will have some trainees in Scotland, where most placements are via NHS Education for Scotland who provide a training programme, support to trainees and regulate hours/salary. Some chains such as Day Lewis and Pillbox, however, only operate in England where support/hours/salary/training is determined solely by the company.

Posted on Tue, 27/10/2015 - 20:33
For some reason Paydens Group is not on this list, so just for the record let me say that with 25 trainees we had 22 pass = 88%. But before I get too smug let me remind people that it is a key point to note that neither tutors nor companies can do it for students. I do not find the publishing of these figures helpful. Should I now be more selective in my recruitment for Paydens and so avoid the weaker students? Will companies reduce their number of pre reg places so as to protect their reputation?

Posted on Tue, 20/10/2015 - 13:40
I find it sad that the pressure now seems to be on tutors to get their trainees through the exam and not to engender the skills and attitudes needed to convert students into professionals. There is more than a years worth of work just in that In some ways it can be compared to learning to drive. There is a written test to see that the student has the core knowledge and the ability to apply that knowledge, not just regurgitate facts. Then the student must aquire the "operational skills" and "road sense" to be a professional pharmacist in the real world. The aquisition of those key skills has to be demonstrated. Only having done the two is the trainee ready to remove the L plates and start their real learning, the sort that never stops. By emphasising the professional development during working hours, but ensuring that the student works on their underlying knowledge in self-directed study time, we produce professional pharmacists at the end of the year, who have also passed their assessment exam.

Posted on Fri, 16/10/2015 - 23:01
Maybe the GPhC should analyse the pass rates for trainees from different countries of origin. Compare that with trainees that were born in the UK and had their all education in the UK. Primary reason is the command of English that these student have or lack of. In addition The major companies recruit well in advance and cherry pick the best of the students and hence one would expect a near 100% pas rate.

Posted on Fri, 16/10/2015 - 20:26
just admit it guys the smaller independents dont have enough resources to produce candidates who are more liklely to pass...boots and other large multiples invest much more in training material etc than indepedents who unfortunatly view pre-regs as a free member of staff.. INVEST MORE IN YOUR TRAINING PROGRAMS..SIMPLES