Keith Ridge: Transparency and medication safety will be "more on the agenda"

NHS England will analyse community pharmacy reimbursement and hospital data together “for the first time”, to reveal which medication issues are sending people to hospital.

Following on from Jeremy Hunt’s focus on tackling medicines errors in February, Dr Ridge said he and the health and social care secretary want to put “transparency…more on the agenda in terms of medication safety”.

In his keynote address at the Clinical Pharmacy Congress in London, Dr Ridge told the audience: “At some point – hopefully in the not-too-distant future, we will be commissioning some metrics around this.”

“For the first time” community pharmacy reimbursement data and “hospital episode statistics data” will be analysed together, “to see what is bringing people into hospitals, in relation to medication issues”, he explained.

The analysis will initially focus on gastrointestinal bleeds, before a “further development of a broader selection of [prescribing] indicators to develop a more comprehensive overview”, according to Dr Ridge’s slides (see below). 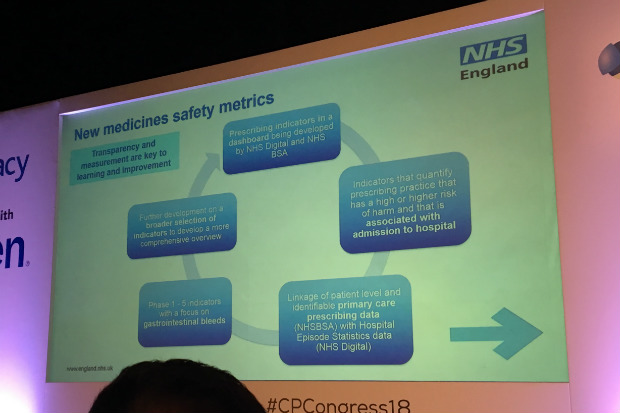 The prescribing indicators will then be displayed in a dashboard being developed by NHS Digital and the NHS Business Services Authority, and “won’t be hidden away somewhere”, Dr Ridge stressed.

Instead, it is “likely to be right in the middle of normal routine NHS statistics”, such as hospital waiting times, he added.

Only 25% of pharmacists will report more errors as defence becomes law
16/04/2018 | 2 | News
12 Comments
Question:
Do you think collating this data will be informative?

Keith Ridge is well past his sell by date and best before date. What is the connection between reimbursement and safety. Transparency yes, start with DoH with all the doggy advice it gets from unnamed sources etc

Does anyone think it is even a tiny bit ironic that the most untrustworthy and inept people and organisations like to talk about transparency, to try and make themselves look a bit more respectable? Surely anyone with an IQ over 50 can see for themselves what is going on.

Keith Ridge if you are reading this, please bare in mind no pharmacist in the community sector likes you as you have done nothing but blame community pharmacy for everything instead of supporting and innovating.

*This comment has been edited in line with C+D's community principles.*

If you are not reading this, if anyone does know him please forward this on to him.

Doubt he is reading your comment. Probably filing his expenses.

I don’t understand the link here. He’s going to analyse our payment data to see which drugs cause hospital admissions?! What a waste of money! Who thinks these silly things up? How about pay us properly so we have enough staff and less pressure, hence we are more likely not to make errors AND pick up the ones the Docs make. Simple.

Ah Mr Ridge, the inept advisor to the government. You’re a gem.

*This comment has been edited in line with C+D's community principles.*

Transparency is merely a word to people like Mr Ridge.  He can't even be transparent about his agenda even though we can read between the lines.

Honest people do not need to talk about transparency.

Maybe Dr Ridge could get the desired "transparency" from secret dossiers talking about sandwich selling? Or maybe he could ask "industry insiders?"

Is he out of his senses or this article has just given part of the message??

Keith Ridge aka the clueless one thinks community pharmacy makes medication errors which account for a huge number of incidences. Wrong.

Most of these occur in secondary care which a brain dead monkey could figure out, but no this is too much for Mr Ridge the arch enemy of community pharmacy

Whilst the industry has people like this at the helm, there will NEVER be any progress. Pharmacists, pharmacy staff and patients will all suffer.