Sid Dajani: Patients need to be charged for healthcare “at some point down the line”

Patients sometimes went to GPs for “frivolous” reasons and charging a consultation fee of as little as £1 could reduce unnecessary appointments and increase self-care, said Sid Dajani, a member of the RPS English Pharmacy Board.

Although the “corrupt” fees system was “well past its expiry date” and should be abolished, patients would need to be charged for their healthcare “at some point down the line”, he told a C+D webinar on prescription charges, sponsored by Actavis, on Monday (March 23). The RPS is a member of the Prescription Charges Coalition, which campaigns to abolish script fees for patients with long-term conditions.

A poll conducted by C+D showed that 17 per cent of readers agreed with Mr Dajani that charging for GP consultations was the best way for the NHS to solve its funding problems (see graph below). 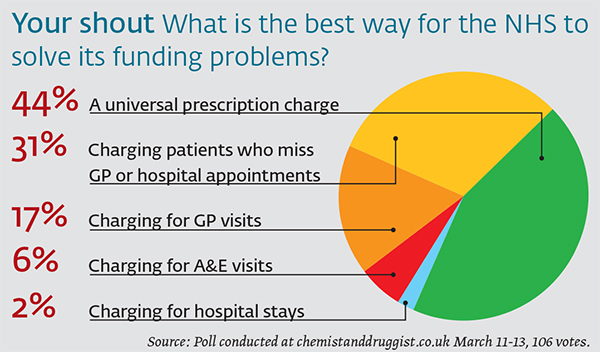 Forty-four per cent of 106 respondents to the poll, which ran from March 11 to 13, backed a universal prescription charge, while 31 per cent supported charging patients who missed a GP or hospital appointment.

But Tania Francis, partner at health and social care law firm Hempsons, questioned imposing a fee for GP visits. “Why would it be less harmful to pay for a consultation rather than medicines? Is this not just moving the barrier for those who can’t afford to [pay] one step before [a pharmacy]?” she told the webinar.

NPA board member and contractor Nick Kaye said he was also unconvinced by the argument for charging for appointments. The NHS could save money and reduce hospital stays by ensuring patients had better access to the right medication once prescription charges were abolished, he argued.

Fellow delegate and Numark pharmacy services director Mimi Lau called on pharmacists to lobby politicians to overturn the "archaic" prescription charges system. However, she admitted there may be little “political appetite” to do so in the run-up to May’s general election.

How else could the NHS save money?

Posted on Mon, 30/03/2015 - 23:43
An interesting debate but can I just point out that this is not an RPS view and Sid is speaking in his own right, i have views on all sorts of things including FGM, global warming, who should be shot come the revolution but this does not make them an RPS view and it is lazy journalism to make this sort of link!

Posted on Thu, 23/04/2015 - 06:43
Hi Sandra, the RPS as part of the Precription Charge Coalition is to scrap Rx charges. My take was giving examples of what to replace it with which potentially could be a much smaller blanket fee or charging for frivolous GP consultations. I also said as a practicing CP what I'd do if there was a dispute between a patient and what the proposed e-exemption system said.

Posted on Sun, 29/03/2015 - 17:00
I guess if you have shedloads of money you can afford to pay to see your GP. Unfortunately most people don't have the money to do so. All this shows is how divorced from the real world some people actually are. I guess that he doesn't realise that if you charge to see a GP then people will go straight to the already overworked free out of hours clinics and A&E instead. GPs are the gatekeepers to the NHS. If you have a charge to see a GP then you are removing people's access to the health service. And the people that you will be hurting the most are the ones who most need to see a GP. As for the idea that payment should come from a work based insurance scheme! This misses the target because it is generally not the workers who are taking medication or seeing GPs, as they are fit for work. It's the old and the young and the too sick for work who need the care. Gerry Diamond wants to tax the fit and healthy to pay for the sick. That's what we pay NI contributions for. Would you have everyone who works paying twice over?

Posted on Sun, 29/03/2015 - 19:48
National Insurance only goes to pay for current over 65 years pensions not for the future either. If we want a better NHS then sadly we are going to have to pay more for it out our own pockets. Politicians are scared to say but it will be more tax one way or another. That said the NHS system at present is completely not fit for purpose, and UK needs to start looking at other model e.g. in Holland they have piloted a flat structured healthcare service where nurses work in teams no administrators and they deliver care and organise their own work unencumbered by managers or protocols.

Posted on Thu, 26/03/2015 - 20:52
Easy peasy! State Health Insurance Plan out of everyone's wage pay each month to fund GP and hospital care. Scrap NHS prescriptions via a drug insurance plan privately or as an employee benefit, give tax reduction for those paying for their plans or drugs privately. Give those over 60 and on welfare free prescriptions. Everyone else pays for their own medication.
Posted on Thu, 26/03/2015 - 20:09
Great idea Sid and whilst you're at it, why not campaign for victims of repeated crime to have to pay premium rate phone charges to dial 999 to get the Police - that'll make em think twice about moaning when their car gets vandalised again. I heard that the RPS was moving premises but I didn't realise it was onto another planet

Posted on Thu, 26/03/2015 - 23:55
I was suggesting looking at spreading the tax collection burden as an option like we have with dentists and optometrists, I also suggested charging for missed appts or charging a much lower universal blanket charge. I also said that Impact Assessments would need to be done. Frankly anything else is better than what we have now unless you can make sense of why or think it fair asthmatics pay but diabetics don't, that English patients are liable but not the Scots or Welsh or that lower income earners are worse off than those with no work... I could go on about inequality, discrimination and impaired patient care but I'll spare that for another time :0)

Posted on Fri, 27/03/2015 - 08:41
Good points for the sake of arguments. But, why are we shifting our focus from a universal charge on prescription items. Even a 50p charge per item exceeds the current Govt. target of recovering the fee and it wont be a burden on anyone. We can still maintain the age exemptions and the Govt. can support those on benefits. The more we dilute our approach to this topic the more it would get out of our hands. Why not all the leaders/ bodies join hands on this issue and issue a single joint statement and follow up with patient campaigns ??

Posted on Thu, 26/03/2015 - 17:22
Sometimes I wonder, every time there is news of extra funds being injected in to NHS, all of a sudden the GPs come front to claim they are the guardians of health and all they do is care for patients and welcome all the new services to be commissioned through them. But, whenever some talks about cuts and things like policing prescriptions charges, the GPs have no time in hand at all and recommend the Pharmacy sector as the most suitable place. Unless this attitude is addressed there is no point of suggesting anything towards GPs.

Posted on Thu, 26/03/2015 - 17:15
I am sorry, but I cannot agree with the two commenters below. I work in a system where everyone pays for the GP and A+E and guess what, scores of people are not dropping like flies! They do come to the pharmacy a lot more and you use your skills to treat or refer. If you think that there should not be charge for GP appointments, read this; http://www.resilientgp.org/inappropriate-demands/
Posted on Thu, 26/03/2015 - 16:53
I'm struggling to find the words to express my dismay at this.

Posted on Thu, 26/03/2015 - 16:47
Charging for GP visits would be disastrous for people's health. Patients would be less likely to see the doctor unless they were critically ill, at which point it could already be too late considering a variety of diseases are symptomless. What about that random mole that popped up? I don't want to have to pay for a doctor, so I'll leave it - turns out to be a melanoma. Sid Dajani hasn't thought this through at all in my humble opinion. I sound like a broken record, but scrapping exemptions with the exception of age related and normalising the figure amongst the 35% to a flat fee of £3 can be mathematically proven to earn the NHS an additional £70,000,000 a year. Long term meds? Prepayment Certificates at the same ratio as current reflecting the flat fee would cost a patient £36 for a year or £3 a month.

Posted on Thu, 23/04/2015 - 06:36
Yep but it doesn't stop it happening or stop the prescription tax increasing above inflation year on year. It needs to be fair and equitable. Either spread the load or ban it.

Posted on Thu, 26/03/2015 - 14:59
some frivilous visits are the early signs of dementia or a chance to catch cancer early let the public have access to the GP . Perhaps we should stop the GPs spending so much time in CCG meetings/nhs meetings,comissioning groups and othe finance based meetings we suffer from thousands upon thousands of pounds wasted on drugs that are returned to pharnacies due to over prescribing in my area due to the 84 /126 and more day scripts ,whilst other doctors refuse to use repeat dispensing because some pharmacies re-order for patients every month using an SOP that says they ask at pick up what they want next time rather than call them before ordering we have so many thing to put right before we charge for access to medical care , perhaps all patients that pay for scripts should be introduceed to prepayments ,perhaps grandma that orders paracetamoll each month for the family should be made aware of the cost to the NHS