Inadvertent dispensing errors will not be decriminalised until Northern Ireland has a functioning devolved government, the Department of Health’s (DH) head of pharmacy has said.

There are “just two steps to go” (see image below) before the creation of a legal defence for pharmacists and their staff from criminal prosecution for inadvertent dispensing errors, Jeannette Howe told delegates at the Association of Pharmacy Technicians UK's conference in Cardiff yesterday (July 3). 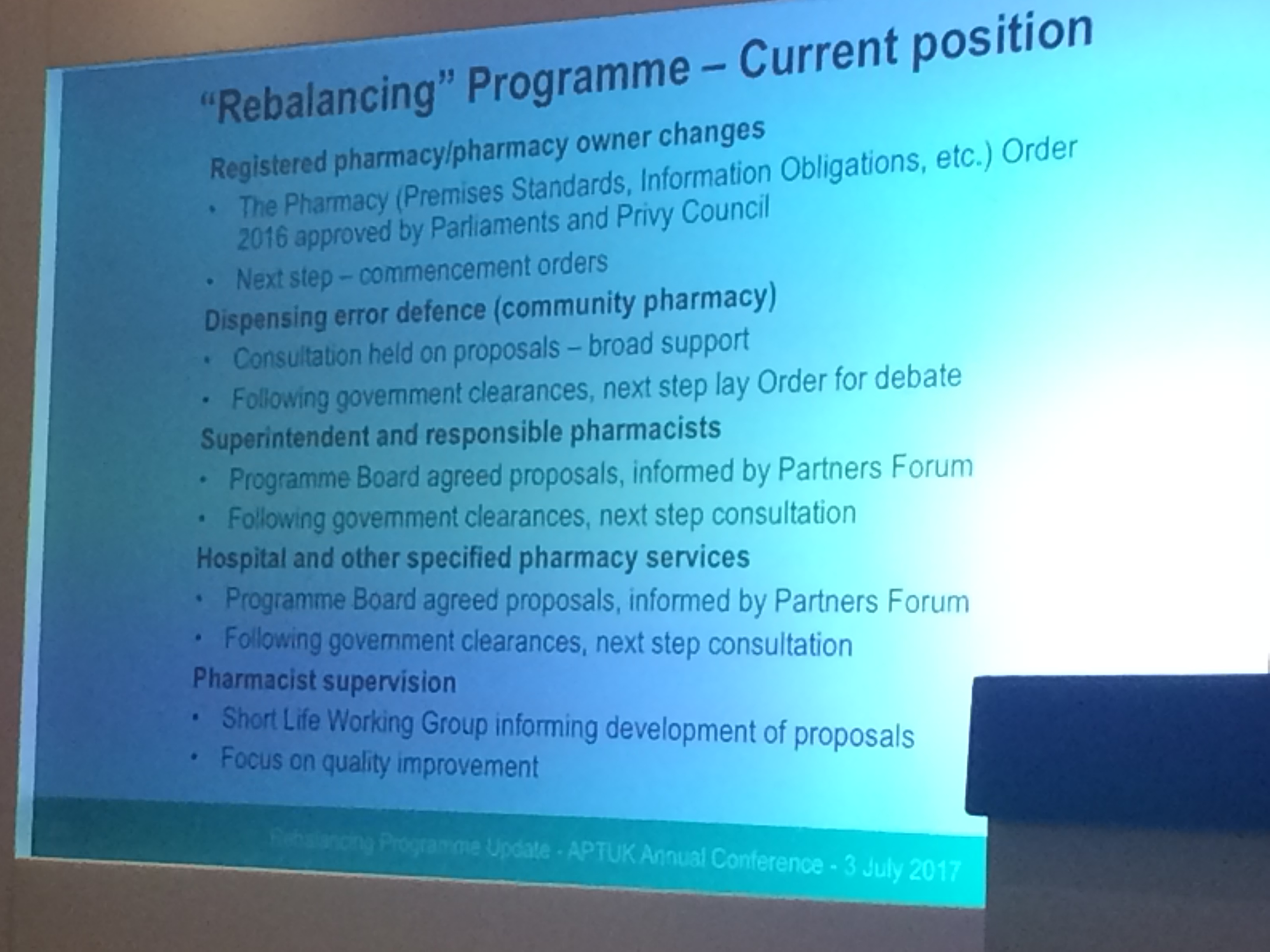 However, “in order to do that, you need a functioning government”, Ms Howe stressed.

“We have been somewhat affected this year by a Brexit referendum, the unfortunate situation in Northern Ireland – where they don’t have a functioning government – and then the general election.

“Until we have a government in all four countries, we can’t take this forward,” she added.

This afternoon, the BBC reported that a deal to restore a power-sharing government in Northern Ireland is not expected “before the end of summer”.

The DH board overseeing the move towards the decriminalisation of dispensing errors is “ready to go”, once it gets the “necessary government clearances” to lay down an order that can be debated in parliament and “hopefully, successfully bring about change”, Ms Howe told the conference. 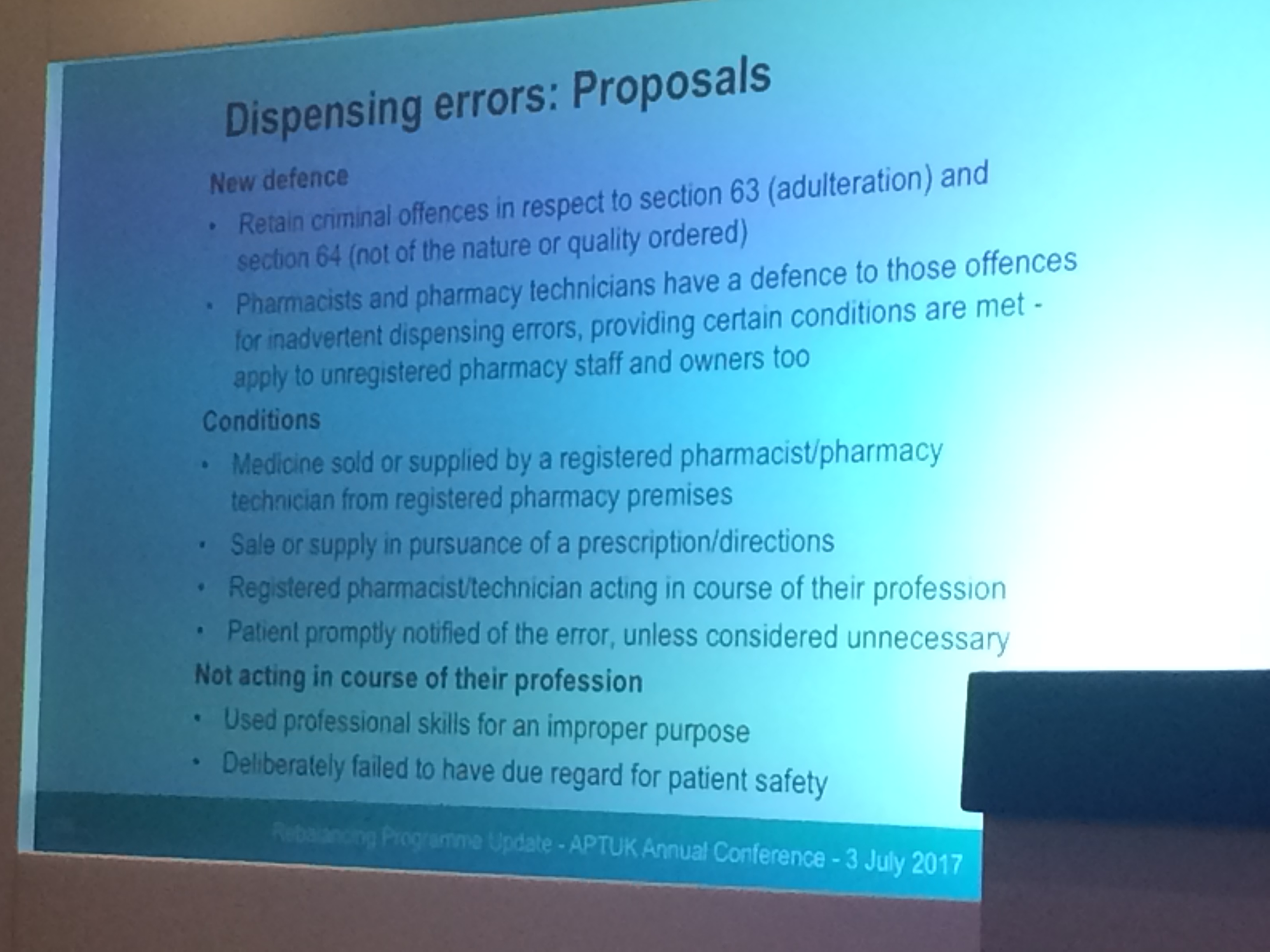 Ms Howe recognised that dispensing errors are “an area of great concern to both pharmacists and pharmacy technicians”, but stressed that pharmacy professionals have a role to play in “actively reporting and learning from incidents”.

As part of the board’s consultation on dispensing errors, it held focus groups with “patient and public representatives” in each UK country, she explained.

“They were very supportive of the defence [from] criminal offence on dispensing errors, provided that the reporting and learning activity increased as part of the deal,” she added.

“People look to pharmacy regulators to be responsible for regulation,” but the “four layers of regulation” – patients; individual pharmacy professionals; pharmacy teams; and regulators – have to work together to ensure “safe and effective pharmacy practice”, Ms Howe said.

“My message here is really that the DH, me and my team, have work to do to bring about these changes to legislation,” she told delegates. “But so do you.”

In February, Ken Jarrold – the head of the board tasked with “rebalancing” medicines legislation – responded to C+D editor James Waldron’s open letter calling for a timeframe for the decriminalisation of dispensing errors. Read Mr Jarrold’s full response here.

In May, Jeannette Howe was ranked number six by readers in C+D's list of the 50 most influential people in community pharmacy. See the full Pharmacy 50 here

Just give them another billion pounds and they will agree

Political nonsense, I've heard it all before. Tony Blair can decide overnight to attack Iraq and Afghanistan, David Cameron can decide overnight to bomb Libya etc, it seems where a decision is more likely to lead to injury and fatality will be made immediately without due thought or any consideration, by one person. Yet a decision that is very likely to improve healthcare and bring pharmacy in line with doctors, not only requires a functioning government in England, but also a government in a totally different country. This is the result of zero leadership in pharmacy and a pro-multiple head of the GPhC. I'm more likely to witness a total and simultaneous inter-galactic eclipse.

Is the first step to have someone important give a shit?

Nobody needs their passport photo signing these days and now it's looking like Pharmacists soon won't even be able to consider themselves outlaws.  This profession sucks.   On the bright side we'll all be able to check boxes much quicker and have more time for MURs :)

Dead right, I saw recently that somebody managed 360 MURs in a month, conveniently just before the april cut off point. Fantastic timing I must say.

Ben Merriman makes pertinent points about the nitty grity of the matter at stake.

Whilst I agree with Ms Howe that pharmacy teams are the key stakeholders in reducing dispensing errors, the fact of the matter is that massively increased dispensing workload in the last ten years means unfortunately, inadvertent dispensing errors are going to be inevitable, sooner or later, by the law of averages. No matter, I and the pharmacy teams I work with strive to do our best for our patients, day in, day out - often in trying situations and circumstances.

The DH's drastic reduction in community pharmacy funding has not helped matters or morale at all. Until quite reently, I had been working with a well-known small multiple, but with less and less supporting staff as a direct result.

So it does change how one practices the "artem secudum" of pharmacy - ie a lot more cautiously and defensively. Meaning longer prescription waiting times [which no one wants, nor likes] whilst weaving the advanced and enhanced services in-between.

But it is curious that Ms Howe uses the political stalement in Northern Ireland as yet another excuse for the ongoing delay in dispensing error decriminalisation.

Oh the subterfuge of seasoned politicos who are supposed to be on "our side".

There are already differences between laws in Northern Ireland and Scotland (with the latter having a completely different legal system) and in England and Wales.  Of course my colleagues in Northern Ireland should have the same right to work without fear of criminal proceedings but should everyone in Scotland, England and Wales have to wait for politicians to have sorted themselves out for the same priviledge?  Surely anything implemented in Great Britain could simply be transferred across to Northern Ireland once they had a functioning assembly (strong and stable or otherwise)