Learn more about the medicines that interact with the body's enzymes

In this module you will learn:

There are various roles for enzymes in the body. Digestive enzymes help break down food to use for nourishment, while metabolic enzymes are involved in the metabolism of various molecules, including drugs.

The pharmacological effect of a drug is partly dependent upon its concentration at its site of action. This is influenced by the drug's removal from the body which is, in turn, affected by the metabolism of the drug by the body’s enzymes.

Cytochrome P450 (CYP450) enzymes are essential for the metabolism of many drugs. Their function is to remove potentially toxic compounds, as well as endogenous substances like bilirubin, from the body. There are over 50 of these enzymes, but just six metabolise 90% of drugs. The two most significant of these are CYP3A4 and CYP2D6.

The following seven case studies focus on the inducers and inhibitors of the cytochrome P450 enzymes.

Mrs Evans has come into the pharmacy for emergency contraception and informs you that she currently takes Tegretol M/R for her epilepsy, at a dose of 400mg twice daily.

Should you supply her with Levonelle One Step at a single dose of 1.5mg?

Levonelle One Step contains levonorgestrel. Tegretol – active ingredient carbamazepine – is an enzyme inducer of the CYP3A4 system and induces the enzymes that metabolise levonorgestrel. This significantly reduces the effectiveness of this contraceptive medication.

The best option to prevent pregnancy in this situation is to fit an emergency copper-coil intra-uterine device. It can be fitted up to 120 hours after unprotected intercourse or within five days of expected ovulation.

However, this is not always suitable, or preferred, by the patient and emergency hormonal contraception (EHC) may be needed. The Faculty of Sexual and Reproductive Healthcare (FSRH) recommends that two 1.5mg tablets of levonorgestrel should be taken if a patient is using a CYP3A4 inhibiter. This is outside the product license, but not the POM license.

This is still the case if EHC is required within 28 days of stopping an enzyme-inducing drug. The Medicines and Healthcare products Regulatory Agency (MHRA) released a statement in September 2016 for patients taking enzyme inducers and requiring EHC which emphasised this advice.

As you cannot sell a double dose of Levonelle One Step, it would be prudent to recommend that Mrs Evans visits her GP as soon as possible for either the coil or the higher dose of levonorgestrel.

Miss Denny is taking Neoral (ciclosporin) for her psoriasis, and it is currently working well. However, she now has a fungal skin infection, for which fluconazole has been prescribed.

Is fluconazole the most appropriate treatment option?

Fluconazole is a triazole antifungal which inhibits enzymes of the CYP450 group. It is a potent CYP2C9 inhibitor, a moderate CYP3A4 inhibitor, and also inhibits CYP2C19. This means it significantly increases the concentration of ciclosporin that is metabolised through these pathways.

If fluconazole was taken, it would result in a greater degree of immunosuppression than desired. There is also evidence that fluconazole appears to inhibit ciclosporin metabolism in the gut wall – which could have an additive effect. Therefore, fluconazole is not a suitable treatment option for Miss Denny.

Topical treatments are an option, but an oral agent may be preferred if the infection is widespread. Of the oral antifungal agents available, terbinafine would be the safest.

The British National Formulary (BNF) notes that ciclosporin levels may possibly be reduced by terbinafine. The summary of product characteristics (SPC) also notes this interaction, but does not detail its significance. However, Stockley's Drug Interactions states that there is usually no clinically relevant effect of terbinafine on ciclosporin levels.

Miss Denny then explains that she has been feeling low recently, and her friend told her about St. John's wort, which she is keen to try.

Is it appropriate to sell this OTC product to Miss Denny?

Hypericum perforatum, otherwise known as St. John's wort, is a CYP450 inducer and is therefore contra-indicated with ciclosporin, due to the risk of decreasing levels of the immunosuppressant in the blood.

Although there is a greater significance for transplant patients – where a reduction in levels could result in organ rejection if the two drugs were to be used concomitantly – there is still a risk that Miss Denny’s psoriasis control would be reduced. 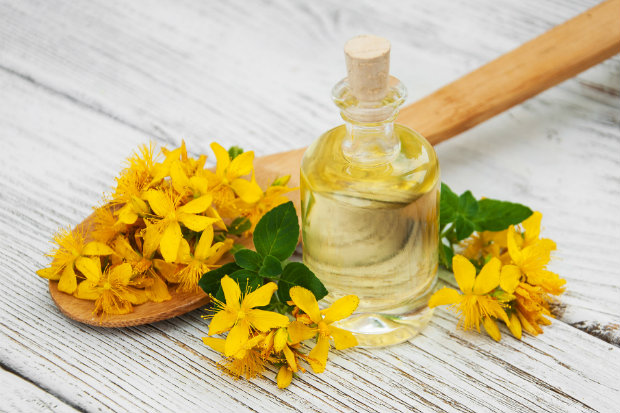 The effect of St. John's wort cannot easily be predicted, as it has variable action on CYP450 enzyme induction depending on the quantity and quality of the active ingredient in each product.

You should therefore advise Miss Denny to speak to her GP to discuss her low mood and treatment options.

Mr Taggart visits you with a prescription for erythromycin 500mg tablets, one to be taken four times daily, for an acute exacerbation of chronic bronchitis. The patient medication record (PMR) shows that he also takes Tegretol M/R 400mg tablets in the morning and 600mg at night.

Is this the most appropriate antibiotic for Mr Taggart?

Erythromycin is a CYP450 inhibitor and, as such, increases the plasma concentration of carbamazepine. This can increase the risk of adverse reactions, such as:

The SPC advises that the Tegretol dose requires adjustment when taken with a CYP450 inhibitor and that blood levels should be monitored.

However, it would be more appropriate to recommend an alternative antibiotic that does not have the same interaction. For example, you could speak to Mr Taggart’s doctor and suggest the patient takes amoxicillin or a tetracycline as an alternative.

Miss Walsh has a urinary tract infection (UTI) and her GP has prescribed ciprofloxacin 500mg twice daily for three days. When you look at the PMR, you see she takes Slo-Phyllin 250mg twice daily, and uses a Flixotide 500mcg evohaler twice daily for her asthma.

Is this antibiotic appropriate?

Ciprofloxacin is a fluoroquinolone antibiotic and inhibits CYP450 1A2 – the enzyme responsible for metabolising theophylline. As a result, it may increase the concentration of theophylline in the blood. As it has a narrow therapeutic window, this interaction could result in potentially fatal theophylline-induced side-effects.

Antibiotic prescribing guidelines do not recommend ciprofloxacin as a first-line UTI treatment.

Therefore, it would not be an appropriate choice of antibiotic. Nitrofurantoin does not have this interaction, and would be a more suitable antibiotic choice to recommend to the prescriber.

Mrs Bennet is just finishing a course of Rifinah to treat her tuberculosis (TB). She is also prescribed methadone 1mg/ml oral solution for drug addiction treatment and has been stable on her current dose.

Can Mrs Bennet continue on the same dose of methadone as she finishes TB treatment?

Methadone is metabolised by CYP3A4, therefore co-administration with rifampicin causes a reduction in methadone blood levels, and a higher methadone dose will be required to achieve the same effect.

However, the competing effects of rifampicin and isoniazid are unknown. Care needs to be taken when Rifinah is discontinued, as it is possible that Mrs Bennet will have been taking a much higher methadone dose than she requires – resulting in an overdose.

It is therefore very likely that Mrs Bennet will require an adjustment in her methadone dose as her Rifinah dose is reduced.

Mr Hardy has epilepsy and his current dose of Epilim is 500mg twice daily. He has not had a seizure for some time. Recently he has been experiencing periods of depression and was started on mirtazapine 15mg daily. However, he is finding the associated drowsiness a problem.

As fluoxetine is known to have a less sedating effect, would it be a suitable alternative to his current antidepressant?

Although fluoxetine has less of a sedating side-effect profile, it does antagonise the anticonvulsant effects of Epilim (sodium valproate), as it inhibits enzyme CYP2D6. Stockley's explains that incidence reports have indicated fluoxetine can alter – by increasing or decreasing – sodium valproate levels.

This mechanism is not understood and Stockley's states that concurrent dosing does not necessarily need to be avoided. However, if fluoxetine is used, the patient should be monitored for signs and symptoms of toxicity, such as nausea, vomiting and dizziness.

Mr Stevenson, who suffers from seizures, has been stable on a phenytoin dose of 300mg once daily for over a year.  However, he has recently been experiencing periods of heartburn. When you ask him more about this, you find there are no red-flag symptoms.

He has tried OTC antacids in the past, but did not like them. Instead, he has seen Nexium tablets advertised and wants to know if they would be suitable.

Is this an appropriate choice of OTC treatment?

Phenytoin is metabolised by CYP450 enzymes, specifically CYP2C9 and CYP2C19. If these enzymes are inhibited, it can cause significant changes in the concentration of phenytoin, along with the associated risk of toxicity.

Esomeprazole is a CYP2C19 inhibitor and may increase phenytoin levels. Phenytoin has a narrow therapeutic range and therefore small changes in phenytoin dose or metabolism can result in large changes to plasma levels and phenytoin toxicity. Symptoms include:

Pantoprazole is metabolised by the CYP450 system, mainly due to demethylation by CYP2C19. However, research suggests there are no effects on the levels of phenytoin when co-administered with pantoprazole.

If Mr Stevenson specifically wants to try an OTC proton pump inhibitor, he could try a short course of Pantoloc Control 20mg tablets – the OTC licensed version of pantoprazole. If he needs to continue this treatment long term, you should advise him to consult his GP.

In addition, lansoprazole does not interact with CYP2C19 enzymes either and can be prescribed, but not sold – as there is no OTC version available.

Reflect Can emergency hormonal contraception (EHC) be used in women who are taking antiepileptics? Which antibiotics are suitable for use in patients taking theophylline? How do rifampicin and isoniazid affect the metabolism of methadone?

Plan This article discusses the interactions of drugs that are inducers or inhibitors of the cytochrome P450 enzyme system, using a case study format. Information about interactions concerning antiepileptics, hormonal contraceptives, immunosuppressants, antibiotics and antifungals – as well as St John's wort and proton pump inhibitors – is included.

Find out more about St John's wort and its interactions from the Patient website here.

Evaluate Are you now confident in your knowledge of drugs that affect CYP450 enzymes? Could you give advice about possible interactions to patients who are taking these drugs?