The average hourly pay rate for locum pharmacists across the UK has increased slightly for the first time in 10 years – by 34p, according to the C+D Salary Survey 2017.

The average hourly rate of 275 locum pharmacists who completed this year's Salary Survey – which ran throughout October 2017 – was £20.84, an increase of 34p-per-hour on the average for 2015. 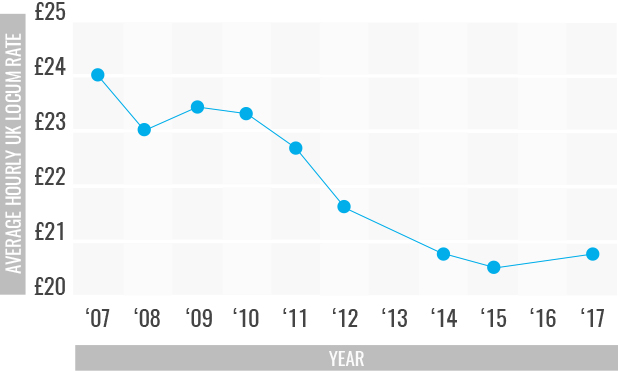 The biggest rate increase – of £2.90 – was seen in Northern Ireland. Despite this, the country still trailed behind the rest of the UK, with locums paid just £16.57-per-hour on average, compared with £19.79 in the next lowest region, London.

In contrast, the biggest drops in average rates were seen in Scotland and Wales, of 94p and £1 respectively (see map below).

C+D’s Salary Survey also found that two-thirds of locums are dissatisfied with their rates. Pharmacists from London and south-west England were the least content – with over 75% of respondents from both regions dissatisfied.

Almost half (47%) of dissatisfied locums across the UK blamed their employer for their unsatisfactory rates. A quarter believed their rates are the result of insufficient pharmacy funding from the Department of Health (DH), with one locum claiming the DH in England “has no vision of community pharmacy”.

Another respondent suggested universities “start courses for their financial gain only, regardless of need or quality” – creating a surplus of pharmacists which in turn lowers locum rates. Meanwhile, several respondents placed blame on “other locums accepting lower rates”.

You can read C+D clinical editor Kristoffer Stewart's thoughts on why locum rates rose in 2017 here.

Negotiating locum rates: please can we have some more?
20/07/2017 | 10 | Features
22 Comments
Question:
Why do you think the fall in locum rates has levelled off?

subtract the hour it takes to travel there and hour back ...subtract the hour lunch where they shift you to some dinky room and continue taking in prescriptions for wen you come back ---subtract the fuel money you no longer get paid ...

Great news, now locums can see what can happen if you legally and ethically negotiate, hopefully more will ask for better rates.

I think we are being a bit unfair. The article only states that the endless slide has finally stopped. It was not saying the situation was good.

This is a non-story, doing a quick estimate off the graph and adjusting for inflation....

Nope it's not a real increase

We all know but C&D still try and sell this nonsense on behalf of the multiples.

34p increase and we are supposed to view this as a success? for what exactly? and the c and d contradicts itself in another article by saying locum jobs are harder to come by. i will put the non alcoholic champagne on hold thanks!

The NHS is not just heading for but it's in a staffing crisis. Shortages of nurses, paramedics and physios. Here's a suggestion Mr Ridge. Use some of the millions you have cut from community pharmacy to fast-track 10,000 pharmacists as independent prescribers. Then use them. Pay the course fees, pay an honorarium and you will be bombarded with recruits. Pharmacists who are desperate for a job with a future and rewarding too. Seems like a win:win to me. So what's stopping you?

UK inflation rates rising at approx 2-3% per year since 2007, cummulatively approx 25% overall? Seriously decreases the purchasing power of these locums

Increase by 34p?! You can’t even buy snickers with that! Lowest Locum rates are definitely with independents. Boots used to pay Locums well in North Yorkshire, but over the last year work has declined to almost nil due to them employing cheap reliefs at £17-19ph.

I don't think you can use the toilet at main railway stations for that price either...

In other words, it isn't even a piddling increase!

Congratulations to all the regional locum cooperative groups and members on telegram.
We're putting up a resistance to poor shifts and saying NO.
Keep up the good work.

Yeh and blocking those who hv different views to yourself

hear hear, the messages on these groups is very self congratulory as if they have achieved this piddling increase themself. lol

Well, would you not do the same?

If you are a young pharmacist best get yourself into another job. One that will not be replaced by robotics.  For example, Indeed website lists nursing jobs...

Birmingham
Jhoots £16
Lloyds £19-£20
Independants £16-£20
Can anyone from Birmingham mention current boots rate? I never worked for them.

Some of the TESCO rates are £18 hr !!! Disgrace ...plz boycott. Only company I know that leaves Locum alone after 8pm with no support staff even if it’s their first shift....

Boots do that too!