Boris Johnson visited a community pharmacy in his Uxbridge and South Ruislip constituency to learn how the sector can ease pressure on other NHS services.

“It was a fantastic opportunity for community pharmacy to show the Prime Minister what [the sector's] provision is all about. It was very generous of him to give up his busy time to come and listen to what we do in community pharmacy,” she told C+D yesterday (January 20).

Ms Hannbeck, who invited the Prime Minister “to show him what value pharmacy can add”, said Mr Johnson was particularly interested in understanding how the sector can alleviate pressure on other NHS services.

“We highlighted how, when recognised and valued, we can as a sector help lift the burden on A&Es and GPs who are under pressure, supporting the government's agenda.”

Ms Hannbeck said she also made the Prime Minister aware of the value community pharmacy can add to the government’s prevention agenda.

“With the right support and funding, we can do hypertension and atrial fibrillation, diabetes monitoring, we can [keep] people from misusing opioids… all of these things are a hot topic for the government, [and pharmacy] can be a solution,” she said.

Mr Johnson asked Ms Hannbeck why people “end up rushing to A&E” instead of choosing to visit their local pharmacy first, she said.

The Prime Minister agreed to take this conversation forward, in a bid to “inform people on what pharmacy can do”, Ms Hannbeck said. “With the right support and means, we will be able to help, so people don't end up going to A&E unnecessarily.

“He later retweeted my tweet about his visit, which I thought was a very nice gesture,” she added.

“There needs to be movement, which needs to start by getting politicians behind us so that they can see what we do. [It will then become] much easier to start changing the public perception,” Ms Hannbeck told C+D. 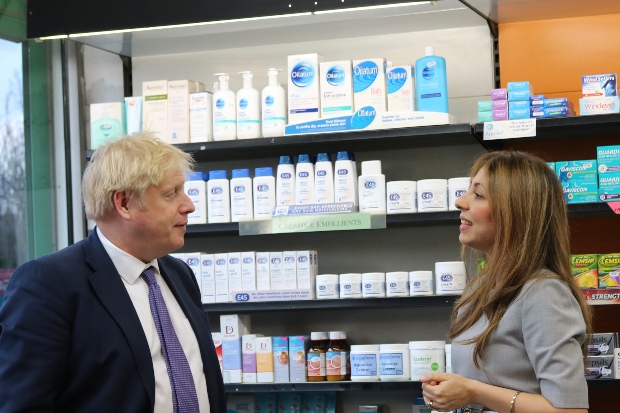 During his visit, Mr Johnson took interest in the services offered by the McParland Pharmacy branch, said Ms Hannbeck. She highlighted how many Community Pharmacist Consultation Service (CPCS) referrals the pharmacy had completed and gave him an update on the number of flu vaccinations it had administered.

“He was very impressed, and said: ‘Wow, you're doing all of these things’,” she told C+D.

Corrin McParland, owner of the McParland Pharmacy chain, said: “It was a pleasure for our pharmacy to have the visit by the PM.

“By visiting our pharmacy, he saw the pharmacy teams’ good work in action and heard from our patients how valuable pharmacy services are to them”.

In a statement after the visit, Mr Johnson said it was “a real pleasure” to meet Ms Hannbeck and Mr McParland “to learn more about the important work of community pharmacies in helping to keep local people fit and healthy”.

“We discussed how the pharmacy’s involvement in the consultation service has already benefitted a number of my constituents. This has helped relieve pressure on GPs and A&E departments, as well as giving people the treatment they need as quickly and as close to home as possible,” he added.

We have heard lots of praise over the years. I want to see the colour of his money!

Then maybe you will be pleasantly surprised about the news article in October when he visited a Pharmacy in Watford after he pledged to make prescriptions free?

Leon, the 'most pleasant' surprise for most Brits was on Dec 12th 2019 at 10pm when the Exit poll said Conservative majority of over 80 !  And the next Labour prime-minister may not have even been elected yet. (c.f. Tories in 1997. Cameron elected to Witney in 2001.)

Obviously they're not perfect, but anyone who voted for two deluded, clapped out old Marxists who count terrorists as their 'friends' and didn't have a magic money tree, but it seemed, an entire forest, needs to read a history book of the 1970s and/or seek psychiatric help.

As former Labour MPs like Caroline Flint said, Corbyn was toxic on the door-steps. Pity she lost Don Valley, I could have seen her running for Leader.

(Ah yes, free scripts, that old chestnut, so where is the near half a billion per annum in England coming from for that? Mute point now).

In regards to Free Prescriptions, I personally support Universal Fees. Doing the mathematics behind it shows it's far cheaper to administrate, reducing expenses and can be easily costed at about 80p per item for a slight gain in income.

I'd respect your opinion on the topic.

Angela, in reality, conservatives did win with a share of 43.6% with 33% of the country's registered voters not voting. Only gaining 300,000 more votes than the 2017 election.

This shows that Conservates are about the same popularity than before. Labour, of course, had a very bad showing, losing along the lines of 2.7 million votes.

Then, of course, we can go onto talking about the weaknesses of FPTP voting systems, and why most countries have moved away from it. Lib Dems had 300% more votes than the SNP, but only 25% of their seats in comparison.

However, I digress - I meanly sought to correct Cyst's incorrect assertion that Corbyn had never visited a Pharmacy, when this was very blatantly, not true.

If you look at places like Germany and most places with PR, they have loosely held together coalitions that cannot get anything done. Spain and Italy in particular seem to have problems and in Austria you even have the Greens helping hold up a loose coalition, "so no I don't like coalitions" as Meryl says in the film 'The Iron Lady' as Lady Thatcher.

FPTP removes this problem, although I do accept your point on the LD vs. the SNP.

I actually believe in 25-50 yrs time Scotland will be an independent country, perhaps even NI will leave the UK. This of course, creates problems for Labour as they cannot win a majority without Scottish seats, and then of course we move towards a One-party state system, which, although leaning towards the Tories, I find is not good for democracy.

Regarding your point on non-voters, of around 14 million adults, I have no interest in bringing that figure into play, like they tried with the EU referendum. To me, they have actually 'voted' by not voting in saying 'we don't care' who wins. You have to go and put an X in a box in a polling station not that far from your house in most cases, usually the local school, or town/village hall.  It isn't difficult, and although recent years have been unusual, most GEs are every 4 to 5 yrs. You don't have to write a 1000 word essay on why you would like 'Mr. Bloggs' to represent you in Parliament, so my opinion is, they are in effect 'voting' and like I say to people who don't vote in even a GE, don't moan afterwards.

There was a wonderful story in the MailApp comments on a neighbour saying next door's daughter had gone on a protest march to London about the EU referendum result, and had done the same after the 2015 election, even though her Mother said, the girl hadn't voted in either! And I do agree with the neighbour when you're trying not to laugh and even the mother is rolling her eyes at the daftness of a 20 yr old Uni student.

He would be just as useless. I'm not sure what the point is.

A photo op with a proven liar who can't even answer the simple question 'how many children do you have'. I'll pass thanks.

The problem being naturally that the importance of pharmacy isn't being understated, it's just that it wants to be done more efficiently. When there are technologies available that can do the same job as a whole team, faster and more accurately than it makes sense.

Unless we are talking about public perception; that's through the floor.

I wonder when he'll visit a pharmacy in Scotland to see how the Scottish Government supports the community pharmacy network?

Your attempts are futile. Pharmacy will be given no funding. We will be given these useless cpcs frameworks and funny PCN titles until the day they tell us there is more funding cuts. I qualified in 2014- been working since and im sad to say I'm leaving the profession I once respected. Society sees us as box Packers. I see us as the same. No frame work will change it.

I'm sure many on here would agree you are making the right decision if you are in your 20s/early-mid 30s.

Pharmacy struck the iceberg many years ago and has been taking on water ever since.

The 2020s will be the defining decade I think, where community pharmacy splits and become box packers in script factories, like Mcdonalds but with tablets, and Amazon style too with hub and spoke.....or you will become a 'clinical pharmacist' and work in a GP surgery. You really only have to look at the money trail.

Don't be sad, there are many more less stressful ways to earn 30-40k a yr. If you enjoy retail, I know one person toying with the idea of the Aldi Manager graduate training scheme. Yes, they work you bloody hard, but the money is allegedly great, and a car too !

I agree with you D.

It's clear from documentation like the Five Year Forward View, that they don't want Pharmacy to be in its current form.

Did you ask him to reverse the funding cuts?

It says in the article she spoke to him about funding.

Good PR, Mrs Hannbeck. When was the last time we had a PM visit a pharmacy?