10,000 pharmacies expected to be FMD compliant by end of month

Martin Sawer: Community pharmacy is doing a good job when it comes to the FMD

All major wholesalers are already compliant with the Falsified Medicines Directive, and around 10,000 pharmacies will be by the end of February, according to the wholesaler body.

The EU’s anti-counterfeit legislation, the Falsified Medicines Directive (FMD) – which came into force on February 9 – requires all pharmacies to be able to scan barcodes on medicines packaging at the point of dispensing.

To meet the directive, pharmacies have to register with SecurMed, the non-profit organisation managing the UK’s medicine verification systems.

The number of community pharmacies registered climbed from less than 6,300 on February 12 (see image below) to 6,800 by Tuesday (February 19), according to the SecurMed website.

Martin Sawer, executive director of wholesaler body the Healthcare Distribution Association (HDA), claimed there are another 1,400 pharmacies in the process of registering. He predicts “about 10,000 locations in community pharmacy will probably be registered by the end of the month”.

SecurMed approval means the organisation has successfully tested a pharmacy’s link to the UK hub, Mr Sawer told C+D after his presentation at the Sigma conference in Muscat, Oman, on Monday (February 18). 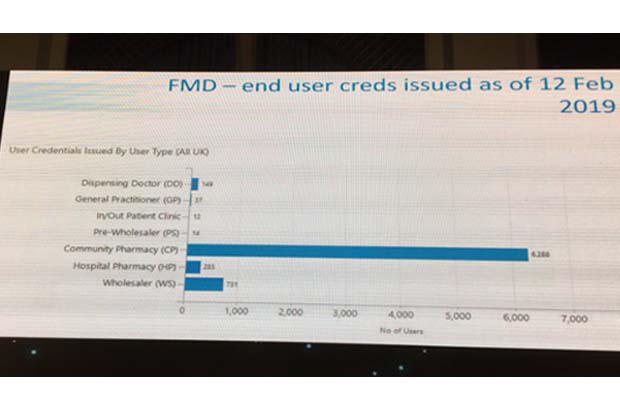 The data shows that all wholesalers and approximately half of hospital pharmacies have registered with SecurMed, Mr Sawer explained.

GP surgeries were delayed in registering, as they were agreeing a way of including the FMD model in their NHS systems, he added.

But Mr Sawer expects “they’ll be ramped up pretty quick”, while registrations of dispensing doctors are “climbing”, he said.

“Community pharmacy is doing a good job,” he added.

FMD compliance to be included in GPhC pharmacy inspections
18/01/2019 | 8 | News
4 Comments
Question:
Is your pharmacy registered with SecurMed?

community pharmacy is doing a good job again for free and have to do it because they are threatened with inspections from not only the GPhC but also the MHRA and there are fines for non-compliance. my CCG GP lead did not even know what FMD meant and what it is all about. they have not even thought about it yet. when was the FMD deadline??? was the deadline only for the community pharmacies????? I am still waiting to read or hear any reprimand for a GP practice not being compliant. Has anyone come across one????

No because they won't be.

Funny how dispensing doctors are not doing this. Who would have thought?

I don't remember reading how the law was changed to exempt them so I'm guessing they were given a "rain-check". Why are we always the mugs?

"GP surgeries were delayed in registering, as they were agreeing a way of including the FMD model in their NHS systems, he added".

in other words, not a chance in hell till you pay us to do it