Lloyds chief: Use technology to 'release the genius' of pharmacists

Cormac Tobin: We need to bring our patient offering into the modern era

Technology should be seen as an "enabler" to help "release the genius" of pharmacists and pharmacy teams, the managing director of Lloydspharmacy’s parent company has said.

Speaking at a Pharmacy Show session in Birmingham earlier this month (October 8), Celesio UK's Cormac Tobin said technology would "release the genius of our pharmacists", taking the pressure off and giving them the time to do more "clinical work".

There should also be “cross-sector collaboration” between GPs, NHS trusts, pharmacy bodies and pharmacists, he continued.

"Everybody needs to understand each other's needs and come up with a compromise so that patients' experiences can be transformed to being meaningful in the modern era." 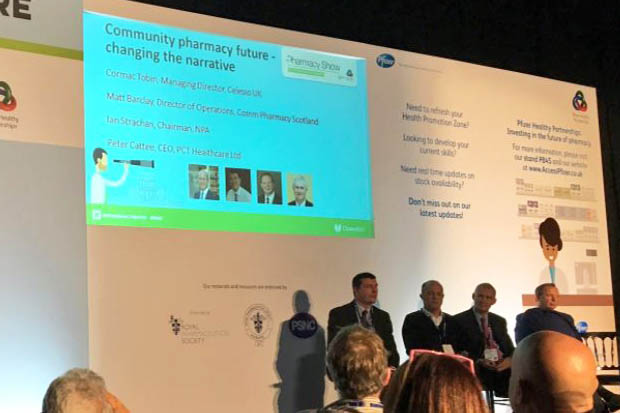 During the session Mr Tobin was joined on the panel by National Pharmacy Association (NPA) chair Ian Strachan (pictured above, far right).

Mr Strachan said that while technology "has a place" in the future of pharmacy, it is "naïve and irresponsible" to think that if technology becomes "centralised" it would not "circumvent the independent sector".

But this would be to the "detriment of all the qualities and abilities" of pharmacists, Mr Strachan argued, as "the most important thing" is "face-to-face contact with patients".

"I'm not against technology and we're not against innovation, but you've got to be careful," he stressed.

"For me it's about protecting the independent network. It's a balancing act. Not all digitisation is in the interests of the sector," he added.

Also on the panel was Peter Cattee, CEO of PCT Healthcare and chair of the Association of Independent Multiple Pharmacies (above, second from right). He said there would be an "inevitable move to technology" in community pharmacy, but he would like to see it implemented "from the bottom up rather than the top down".

"We've centralised a lot of processes over the years," Mr Cattee said. "The monitored dosage system is the obvious thing to centralise," but doing so with other pharmacy services would have to be managed "slowly".

Does pharmacy need one voice?

Moving onto the topic of representation, Mr Tobin said the sector needs to be "integrated" under "a single leadership body", as the number of groups speaking for community pharmacy made the future unclear.

However, Mr Cattee said: "I think it's perfectly legitimate that there are different interest groups where the lines divide in all sorts of ways."

"I've never really seen any great problem in bringing the voice of all of us together in one place, and the natural place for that for me was always the Pharmaceutical Services Negotiating Committee (PSNC)."

However “PSNC needs to find a way to re-engage with government” because “there's no real engagement with the profession whatsoever”, he stressed.

Catch up on all the tweets from the Pharmacy Show with C+D's Storify.

Sue Sharpe: 'GPs should be demanding community pharmacy helps them'
11/10/2017 | 8 | News
11 Comments
Question:
What technology is likely to be embraced by pharmacy in the next five years?

Mmmm, freeing up genius for £15.00 per hour I was quoted for a pharmacist salary a couple of years ago. Last paid that in 1980's, I don't think they have pharmacists interests at heart. Really?

I don't know where to start. The average RAM for their computers is 252MB. My current mobile phone is 16G, more than the total space on their average computer. You wanna scream whilst waiting for the computer to sluggishly move from one file to another. Yet everything is dependent on this 1980s contraption. Filing is still cardex in 2017 and it's unbelievable. Yet we had infrastructure payments prior to EPS1 and EPS2. An average good computer costs £500 & yet this impresario being quoted talks about technology. If we can do year 2005 technology we can turn this profession around. At times it's not advisable to open your mouth when you are not a recognised leader on the subject matter. I can safely say this man sits at the top of a dinosaur and might not have the clout to discuss this. My grandfather used to say if you are led by ignorance the only way is down. We are there already and we hear these muffled noises about an alien subject called technology

The duplicity of his remarks makes me want to vomit. A quick poll perhaps? Q. How many community pharmacists who work for Lloyds feel as if they are respected as the "geniuses" the Boss apparently thinks they are? Vote up if you think that Lloyds doesn't give a damn about you as a person. Vote down if you think I'm wrong and that they really appreciate you and have a long future planned for you ahead.

The government don't seem to attach any benefit to bricks and mortar pharmacies that allow regular patient contact, MURs, NMS, frequent discussions regarding medicines, etc...and neither do pharmacy leaders. Both Well and Lloyds more than happy to be led by the nose towards medicines delivery by post. Well in particular embracing hub and spoke (no doubt over time reducing the number of spokes) and rolling out online ordering...

...I'm not convinced patients will agree though...but over time they be nudged in the right direction

Use technology to release the profits tied up in pharmacist's salaries was that?

That's right, so he can then pay back the £ millions they owe to the HSE in Ireland...

What did they get up to in Ireland?

I was recently in a Lloydspharmacy as a patient, I have been associated with that branch for the last 20 years, at least. I saw its opening times shrunk over the years, as their number of staff diminished, the products on their shelves get thinner and thinner (only 1 or 2 deep now), with no sign of their prices becoming more competitive. I was never once offered a MUR or NMS, my request last week to have my repeat prescription ordered and collect from my surgery was refused ... all in all, a very forward looking company eager to look after their customers?

Mr Tobin's world is a dream, he is a grocer trying to run pharmacies; profit is his motive force, not the future of pharmacy. The only way he is persuaded to invest in technology is when it improves his bottom line, not because it would make pharmacy better.

He speaks with a forked tongue. He is a businessman, and will stretch and extract to the maximum, and put profits before people.

The sooner they are forced to shrink their estate the better.

Avoid working in their dispensig factories. There is never any time to provide proper satisfactory clinical serviices.

Are you suggesting Cormac is not quite telling the truth when he makes these pronouncements?

No single voice their then, looks like some have the government ear and lobbying for change and other's are on the outside looking in. Leave you to choose which one?