Half of C+D Salary Survey 2015 respondents from Boots and Lloydspharmacy express doubts over the future under their new parent companies, while three quarters of Co-operative Pharmacy employees remain positive

Employees at the big three multiples are divided in their opinion of their new parent companies, the C+D Salary Survey 2015 has revealed.

Around half of respondents working for Boots and Lloydspharmacy expressed faith in the chain's owner, while for the Co-operative Pharmacy this figure was a little less than three quarters.

The results of the survey, which ran from September 29 to November 11, followed high-profile takeovers of all three multiples over the past couple of years. 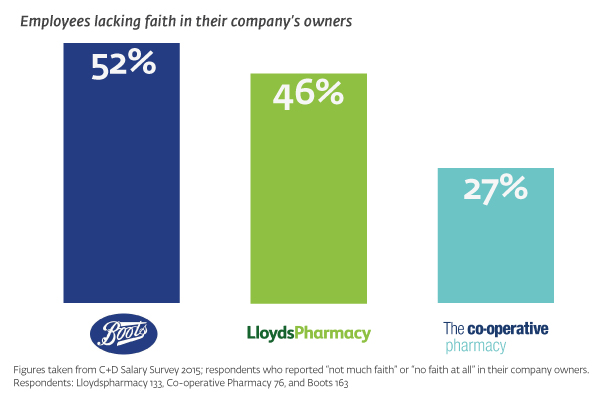 Of the 163 Boots employees who responded, 18 per cent said they had "no faith at all" in its American owner Walgreens. Just over a third said they had “not much faith” in the US pharmacy giant, which bought half of Alliance Boots’ shares in 2012 and took full ownership of the company in January.

Boots UK said any period of change came with uncertainty, but stressed that it had a “very similar background and approach to pharmacy” to Walgreens, with a “strong focus on customer-led care”.

The multiple added that members of its Pharmacists Partnership Panel, a representative group of Boots employees, had been to visit Walgreens. It expressed hope that there would be “more opportunities to share and learn” between the companies in the coming months.

Lloydspharmacy employees were only slightly less dubious over new owner McKesson, with 31 per cent of the 131 respondents saying they had "not much faith" in the American company and 15 per cent reporting "no faith" at all. The multiple struck a deal with McKesson in October that, despite initial resistance from shareholders, is due to be officially completed “shortly”.

Of the three national multiples, Co-operative Pharmacy employees were the most positive about its new owner. More than six in 10 respondents said they had a “little bit of faith” in Bestway, which bought the pharmacy chain in July. Twenty per cent of its 75 employees who responded to the survey said they had "not much faith" and 7 per cent said they had "no faith at all".

The Co-operative Pharmacy said it was "great to see" the majority of employees had faith in its new owner and said communication had been a "huge focus" during the transition to Bestway ownership.

But one respondent expressed disappointment over Bestway’s decision to cut pension contributions, revealed by C+D in November. “New pressures are already emerging,” he said.

Reckon your company is the Best Place to Work in Community Pharmacy? Make sure everyone knows it! Visit bestplacestoworkpharmacy.co.uk for a chance to be named in C+D’s 2015 list of the sector’s top employers.

How much faith do you have in your employer?

Posted on Mon, 02/02/2015 - 17:59
Surprised C&D hasn't had anything to say regarding Stefano Pessina's remarks about a Labour government. I am sure that he is a registered voter, pays all the UK income tax that he morally should and is fully entitled to express an opinion. Whoops, my mistake, he's a billionaire who lives in the tax haven of Monaco.

Posted on Sat, 31/01/2015 - 08:29
Any situation involving new owners will always bring a atmosphere of concern because it is something that is happening to you without your "consent". This is borne out of uncertainty and where there is uncertainty, it is usually those with a negative view who are the most vocal. All any employee can do is bide their time until they get a clearer picture of what the new owners' strategy is. New owners can help the situation by giving as much information as possible to their staff. Of course, whether or not the staff believe what they are told is a different matter (When the pharmacy I work in was sold, I was very unsettled by the whole process. As it turned out, it was the best thing that could have happened)

Posted on Thu, 29/01/2015 - 15:56
Life as a pharmacists as now changed for the worst with growing demands and demanding work loads and a massive reduction in income.Compared with other professions where is the future.Will pharmacy ever recover from the bleak times currently experienced by pharmacist I only hope the powers that be see sense and give the pharmacist the respect they deserve.