NMS could save NHS £500m in the long-term, academics predict

The new medicine service (NMS) could save NHS England more than £500 million in the long-term, a team of academics has concluded.

Lead researcher Professor Rachel Elliott, from the University of Manchester, said the study not only showed the first five years of the service could ultimately save the NHS £517.6m, but also improved medicines adherence by 10%.

The team – made up of academics from University College London (UCL) and the Universities of Nottingham and Manchester – also calculated that the service has saved the NHS £75.4m in the "short-term".

The study assessed patients' “self-reported adherence” to medicines 10 weeks after being prescribed them, which the team considered “the minimum time required to demonstrate behaviour change in a sample of 503 patients”.

Professor Elliott said the figures are "conservative", as the researchers had taken factors such as patient recruitment bias into account.

“This is a simple intervention which has been popular with community pharmacists and patients, and is transferable into most therapeutic areas.”

“We strongly recommend that NMS should continue to be commissioned in the future,” Professor Elliott said.

From the inception of the service in 2011 to August 2016, 3.59m consultations have been claimed for, according to the researchers.

"Could be used more" 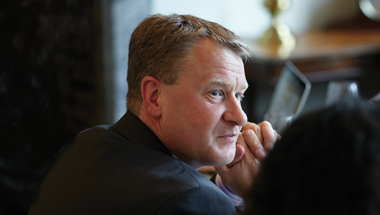 However, he said the service “could be used a lot more”, if other healthcare professionals referred to pharmacy patients. Mr Hunter told C+D that the average pharmacy in Nottingham is currently running four NMS consultations a week.

“[NMS] is not well understood,” Mr Hunter said. “It is an underused resource.”

“It is a way of recouping income that is being lost to other [funding] changes, but it is also the right thing to do and good for patient care.”

“[With NMS] we can grow community pharmacy’s potential more than we currently do, and demonstrate its contribution to the health economy like we have never done before.”

Royal Pharmaceutical Society English pharmacy board chair Sandra Gidley said the research provides a “resounding endorsement of the benefits to patient care and the NHS” that the NMS provides.

Ms Gidley called for the list of medicines covered by the service to be extended to cover all long-term conditions, including mental health issues.

“We would also like to see more patients referred into the service by primary or secondary care providers,” she added.

Pharmaceutical Services Negotiating Committee (PSNC) chief executive Sue Sharpe said with current pressures on the NHS, it is “vital to use community pharmacists to help support GPs and other parts of the healthcare system”.

“Many people depend on medicines to keep them well, and we are committed to developing community pharmacy to support them,” Ms Sharpe said.

Report argues set fees for pharmacy services are ‘perverse'
03/01/2017 | 4 | News
9 Comments
Question:
How many NMS consultations do you conduct a month?

Nearly every pt i speak to is going back to see someone Gp/nurse/hospital in 2 to 4 weeks, Duplication and box ticking, have you seen the form on the proscript system to tick off???!!   Madness.  Same with MURs.   Trying to find us a job and show our 'value'    Yes, the occasional MUR might be useful, but not 400 a year, every yr!  Absolutely no evidence they provide any major benefit.   As we get more practice pharmacists over the next 5 to 10 yrs I expect all this to be phased out in community and us to become lower paid multiple wage slaves, and second class citizens to the GP practice pharmacist and a massive scramble for these jobs and IP qualifications. Because of their higher status and better wages. Two tier community starting already. (You have been warned, prospective students being good kids and doing your research on here!  Hopefully?!)

I agree mostly with what you said, Angela, except for the 'higher status' bit. I see IPs as someone I don't want to see, a cheap and nasty second class pretend doctor, certainly 'lower status' to a first class pharmacist.

As a NHS patient, I have never had an NMS, MUR or an appointment with the compliance police, I wonder if the Professor can tell me how wasteful have I been?

It's a complete waste of taxpayers money, 99% of patients have no issue taking there medicine and when they do have an issue they saw the Dr about it.
I honestly think that I have hardly saved the NHS anything in all the time the service is running. I just wish DoH would scrap them and MURs while they are at it, then they can get on dreaming up the next ridiculous idea to find a use for us, at r moment it's all the waste of time hoop jumping for quality payments.

Complete nonsense, service is duplicated with the pharmacist and doctors both mionitoring the initial useage of the medication. Along with the "Annual MOT" branded MUR'S  both services are a waste of taxpayers money, in absence of an independent audit .

With the majority of "M.U.R.'s" there is no evidence of positive benefit or outcomes for the patient., with most of them finished off with "N.F.A.", coupled with a filling of the coffers of the contractors, who keep all the fee profit!!.

A de-comissioning or change in service specification of such services is long overdue!!!

What a load of absolute rubbish! If the academics came down from their ivory towers for a day at the coalface they'd soon realise MURs and NMS are nothing but a box ticking exercise hoisted on overworked pharmacists by greedy multiples to extract as much as they can from the hapless taxpayer.

I fail to see how this grossly over estimated  and fanciful figure was arrived at , but there again , sensationalism is a sign of the times .

Try and think of any other business where if you save them £500m the reward for this enterprise is precisely ZERO.