Cross Pharmacy in Inverkeithing took home the pharmacy design award at the C+D Awards 2020 following an extensive renovation. C+D visited to see what they had done and why it was so unique. 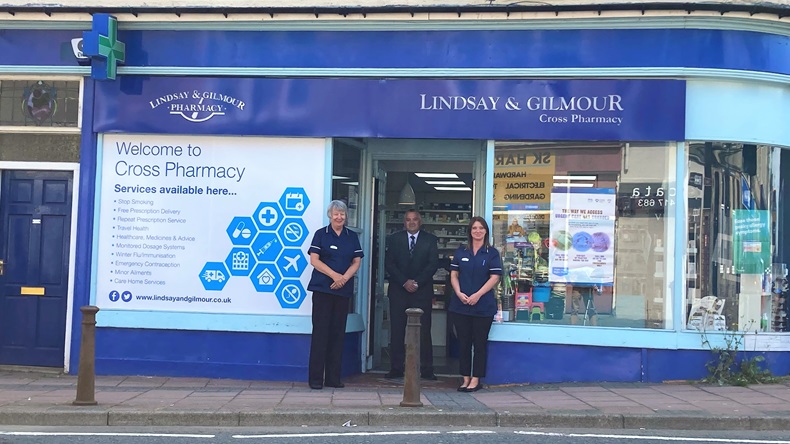 Inverkeithing sits as a small, coastal village on the northern side of mouth of the river Forth, about a 20-minute train ride over the Forth Bridge from Edinburgh. In this unassuming town, however, a recently renovated pharmacy is ready for the area’s future health needs.

The makeover, which cost between £150-200,000, “allowed us to really grow the pharmacy business here”, Philip Galt, managing director and superintendent for Lindsay & Gilmour, the small multiple that owns Cross Pharmacy, tells C+D. The crown jewel of the renovation was the conversion of the basement cellar into a specialist dispensing hub for local care homes.

However, Mr Galt says the investment was not driven by profit margins. “In any sort of situation, we would obviously do a business case, but it’s not a black and white. For us, this is an investment that will pay itself back in, I don't know, 10 years. It gives us a pharmacy that's fit for the future.”

According to Mr Galt, the care home dispensing hub came about after a local care home group, which runs about a dozen care homes across Fife, approached the pharmacy about improving the standard of care they offered.

“They were looking to see how they could improve the how they're looking after the residents, essentially,” Mr Galt tells C+D. They now use an electronic medicines monitoring system, which “lets their staff spend more time with the residents and less time on medicines administration”.

The care home dispensary was a way of “having the environment that is fit for purpose and making sure that you are able to manage the [prescription] volume in a safe and an effective and efficient way” he adds.

Prior to the renovation, which took place between August and September 2019, the basement had been used as a storage space – “it was pretty grim,” says Mr Galt – but now also holds a kitchen and welfare area for staff, which was vital during the depths of the COVID-19 pandemic.

Not only has the care home dispensing hub increased the volume of prescriptions Cross Pharmacy is processing but has also lead to more jobs in the area. In the initial excitement, Cross Pharmacy had around six people working in the hub, but this has since gone down to three as the actual demand for the service became clear, with the other technicians redeployed elsewhere in the business.

And, Mr Galt explains, the refit also allowed the team to better accommodate patients and carers who visit the pharmacy.

“We understood that, as dementia was becoming more prevalent [in society], we wanted to do whatever we could to make sure that our pharmacies were as dementia-friendly as possible,” he says. “It was interesting because it was small changes that could make a big difference.”

As opposed to the cream-coloured plastic walls of the past, the colour scheme of the pharmacy is now designed to soothe those with dementia, with gradual colour changes across the pharmacy, allowing carers to pick up prescriptions with those they care for in tow. Staff have also been trained to be dementia friends.

Another innovation was the introduction of a monitored dosage system to help patients on multiple prescriptions, which Mr Galt describes as a way of “keeping people out of care [and hospital] for longer”.

“It's quite a labour-intensive thing for us to do, but we do it because we believe it's an important service for the patients, and there is a bit of a demand for it, too. Even for carers using that to help support the person they're looking after, it helps them as well, because it's less risky for them.”

Watch the video to see the other transformations

More space for patients and staff

Perhaps the most striking difference to the pharmacy is the dispensary. Whereas it was once hidden behind a wall, only accessible through a small window, the dispensing counter is now open plan and spacious.

Not only does this make the staff more accessible, Mr Galt says it has improved security “because of the increased visibility”.

Another key change in the renovation, which also has improved security, was the consultation room, which was moved slightly to occupy a larger space. Where the old one was so small “you had to stand up” and “wasn’t actually a consultation room at all”, the new room has enough space to offer a “full range” of private services. This is paying dividends: in its awards submission, Lindsay & Gilmour said revenue from private services had grown 200%. A sliding glass window in the dispensary door can also help with methadone supervision.

“We don't need to have [staff] in here; [the patient] can come in and we can we be there,” Mr Galt explains. “Certainly, some of the substance misuse patients can be quite challenging. So, it's good for protecting staff safety.”

Mr Galt stresses, though, that while the renovation was undertaken to make a modern pharmacy, it was “sympathetic” to the pharmacy’s past. Alison Beveridge, who has been working at the pharmacy for 14 years and living in Inverkeithing for around 40, was able to explain the pharmacy’s transition from an old sweet shop to small independent, before being bought by Lindsay & Gilmour around 20 years ago.

“The old shop was so dark and dull,” Ms Beveridge comments. “It’s like night and day the difference.”

An old coal chute that was uncovered during the refit has been preserved and is now boarded up, as well as old wallpaper “dating back many decades”, which Lindsay & Gilmour said had generated a local “buzz” during the refit.

When Cross Pharmacy was fully renovated, one of their oldest patients was the guest of honour at the official reopening. And overall, feedback from locals has been positive. “They've loved what we've done in the space,” Mr Galt says.