C+D joined a group of trainee pharmacists who gathered outside the General Pharmaceutical Council’s (GPhC) headquarters in Canary Wharf, east London, to protest over the most recent exam issues. Catch up with all the coverage below. 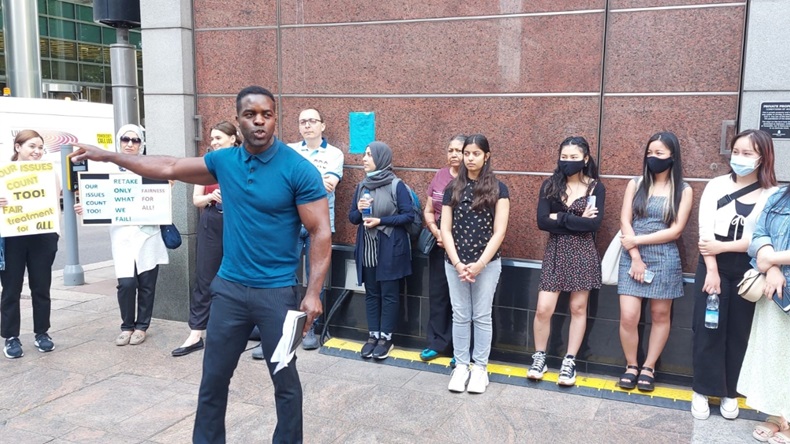 A delegation of trainees met with the GPhC before the protest

How did we get here?

The “majority” of the circa 2,700 candidates who sat the exam last month faced no issues, the General Pharmaceutical Council (GPhC) wrote in previous statements.

But the GPhC estimates around 240 candidates were affected by delays at different exam sites.

Besides delays and IT issues, trainees also flagged concerns around cheating, inappropriate exam environments and the toll the exam had taken on their mental health.

Since June 29, the GPhC has published several statements detailing how it was planning to remedy  the issues, including confirming provisional registration as an option for some eligible candidates who were affected by a delay of 30 minutes or more before being able to sit one of both exam papers.

The GPhC is also “considering” issues flagged by candidates who had concerns with how their sitting was managed and is also carrying out investigations into the problems fed back by candidates, it said last week.

What is happening today?

Pharmacist and tutor Marvin Munzu – who organised the protest – along with a delegation of four trainees will first meet the GPhC’s CEO Duncan Rudkin and director of education Mark Voce at 10.15am, according to an agenda shared with trainees and confirmed to C+D by the GPhC.

The meeting will give trainees an opportunity to share their experiences directly with Mr Rudkin and Mr Voce, Mr Munzu explained.

From 11am, Mr Munzu will then kick start the protest, which will see trainees unite to put forward three key requests, which Mr Munzu listed during a webinar in preparation of the protest on Monday night (July 11).

“This is the basis of our protest,” Mr Munzu said during the webinar.

“We want to get the GPhC to accept our three requests, so it’s important that you know what these are, so that we’re all united for the protest,” he added.

He reminded all those who are planning to attend to behave professionally at all times.

The protest is scheduled to end at 1pm.

Join C+D on Instagram Live throughout the day to hear from attendees at the protest.

See C+D's tweets from the event below.

That concludes C+D's coverage of the registration assessment protest today. Thank you all very much for joining us – stay tuned for further updates and interviews with trainees over the coming days.

13:45: "Feeling positive" – catch up with C+D's interview with Marvin Munzu after the protest

13:40: "Peaceful protest in the interest of fairness and justice"

Great contributions from #traineepharmacists to voice their concerns about the #gphcexam.

Well done to Marvin and his team for the excellent organisation of this peaceful protest in the interest of fairness and justice 👏 https://t.co/hXLPx7HRm5

Definitely well done to Marvin and his team for organising such a monumental & peaceful protest regarding @TheGPhC #registrationassessements for trainee pharmacists.#FairResultsForAll https://t.co/zpsavb8z3B

13:24: "We are competent trainee pharmacists"

"The GPhC genuinely seems to want to help the trainees", Marvin Munzu says

"We had a great meeting with Duncan," Marvin Munzu tells C+D. Follow our interview live over on Instagram

"We protest for fairness and equality. We are not fighting against the GPhC, we are fighting for fairness," Marvin Munzu tells protestors

@TheGPhC peaceful protest in Canary Wharf London, trainees alongside @marvinmunzu want answers to the questions we have. We need change from the Gphc @the_pda @rpharms @ChemistDruggist. We need to be heard and want actions from the Gphc, no more automated emails from you. pic.twitter.com/l3A49NnHs0

More trainees have come forward to share their experiences of the exam:

Another trainee: "I've sacrificed my family life, my husband supported me, I was confident to sit exam and pass... not to sit a paper that's shocking" #gphcexam

Another trainee: even pharmacists who've been doing their jobs for years agreed they wouldn't have been able to answer to some #gphcexam questions pic.twitter.com/myV09PnZQV

Commenting on the issues experienced by trainees in a statement published yesterday, Royal Pharmaceutical Society (RPS) president Claire Anderson said, the RPS remains “deeply concerned about the situation” and “urges the GPhC to offer a resit opportunity for candidates well before November 2022”.

“This would be fair to all and limits the impact on candidates’ progression to full registration,” she added.

The RPS is also calling on the GPhC “to liaise with the Home Office to ensure that any affected candidates working under a visa are fully supported with their continued right to work”, she said.

“We’re fully aware of the additional supervisory burden provisional registration will place on pharmacy teams already under considerable stress. We’re also concerned by the precedent this may set for future sittings. We therefore also call for the GPhC to issue clear criteria for the future use of provisional registration in such circumstances, so that candidates and employers have clarity.”

The GPhC must also “publish the findings of the independent review in full, including a robust mitigation plan to minimise the impact of any future issues”, she added.

“This must include the provision of paper copies of the assessment to all centres and the development of a spare set of assessment papers for use in emergency situations,” she said.

To support candidates, the RPS will be offering all those who do not pass the June assessment, or who chose to abandon their attempt on the day, an extension of their associate membership until December 2022, at no additional cost. It will also be issuing a new Ontrack 30 day free trial for those who would find additional revision support helpful.

Another trainee claims their mitigating conditions - which she was entitled to for medical reasons - were overlooked by the GPhC, which later apologised.

There must be a guideline that we follow. We need a blueprint.

We were shocked on the day of the exam, I became unwell and didn't do paper 2, another trainee says #gphcexam

Another trainee: "We were given an exam that we were never exposed to."

GPhC should have given us similar questions that would have appeared in exam, he suggests

"How were we expetp have 3 minutes per question when we had so much to read" pic.twitter.com/oH8rW2zr6n

Here's what we know about the meeting held between GPhC and pharmacist and tutor Marvin Munzu so far:

The meeting was supposed to be 30 minutes but went on for over an hour.

Mr Munzu says this shows @TheGPhC is willing to listen.

About the GPhC meeting.

"We've asked for fairness and equality. This issue didn't only happen in Nottingham, there were bigger issues, technical issues, many of you suffered from anxiety", Mr Munzu says#gphcexam

Heartfelt testimony from trainee who is devastated by the how the exam was handled.

Fully qualified in Iraq... but he decided to come to the UK and complete the course to be equipped with qualification and experience in UK.

Protesters have three asks:
1. Students who fail should not have this exam counted as one of their three attempts.
2. Issues other than severe delays should treated as grounds for appeal.
3. Trainees should only have to repeat the specific paper they fail.

"I’ve never seen so many trainees complain about a calculations paper as this year," Marvin Munzu says. He receives a large applause after he announces "today is the day we speak up". Tune in to our Instagram Live to follow the protest here.

Protest organizer Marvin Munzu has joined protesters after meeting with the @TheGPhC.

He says “this is a national issue. This country needs pharmacists.” https://t.co/6jtbJwbO9B

Marvin Munzu is here! And kick starting the protest

"This will go down in history"#gphcexam

The protest is underway! Join our Instagram Live from GPhC HQ

We've been told that Marvin Munzu, the organiser of the protest, and a group of delegates are still in meeting with the GPhC, so the protest will start a little later than planned#gphcexam #protest https://t.co/EZhkt46eBY

As new reports of mishaps occurring at the GPhC’s registration assessment continue to emerge daily, earlier this month, C+D spoke with trainee pharmacists about their experiences sitting the exam. Read their testimonies here.

The meeting between the GPhC and pharmacist and tutor Marvin Munzu – who organised the protest – along with a delegation of four trainees has overrun. The protest is expected to begin shortly.

Good morning and welcome to our live blog, following the GPhC protest as it happens. We'll keep you updated as the day goes on - stick with us for up-to-the-minute coverage, analysis and reaction.

GPhC confirms which exam candidates will be offered provisional registration