Revealed: The average locum pharmacist rate across the UK in 2018

The average hourly pay rate for locum pharmacists across the UK increased 79p in 2018, but most locums remain dissatisfied, according to the latest C+D Salary Survey.

The 316 locum pharmacists who completed this year’s survey – which ran throughout October 2018 – had an average hourly pharmacy locum rate of £21.63.

This 79p increase is more than double the 34p increase seen in 2017 – the first increase in average locum pay recorded in almost 10 years, according to C+D Salary Survey data. 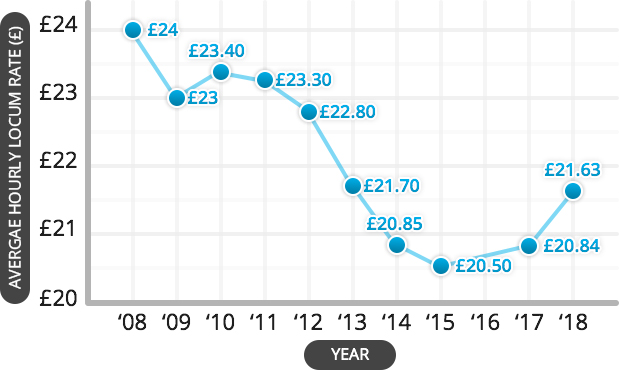 Wales recorded the fourth highest average rate of £22.43; however, this was a 7p drop on the average hourly locum rate in 2017.

Two other areas recorded a drop in average rate. The largest drop was in Northern Ireland, which fell 57p to £16 – the lowest average locum rate across the UK in 2018 – followed by south-east England (excluding London), which fell 13p to £21.27.

Despite the average hourly rate rising for the second year in a row, C+D’s Salary Survey revealed that 63% of locum pharmacist respondents are dissatisfied with their pay. In contrast, just 4% said they are either “very satisfied” or “more than satisfied”.

Pharmacists locuming in Northern Ireland were the least content – with 88% of respondents dissatisfied. Meanwhile, more than 70% of locums in the Midlands, south-east England (excluding London), and south-west England were dissatisfied with their locum rates.

Who is to blame for low locum rates in the UK?

Of the dissatisfied locums across the UK, 44% blamed their employer for their pay rate. One respondent claimed the multiples are “instilling poor ethos in community pharmacy, using pharmacy rates as a bargaining tool, as opposed [to] championing excellent care and service”. Another respondent claimed that “large pharmacy chains are trying to constantly reduce rates”.

Locums also cited an oversupply of pharmacists from university, locum agencies, and “other locums” as reasons they are dissatisfied with their current rates.

How easy is it to find locum work?

The C+D Salary Survey revealed that locums in London had the most difficulty booking shifts compared with last year, with 57% of respondents in the capital stating it is now either “a little” or “a lot” harder finding work.

Although Northern Ireland had the lowest average locum rate, and the highest level of dissatisfaction among pharmacists, locums in the country did not find it harder to find work. In fact, almost two thirds (63%) of respondents found it easier compared with 2017.

See how locums are faring across the UK in C+D’s interactive pharmacy locum map.

The C+D Salary Survey 2018 – the largest survey of community pharmacy, and the biggest in the survey's 11-year history – ran throughout October and was completed by a total of 1,916 pharmacists and pharmacy staff. C+D's ongoing coverage from the survey can be found here.

£45/hour paid for locum for a Friday 2 weeks ago just to keep a branch open. Rates are up £25-30 at the South West since summer and still stores are closed brcause of not having pharmacists

Agree. South west is the worst hit, due to the picturisqe locations of many pharmacies and not many Pharmacists (locums) living in this area. Always difficult find a locum on short notice (even 1 month is not enough) So, have to get the locums from out of area (where surplus of pharmacist and no locum work) and have to pay for accommodation + high RATE.

Your links lead to a breakdown for locum pay last year, not this year as is implied

Thanks for pointing this out. The links are now to the 2018 map, or to our previous Salary Survey coverage where this is stated.

This is absolute rubbish, I cannot think of a single contractor paying more!! Clearly some bad reporting or a botched research attempt

We do..... I think some locums need to move out of the oversupplied big cities..