Lloydspharmacy has pulled a marketing email from its campaign following concerns that it incentivised patients to sign up to its Echo delivery service.

The particular email – see below – encourages patients to “invite a friend” to sign up to the multiple’s mailing list, and in turn both parties receive a £10 gift voucher to spend in a variety of stores or donate to charity.

The email goes on to ask whether the reader knows anyone who could benefit from Lloydspharmacy’s Echo delivery service – “free NHS prescription delivery, dose reminders and nudges to reorder – repeating the call to “invite [a friend] and start earning rewards”.

Lloydspharmacy has now stopped circulating the email, it confirmed to C+D. 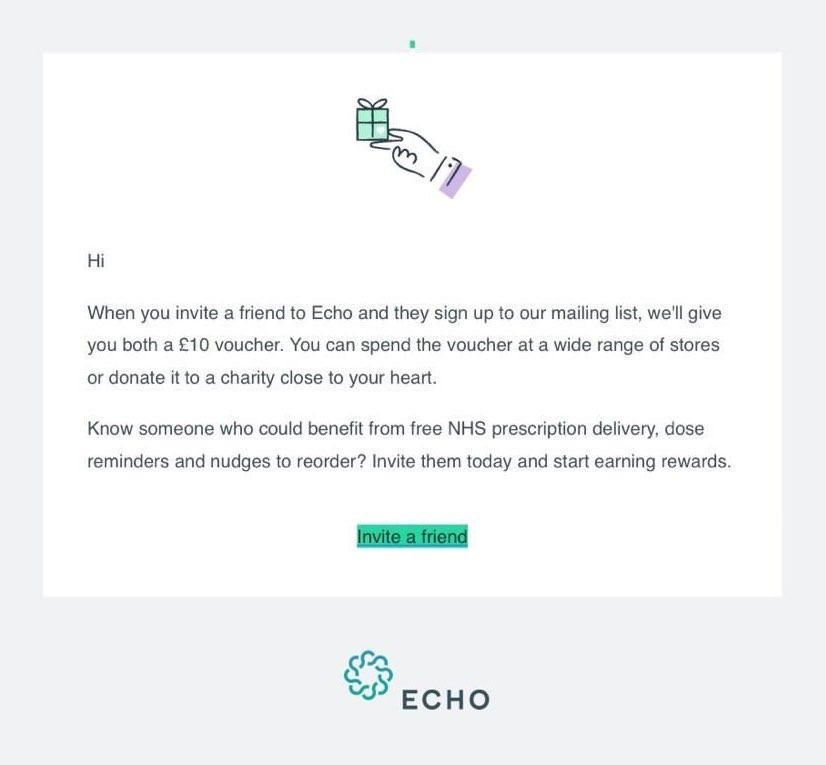 Olivier Picard, owner of three-strong Newdays Pharmacy group in Berkshire, tweeted that the email in question was an “attempt by Echo pharmacy to induce patients to sign up to their NHS Rx services” which is “against the code of conduct and all NHS rules”, he added.

Dr Leyla Hannbeck, chief executive of the Association of Independent Multiple Pharmacies (AIMp), told C+D that “contractors (small and large)” had also raised concerns about the email and AIMp was “liaising with relevant authorities and discussing [the issue] with Lloydspharmacy”.

Responding to the claims, a spokesperson for Lloydspharmacy said: “It has been brought to our attention that an email to our existing patient database has raised some concerns.

“People are eligible for the incentive if they sign up to the mailing list; they do not need to nominate Echo for their prescriptions. However, to avoid any confusion to our patients and partners, this particular email is no longer running,” the spokesperson confirmed.

In a separate complaint concerning an Echo television advert, Shinali McCusker, pharmacist director of Sefgrove Chemist in London, has written to the General Pharmaceutical Council (GPhC) after a patient felt “the advert was misleading, and showed pharmacy on the high street as making mistakes”, she told C+D.

In the complaint letter to the GPhC – seen by C+D – Ms McCusker said: “After watching the advert, I felt very insulted, betrayed that Echo continuously portray brick and mortar pharmacies in a bad light,” and she called on the regulator to “investigate”.

Responding to these claims, Lloydspharmacy said: “In the scene in question, the mix up is down to the male character ‘Noah’ and his forgetfulness to pick up the correct bag when having tea with a friend in a café.

“The scenario makes it very clear that the mistake happens at the café and is Noah’s fault,” the spokesperson added.

The multiple stressed that: “Echo is part of the Lloydspharmacy family, and we consider community pharmacists our colleagues. 7,000 patients per week using the Echo app choose to collect their prescriptions from their local pharmacy.

“Our priority is to offer the most convenient choice to our customers be that delivery, or collection. We see our service as a useful complement to the essential services provided by pharmacies at the heart of communities.”

The GPhC said it did not wish to comment at this time.

'The GPhC said it did not wish to comment at this time.'

Unfortunately some of us are victims to incentivising patients and don't know that we are doing it, for example consider our so called Free Delivery Service; if patients use our NHS dispensing service, we incentivise them by offering to deliver it for free, yes for FREE, now is the time and oportunity for all of us to get our house in order...

Unfortunately the damage has been done. They can stop sending more emails but can they retract those already sent? What about those emails sent by the so called referre patients? In this country it seems the big boys get away with anything. Lets see what GPhC has to say.

Totally agree.Yet again big Pharma get away with breaking rules.Echo have got away with it,knowing it would take time to get the e mail looked at by authorities,who fail again and again.Retrospective action?GPHC too scared to upset one of the large chains,me thinks

Do you consider Echo to be "big pharma"? And you believe there is a sinister conspiracy going on here? Perhaps Bill Gates is controlling it all from his evil lair.

Numark portrays online pharmacies in a bad light. So is that OK, or not?

I couldn't believe it when I got sent those posters. That was a dreadful campaign. No pharmacy should publicy criticise another pharmacy, online or otherwise.

This point doesn't really relate to the first half of the article though, where Echo clearly breached the code of conduct by offering vouchers.

And in any case, “The scenario makes it very clear that the mistake happens at the café and is Noah’s fault", and this is true. It does not portray the high street pharmacy as having made a mistake. However, if you look hard enough, you can find offence in anything.

It's almost surprising the email didn't ask them if they fancied some codeine linctus...