The average hourly locum rate is now at an eight-year low, the Salary Survey 2016 has revealed

Hourly locum rates are at their lowest in eight years, figures from C+D’s Salary Survey 2016 have shown.

The average hourly locum rate is now £20.50, according to responses from 252 locum pharmacists who completed the survey, which ran between October 16 and December 21 last year.

“At the sharp end”

Pharmacy London chief executive Rekha Shah – who works as a locum part-time – told C+D she was unsurprised by the figures. “We have had locum rates dropping year on year for a while now and it’s worse in certain parts of the country – London being one of them,” she said.

Linda Yearsley, managing director and owner of agency Team Locum, told C+D that locums are always on the “sharp end of market forces” because the demand for locums only rarely outstrips their supply.

“I don’t think any other health professional would accept a 20% salary decrease over a five-year period. [But] that’s what certain locum pharmacists have been forced to face up to,” Ms Yearsley said.

Locum pharmacist Perry Melnick said that, while he had not personally experienced a drop in rates, there was “a feeling” that rates were falling and it was difficult to negotiate them upwards.

How have locum rates changed?

The graph below shows an overview of how locum rates have dropped over the years. 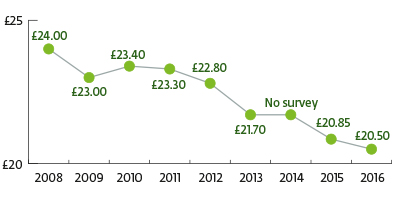 Last month, Tesco wrote to its pharmacy managers to inform them the supermarket will decrease the rates it pays locum pharmacists from July, with rates due to drop by as much as £3.50 an hour in some areas.

Tesco told C+D it made the changes following a review, and remains committed to offering hourly rates that are “competitive within the industry”.

Meanwhile, Well Pharmacy apologised to locums after one of its co-ordinators said in an email that the company had been “getting a lot of noise” from locums seeking to renegotiate their pay rates over the Eid festival.

Well chief operating officer Tim Davies told C+D that the content of the email “in no way represents the views and opinions of Well”.

Have you noticed a drop in locum rates?

Now retired, thank goodness!  When I was working as a locum my local dentist threw it all in and opened a bed and breakfast place in Somerset. he ended up making a lot more money than me. I never had the foresight to join him, worseluck.

writing was on the wall 8 years ago.

I am qualified for 25 years and now have to find an alternate career or be insulted by 'can-do' area managers who aren't half as capable as myself but don't realise how the multiple expliot them and the pharmacists they employ as cheap comodities.

Time for a new contract set on a minimum base level and the increased revenue shared between owners and a lower percentage poassed to employees.

Your locum rate only drops if you let it. If everyone stays saying no I want £24 an hour then that is what you get, its when you persuade newly qualified and other pharmacists they are not worth it that the rate drops, and you have to be good at what you do why would they pay you £24 + an hour to do the same job or worse that someone earning £20 an hour does

A friend of mine owns his own pharmacy and has never dropped his locum rate. Guess what? His locums happily do ALL his MURs.

What we need is to start from scratch with a strong union just for employee pharmacists & locums. Then we can go on strike. Until pharmacists start sticking together it will only get worse.

This has been said several times,but has never been put into action. Time to strike on alternate days at random!!., I am sure we shall be able to bring about a positive change.PDA should take the lead

My mechanic charges £40/hour - he doesn't take any s*it, has more work than he needs and answers to no one except himself.

Don't forget the distinct lack of travel expenses either - we now have to pay for the priviledge of getting to work!

May be there should be a regulation on the number of Pharmacists qualifying? Its just a thought!

Maybe some community pharmacists need to realise that 2003 - 2006 was a one off distortion of the market and natural equilibriums are now being achieved. As wages continue to fall and workloads continue to rise, the composition of the employee/locum community pharmacist population will change. People of a certain background, of a particular upbringing and of a given sensibility will leave the profession. The pharmacy course will acquire a new reputation within homes of those who wish to see their children achieve a particular socio-economic status. Indeed, it has already begun and we will see the results soon enough. The delusions of grandeur, long held by so many pharmacists, are now being dismantled by the reality of falling wages and worsening conditions.

Any 'delusions of grandeur' disappear on your first day at work in my experience.

The cream will leave the job, leaving behind the c*ap. Watch standards fall...

Some of undergrads posting here can't even spell - it's started already!

its so sad that student dnt take our genuine wards, even my own family wont they think we lie. if gphc PDA or RPs dnt do much most pharmacist will leave and they may see that as less pharmacist will pay to them.. their fee

It is so sad that students do not learn punctuation.

I strongly belive  that the gphc or PDA  should take action and left the profesional, i.e there has to be a limit, we are forced to get as low as possible, with such a stress it is not worth it? dispenser locum get £12/hours some pharmacist that I know gets £15/hr what a joke

I agree but if current GPhC proposals are anything to go by there will be parity. There is no bottom. I am doing my best to educate those expressing an interest in this 'career' to the realities. I spoke to a couple of guys (1  yr on register) who hate it already and talking of moving on

Locum rates are always contentious - some shifts, as commented by Angela , are 100 items a day, get your lunch, very pleasant, thank you. Others are 6 times as busy and running around like your hair was on fire. Given that the skill set for both is broadly the same, should they attract different rates? You can argue both sides of the point easily. I also think that the demand for services (eg flu) needs to be taken in to account by both locum & contractor . Some LPCs are finding flu training but ultimately who should fund this? The contractor, so they can ensure continuity of service, but the locum then has a transferrable skills which competitors may benefit from, of the locum, who will get no direct reward for up-skilling? Whatever is decided, both locums & contractors need to remember that they need each other and should try to work to mutual benefit. However, that is quite a foreign concept, since Pharmacy is pretty much based on competition between contractors

The gifting of special cartel privilege is always contentious - some contractors owning a monopoly in a certain area whilst providing quite a terrible service. Another pharmacist is denied entry to this area simply on the basis of a reduced ability to obtain credit to outbid the monopolist. You can argue that those who provide the best service should obtain the greatest market share - just like every other comeptitive business on the high street today. So I assume your final sentence was unadulterated sarcasm.

It gets worse. Tesco managers have been telling their locums they won't be booked if they don't take part in the flu service. Tesco, however, are expecting locums to pay for their training themselves. I am assured by head office that this won't be the case and that it is not mandatory to offer the service. I think they forgot to tell their managers because I know locums are either having their shifts taken off them or have been told that they will not be booked from October onwards.

Don't offer the service.   You're exposing yourself to an additional risk if you offer it and you would be stupid to offer it if you don't get paid for it....

shifts are not a god send you have to be seen to provide value in this competitive enviroment. Good pharmacists who can do many services and are good with customers will never be dumped as they add value....the days of just getting a certificate and expecting to coast through life are gone.its competition time just  like other industries.....law, finance etc.

You are correct, competition is vital, I'm glad you agree that control of entry must be abolished immediately. You are also correct in stating that you have to be 'seen' to be providing value and not empirically prove your value. I'm sure this disgusts you as much as it disgusts me and you similarly would like to see NMS and MURs abolished. Great post, thank you.

The rate may well be £20.50 but in 2016, but it's real spending power has decreased to £16.38 if you facror in the cost of living and inflation. So in real terms locum are about £4.60 worse of compared to 2008, which means doing more hours to buy what we could do 8 years ago, effectively 25% worse off. If someone told you that they would cut your wages by a quarter eight years ago you would have found something else to do. Sad state of affairs.

maybe this is good news - sharing the burden of cuts - more to come tho i suspect.

With the more than doubling of work-load over the last decade or so, at what point are people just going to start to walk away?  £20, £18, £16?  I think after a 5yr course post A levels, £20 should be the minimum we are offered. But I know of one small chain paying £14/15. Are contractors so hard up, even after the cuts come in that they cannot afford to pay us a professional wage anymore? Would a contractor or owner be happy to work for £15 per hour? Personally, I blame the Universities for the explosion in pharmacy schools. They will be responsible for destroying the profession they claim to care so much about!

it is people like you accepting low rates that has driven rates down.

thing is there was never a real sliding scale based on prescription volume - contractors paid one rate whether 100 or 1000 items per day (was in such a place recently no extra pay so won't be making a habit of it). So while the lower volume pharmacy was better paid in the past they still had to pay the same .Whether I can dispense 100 items per hour upside down or on one leg  is irrelevant. There is a fast food culture now an increasingly irate and aggressive public. A sit down lunch is a fantasy in many localities when you ask for it - because too many meekly agree to the prevailling conditions with over supply of pharmacists