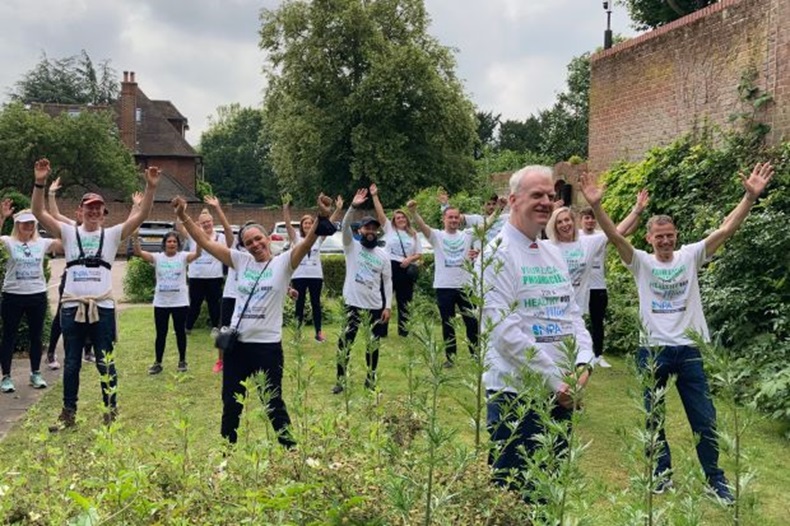 NPA staff preparing for their walk around St Albans on Friday, July 2

The National Pharmacy Association (NPA) has celebrated its centenary year with a charity walk and a “100 cheers for 100 years” event to raise awareness for mental health.

Starting at 11am on Friday (July 2), NPA staff simultaneously set off around Cardiff and St Albans, walking to as many of its member pharmacies as possible in 100 minutes.

Outside each pharmacy, they gave three cheers for the pharmacy and its staff, for the pharmacy’s contribution to the wellbeing of the local population, and for their wider role in the COVID-19 pandemic.

The event was held to raise money for mental health charities Mind, the Scottish Association for Mental Health (SAMH) and Inspire Wellbeing in Northern Ireland. The campaign also aims to raise awareness of the support pharmacies give to people with mental health issues.

Already, three pharmacies in Cardiff have donated £300, £150 and £110 respectively to Mind as part of the event, the NPA said.

“We’re using the centenary not just to celebrate the fact that we’re fundraising for mental health charities, but what we’re really doing here is celebrating the fact that our members have gone the extra mile through the pandemic,” Mr Lane told C+D during the walk.

Asked why the NPA had chosen three mental health charities to raise money for, rather than a pharmacy-specific charity, Mr Lane said: “The pandemic has affected a lot of people in healthcare and affected their mental health.”

Mr Lane said he hopes the NPA’s relationship with Mind will extend beyond the centenary year and become an ongoing partnership.

He said: “You’ve seen a successful relationship between Boots and Cancer Macmillan, for example. And I said, 'Why wouldn’t we as the NPA have someone that we could adopt as our charity?'”

The NPA staff were joined at the end of the walk by local MP and deputy leader of the Liberal Democrats, Daisy Cooper.

She told C+D: “From my interactions talking to local pharmacists in St Albans, people are coming in to talk about their own mental health, because they know they can go in [to a pharmacy] and there’ll be a sympathetic ear.

“As in so many other sectors, community pharmacies are battling the big giants while doing a huge amount of the valuable face-to-face work with local residents, who are often very vulnerable,” she added.

"We are here to help"

Setting off from the NPA’s office in the centre of St Albans, Mr Lane’s first stop was at iMED pharmacy, owned by Puja and Jay Tanna. As well as running a pharmacy, they have operated a COVID-19 vaccine centre since January, delivering around 2,000 Oxford/AstraZeneca and Moderna jabs a week.

Ms Tanna told C+D that the pharmacy’s vaccination clinic had had the most marked effect on mental health.

Not only have they seen the number of calls the pharmacy receives rise to as many as 600 a day – a large proportion of which are vaccine related – they also have 30 volunteers a day working on shifts. Many of those volunteers, they said, got involved because they were stuck at home alone in lockdown.

Mr and Ms Tanna said they would be making a donation to Mind, not only from their pharmacy, but also individually.

Following this, Mr Lane and his team walked to Quadrant Pharmacy and then on to Meera Pharmacy. Meanwhile, two other members of staff jogged to pharmacies on the outskirts of the city, while another group walked to a further eight pharmacies in the city centre.

Similar events are planned in other regions throughout the rest of the centenary year, all themed around the number 100.

In August, NPA board member for the south-west, Nick Kaye, will be attempting to run 100 kilometres, while one of his children performs 100 random acts of kindness and another does 100 sponsored laps of a BMX circuit.

What else would you like to see the NPA do during its centenary?