Pharmacist trainees gave their all in preparing to pass the General Pharmaceutical Council (GPhC) exam. Following the chaotic June 2022 assessment, they’ve demanded action so that their sacrifices were not in vain 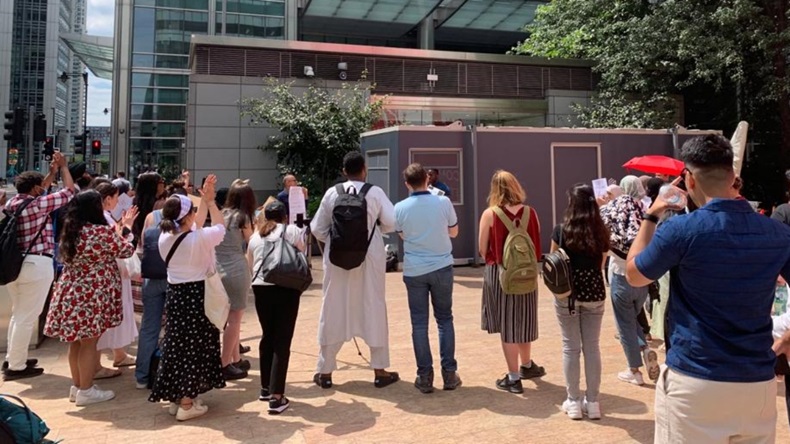 A group of trainees gathered to protest outside the GPhC office in Canary Wharf, east London, last week (July 13) following a registration exam on June 29 that saw some candidates facing exam delays and others claiming that some sitting the exam had cheated.

Read more: Catch up with C+D’s coverage of the protest here.

Trainee pharmacists came to the protest with three main asks:

While some addressed the crowd, megaphone in hand, to share their experiences of the assessment, others approached C+D in confidence – or to speak off camera – to explain the extent to which they had to put their personal lives on hold for this exam.

Here are their accounts.

No time for children

A trainee, a single parent of two children, told C+D they had “put all my life [into] this trainee year”, having sacrificed valuable time with their children on weekends to prioritise revising for the June assessment, “to have a better life for them and me”.

After sitting the exam, “I feel like I’m going backwards rather than forwards”, they added.

They told their children “I’m going to be all yours” after the exam, as June 29 drew closer.

This was their first attempt sitting the exam and – like many of the trainees C+D spoke to – they were diligent in preparing for it.

“I felt confident to sit the exam,” they told C+D.

Despite the months of revision, the time and money spent doing mock exams, and joining online platforms for clinical calculations, they panicked when faced with the calculations paper, which they felt “[didn’t] mirror the normal standard at all.”

Read more: ‘This will go down in history’: Five takeaways from the GPhC exam protest

“I wasn’t feeling okay” while completing the paper, the trainee said, “because while [I was] doing it, I was thinking: 'I'm gonna fail, I’m gonna fail'”.

“I feel like I wasted the time and the money, everything, for an exam which I felt like I’m not going to pass,” they said. “I don’t think that’s fair for us.”

At the protest, many trainees flagged that they had found the calculations paper very challenging, and the protest organiser Marvin Munzu revealed that he and a delegation of trainees had asked the GPhC to review the paper.

“Lived in room” to study

One of the trainees who sat the exam in Wolverhampton – a parent of four –  told C+D they had “lived in [their] room for the last year”.

“I can’t even remember spending quality time with my [partner], let alone my children,” they said. Although they promised their children they would be able to spend more time with them after the exam, the ensuing chaos of the day meant they still had not been able to, they claimed. Now they hope to raise awareness with the GPhC that “it is the lives of people that have been affected” – both of those who sat the exam and those around them.

“My children are just looking at me and thinking, ‘Is it worth it?’”, the trainee said.

Home at 10pm in month leading up to exam

Pharmacist trainee Omar* is married with a young child. “I swear, for the last four weeks before the exam, I didn't come back home until 10pm,” he said.

Being expected to study after spending your all day “on your feet over there in a community pharmacy” while having a family is “not easy”, he said.

The GPhC “should reflect upon this and make sure that us trainees are being treated fairly”, he stated.

Like many trainees sitting the June assessment, Omar thought that “the exam did not reflect the samples provided”.

“I think the exam in itself is outdated,” Omar added, stressing that students should be examined in a way that is more reflective of “real life”.

“The exam is one paper in one day,” he explained, “you can have a bad day, any issues could impact on you”, whereas “being examined on my job is more reflective”.

During his training year – split between community pharmacy and a primary care network – his supervisor examined him while he completed medication reviews as well as long-term condition management reviews.

Unable to “sleep properly” after exam

Another trainee who sat the assessment at a hotel said they felt “cheated” coming out of the exam.

“I can't even explain you what I was feeling” at the time, they said. They reported having to call their partner and their friend to calm themselves down before sitting the second paper.

In the first week following the exam, they were not “even able to sleep properly or eat properly”, they claimed.

They felt more hopeful, they said, after Mr Munzu organised the protest.

“I’m an overseas pharmacist,” they explained. “I did work in my country. Of course I have some ability”.

The trainee also felt that the hotel was not an appropriate setting to have the exam.

“There was a party going on” in the hotel, they claimed, and “there was construction [work] next door”.

Although the trainee’s screen went blank during the exam, they were only informed by fellow candidates later in the day that they should have filled out an impact assessment, they claimed.

Two trainees who sat their assessment in Wolverhampton detailed how “widespread chaos” erupted across the room after some candidates’ computers failed to start as they begun the assessment.

The invigilators did not help matters, one of the trainees claimed, as they “started panicking and calling the head office” and shouting to each other from across the room.

A few candidates’ screens went blank about midway through the assessment, they said, leading to further panic.

When the candidates in front and behind the trainee both experienced technical issues, the trainee claimed that invigilators caused such a ruckus “moving computers from the desks, under the desks, plugging and unplugging wires” that they had to wear earplugs to concentrate.

The second trainee said they felt the invigilators "were clueless as to what to do and how to help”.

“There were wires taped all over the floor, so I couldn’t move my chair back”, they said. “When I tried to make myself comfortable, I was told ‘Don’t move around too much because the wire can come out and the computer will unplug’.

That was anxiety-inducing in itself, the trainee said.

“I developed anxiety from studying pharmacy. These are little things I guess, but they all mount up,” they added.

The GPhC told C+D last week that it was due to discuss the issues flagged by the protesters and would be “in touch with the delegation to update them on our response”.

The regulator is currently investigating the issues identified with its exam provider, the BTL group – such as computers freezing while sitting a paper and allegations of cheating.